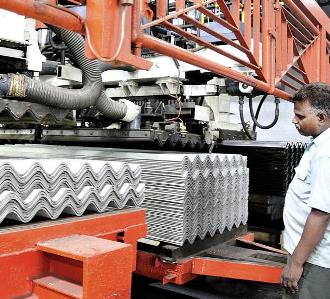 WORLD leading asbestos producers, Zimbabwe and Russia have lambasted the European Union (EU) for misleading the world that the asbestos produced by the two countries poses a health danger.
Russia and Zimbabwe produce chrysolite which scientific research has proved safe.
The amphibole type of asbestos has been prohibited while scientific researches by experts from United Nations (UN) agencies and International Labour Organisation (ILO) and World Health Assembly (WHA) have proved that chrysolite can be used safely.
But the EU in a bid to undermine the countries’ operations deliberately chose not to distinguish the two types and advised the world not to deal with Russian and Zimbabwean asbestos.
Officially launching the Zimbabwe Chrysotile Asbestos position Paper in Harare last week, Industry and Commerce Minister, Mike Bimha said elements peddling anti-asbestos sentiments are deliberately avoiding the distinction between the different varieties of asbestos.
He urged industry and local authorities not to be intimidated by anti-asbestos sentiments.
“It is unfair and unjust for the proponents of the ban to drive their commercial interests at the expense of ignoring all known scientific evidence that shows that Chrysotile is as different from the highly carcinogenic blue and brown asbestos types which have been banned the world over for proven negative health effects,” said Minister Bimha.
“I call upon the construction industry, corporate, government departments’ local authorities, individuals and other users of asbestos products not to be intimidated by anti- asbestos sentiments.
“These sentiments are merely aimed at promoting imports of alternatives whose health risks have not been proven otherwise.”
The world debate on Chrysotile prompted government through the National Chrysotile Asbestos Task Force to craft a position paper to set the policy straight.
The Taskforce upholds the implementation on the control-use approach on chrysotile asbestos, in fulfilment of various domestic and international safety codes in the use of asbestos.
Russia’s third secretary to Zimbabwe, Nikita Buturlin said as the major chrysotile producing countries, Russia and Zimbabwe must raise awareness among the public and stakeholders that white asbestos is not hazardous to health if used under the controlled condition as recommended by the ILO’s Safe Use Principle.
“Unfortunately, the scale of anti-asbestos propaganda in the West, connected with the discovery of carcinogenic effect of amphibole was so intense that it left catastrophic footprints in public opinion,” said Buturlin.
“Let us bring out our position to the world, so the anti-asbestos lobby does not pocket profits by robbing developing countries and deny them their right of access to cheap and reliable building materials.”
Zimbabwe has the best fibre of chrysolite together with Russia, and the two countries have fought hard against a blanket ban on asbestos as the product contributes significantly to their respective economies.
In Zimbabwe chrysotile asbestos, was mined at Shabanie Mine in Zvishavane and Gaths Mine in Mashava.
At its peak, the mines used to employ about 5 000 workers directly excluding subcontractors.
A further 20 000 people depended on the asbestos mines for their livelihood. Of this produce, over 90 percent was exported.
Chrysotile continues to play a critical role in the provision of low cost housing and water reticulations and sanitation solutions.
Its common use in Zimbabwe has been in the area of building and construction as floor and ceiling tile, cement asbestos water pipelines, corrugated paper pipe wraps, acoustical and decorative insulation, pipe and boiler insulation and spray-applied fireproofing.
Meanwhile, Mines and Mining Development Minister, Walter Chidhakwa says the revival of Shabanie Mashava Mines is imminent.
Addressing journalists in Harare this week, Minister Chidhakwa said a report has been compiled by the Zimbabwe Mining Development Corporation (ZMDC) technical team.
“Everything is now set for the revival of Shabanie Mashava Mines,” said Chidhakwa.
“Our technical team from ZMDC has compiled a report on what needs to be done at Shabanie Mashava Mines and the report looks at issues like the equipment needed, and other related infrastructure.”