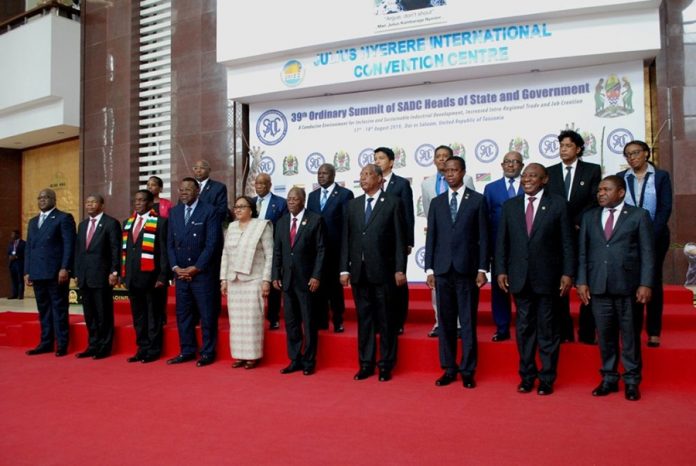 IT is worthwhile to note that the 39th Southern African Development Community (SADC) Summit of Heads of State and Government held recently in Dar-es-Salaam, Tanzania, declared October 25 a solidarity day on which all 16 SADC member states can collectively voice their disapproval of and condemn the illegal sanctions imposed on Zimbabwe by the United States of America, the European Union and their Western Allies.
Having 16 member-states voice their solidarity with Zimbabwe through various activities and platforms is recognition enough that sanctions have really damaged Zimbabwe.
The grouping, was unanimous on the anti-sanctions position “…there was no cause or need for sanctions to continue; after all, the basis for the sanctions to continue are not there anymore and they were illegal at the time they were imposed by Western countries, America and EU,” SADC executive secretary Dr Stergomena Lawrence Tax said.
Moreover, having the SADC bloc speaking on behalf of its 16 members ‘amplifies’ Zimbabwe’s voice and cheers her on to make a stand on the reforms started by President Emmerson Mnangagwa.
The move also confirms what the ruling ZANU PF party has always been saying: That Zimbabwe’s current challenges were both created and compounded by the illegal sanctions slapped on the country by the West, especially the US’ big brother, war monger and world police mentality.
The sanctions have negatively affected the entire economy with the vulnerable and the general populace being the most affected.
October 25 anti-sanctions call exposes the misguided attempt by the US and its agents to lie with a straight face in calling the sanctions ‘‘…restrictive or targeted measures.’’
Furthermore, the anti-sanctions call is a slap in the face for the MDC Alliance, which ostensibly called for the sanctions.
Arguing that there are no sanctions in Zimbabwe and regarding everyone who has been calling for removal of sanctions as dull is akin to witchcraft, which dovetails with the opposition’s mantra of kudira jecha.
The SADC has just shown that the MDC Alliance , its handlers, agents and supporters are on a wrong footing and going in the opposite direction of forces of development.
Anti-sanctions day dents any future offensive by the opposition in the SADC region and on the African continent.
Even the US Ambassador, Brian Nichols, with all his arrogance, confirmed that the anti-sanctions call is “…a solid plan moving forward.”
Having a regional body calling for the lifting of sanctions to facilitate socio-economic recovery in the country shows that Zimbabwe is not alone. October 25 anti-sanctions call is a good platform on which Africa’s suffering is aired abroad.
President John Pombe Magufuli, the new SADC chair, said, Africa “…is like a human body: when you chop one of its parts, it affects the whole body.”
Therefore, the anti-sanctions call opens a new chapter whose reading is that Zimbabwe is ready to engage with the rest of the world but will not suffer bullies.
Analysts opine that having the16 member bloc calling for a lift in the face of the bullying instrument that has adversely affected the entire economy is a necessity.
One academic, Professor Charles Pfukwa, said the move by SADC was long overdue.
“Zimbabwe has benefitted a lot from its linkages and membership with the regional bodies, SADC and AU. When matters impinge on the nation, Zimbabwe’s first port of call naturally should be the regional bodies,” said Prof Pfukwa.
“It is a question of getting an African voice to speak about an African problem and Africa, as a continent, taking the problem to the world.
“The West has been trying to drive a wedge between Africans. In response, Zimbabwe has taken its problem up, bearing in mind that in Africa, an injury to one is an injury to all. Having sanctions as an agenda of SADC is economic integration and more than political.”
October 25 anti-sanctions move is reminiscent of the One Million Signatures in 2011; the anti-sanctions campaign initiated by Zimbabwe.
What sets this one apart is that it encompasses the regional body and is taking place in an environment of current economic reforms by the present Government in line with the ‘Zimbabwe is open for business’ mantra.
A communiqué issued at the end of the 39th SADC Summit noted the adverse impact of the prolonged economic sanctions imposed on Zimbabwe and the region at large and called for the immediate lifting of sanctions to facilitate socio-economic recovery in the country.
Sanctions have reduced the country’s access to foreign credit lines and leverage to process international payments which were supposed to benefit Zimbabwe.
It is believed that Zimbabwe lost bilateral donor supports estimated at US$4 billion in loans from IMF, the World Bank and African Development Bank.
The country also reportedly lost US$42 billion in potential investment since the illegal sanctions were imposed.
Foreign direct investment (FDI), which stimulates economic growth and employment creation in any economy ceased as the country is considered risky.
It has not been easy for the country to trade on the international market as transactions are intercepted and blocked.
For instance, the health sector has suffered from lack of drugs, machinery and infrastructure, most of which could have been sourced cheaply abroad but not all countries are ready to deal with Zimbabwe for fear of a backlash from the US and UK.
Some health programmes supported by international partners were suspended due to the illegal sanctions.
In the agriculture sector, animal health problems have become rampant due to failure to bring in required medicines.
Due to the sanctions, Zimbabwe has become a complicated business environment, closed from offshore lending.
The sanctions, according to President Magufuli, have not only “…affected the people of Zimbabwe and their Government but our entire region.”