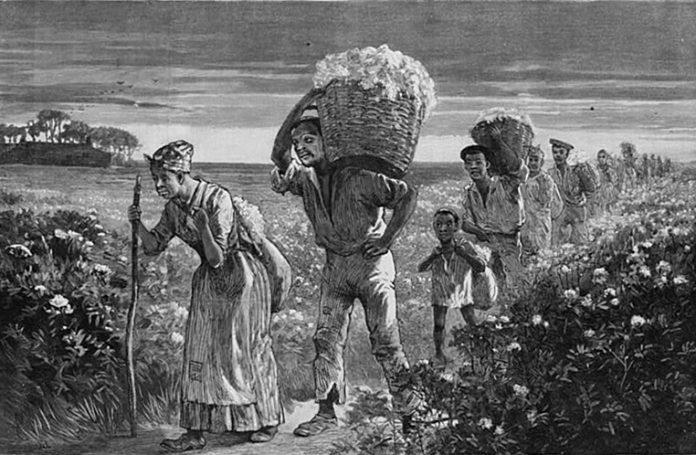 COTTON fields in the South, in the US, were a hellhole for African slaves.

On either cotton or sugar plantations, none was better, for on both, the slaves faced the same brutality from the slave masters.

No one knows exactly how old cotton is. Scientists searching Open Cotton Bollcaves in Mexico found bits of cotton bolls and pieces of cotton cloth that proved to be at least 7 000 years old while its production thrived during the slave trade era.

Arab merchants brought cotton cloth to Europe around 800 AD. When Columbus discovered America in 1492, he found cotton growing in the Bahama Islands.

By 1500, cotton was known generally throughout the world.

The living conditions for enslaved people were determined in large part by the size and nature of the agricultural unit on which they lived.

Contrary to the overwhelming image of the grand Southern plantation worked by hundreds of slaves, most agricultural units in the South, up until about two decades before the Civil War, were small farms with 20 to 30 slaves each.

The conditions of slaves under these circumstances were mostly grouped into the experiences of field slaves and house slaves.

The vast majority of plantation slaves laboured on the fields, while a select few worked at domestic and vocational duties in and around the owners’ houses. Each situation brought its own set of demands, hazards and perks regarding not only labour, but also quality of food, clothing, and shelter received.

Vegetable patches or gardens, if permitted by the owner, supplied fresh produce to add to the rations.

Morning meals were prepared and consumed at daybreak in the slaves’ cabins.

The day’s other meals were usually prepared in a central cookhouse by an elderly man or woman no longer capable of strenuous labour on the fields.

Recalled a former enslaved man: “The peas, the beans, the turnips, the potatoes, all seasoned up with meats and sometimes a ham bone, was cooked in a big iron kettle and when meal time come they all gathered around the pot for a-plenty of helpings!”

This took place at noon or whenever the field slaves were given a break from work.

At the day’s end, some semblance of family dinner would be prepared by a wife or mother in individual cabins.

The diet, high in fat and starch, was not nutritionally sound and could lead to ailments, including scurvy and rickets.

Enslaved people in all regions and time periods often did not have enough to eat; some resorted to stealing food from their masters.

House slaves could slip food from leftovers in the kitchen, but had to be very careful not to get caught, for harsh punishments awaited such offences.

Offences for stealing would warrant the loss of fingers or a large part of the hand.

William Wells Brown reveals how slave owners in Virginia ‘smoked’ slaves: “In his fits of anger, he would take up a chair, and throw it at a servant; and in his more rational moments, when he wished to chastise one, he would tie them up in the smoke-house, and whip them; after which, he would cause a fire to be made of tobacco stems, and smoke them.”

Moses Roper claimed that in South Carolina they used to “…drive nails into a hogshead so as to leave the point of the nail just protruding in the inside of the cask. Into this he used to put his slaves for punishment, and roll them down a very long and steep hill.”

Lewis Clarke, a house slave in Kentucky, described in his autobiography the different methods used by his mistress: “Instruments of torture were ordinarily the raw hide, or a bunch of hickory-sprouts seasoned in the fire and tied together. But if these were not at hand, nothing came amiss. She could relish a beating with a chair, the broom, tongs, shovel, shears, knife-handle, the heavy heel of her slipper, and an oak club, a foot and a half in length and an inch and a half square. With this delicate weapon she would beat us upon the hands and upon the feet until they were blistered.”

States with large numbers of slaves introduced their own slave codes of conduct.

The main idea behind these codes was to keep the slaves in check through tight control.

The death-penalty was introduced for a whole range of offences.

Plantation owners believed that severe punishment would make slaves too scared to rebel.

Famous writer Charles Dickens, on a visit to America in 1842, was startled to read a press advert which read: “Ran away a Negro woman. A few days before she went off I burnt her with hot iron on the left side of her face. Tried to make a letter M” and “Fifty dollars reward for the Negro Jim Blake. Has a piece cut out of each ear.”

This is a good deal of evidence on the brutality that slaves faced in America.

A number of adverts that appeared in the local press in the south laid bare the torture the slaves experienced.

An advert in the Mississippi Gazette (July 23 1836) read: “A negro man who says his name is Josiah, that he belongs to Mr. John Martin, living in Louisiana, twenty miles below Nathchez. Josiah is five feet eight inches high, heavy built, copper colour; his back very much scarred with the whip, and branded on the thigh and hips in three or four places thus: ‘J.M.’ The rim of his right ear has been bitten or cut off. He is about 31 years of age. Had on, when committed, pantaloons, made of bed-ticking, cotton coat, and an old fur hat very much worn. The owner of the above described negro is requested to comply requisitions of law, in such, cases made and provided for.”

St. Louis Gazette (November 6 1845) read: “A wealthy man here had a boy named Reuben, almost white, whom he caused to be branded in the face with the words; ‘A slave for life’.”

Depending on the state, the punishments varied; like beating with a stick, sometimes to the breaking of bones, the chain, an iron crook about the neck or a ring about the ankle as well as confinement in the dungeon.

There were instances of slitting of ears, breaking of limbs so as to make amputation necessary, removing of eyes and castration, among other inhuman practices.

Clothing, distributed by the master, usually once a year and often at Christmas time, was apportioned according to sex and age as well as the labour performed by its wearer. Children, for instance, often went unclothed entirely until they reached adolescence.

Elderly slaves who could not do physical labour were not given shoes or extra layers of clothing during the winter.

The relationships of slaves with one another, with their masters, with overseers and free persons, were shaped by the unique circumstances of life experienced by each slave.

Different circumstances surrounded fieldwork. Labouring together in task groups, enslaved blacks might develop a sense of united welfare. Yet, they might also be supervised by a black driver or overseer responsible for representing the master’s interests; a position which could prove divisive within the slave community, particularly because the driver would be obliged to mete out punishment on other blacks.

The lives of enslaved men and women were shaped by a confluence of material circumstances, geographic location and the financial status as well as ideological stance of a given slaveholder.

The experience of slavery was never a comfortable one. Nevertheless, the kind of labour assigned, the quantity and quality of food and clothing received, the type of shelter provided and the form of punishment dealt could lessen or increase the level of discomfort slaves had to endure.

These living conditions not only impacted the physical and psychological state of the slave, but also had effects on the relationships that African-Americans built with each other and with whites.