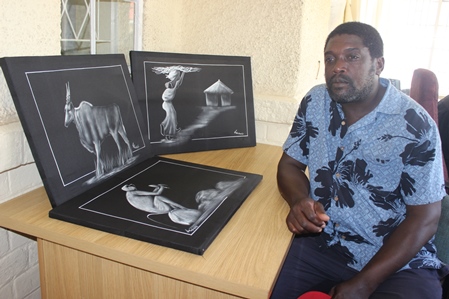 THE burly and bearded artiste gets a commission and instantly delivers; the time span from accepting a project to executing it to completion is barely noticeable.
In five minutes, a landscape full of life, mountains, rivers and wildlife can be produced.
It is art while you wait, more like getting a burger at a fast food joint except that unlike the greasy artery-clogging product, Witness Munyawiri’s delivery is wholesome and gratifying to all the senses.
“I have not allowed the illegal sanctions to destroy my career,” said Munyawiri.
“I decided to bust the sanctions through innovation and came up with the Silhouette painting concept.”
The illegal sanctions imposed against Zimbabwe for embarking on the Land Reform Programme hurt the ordinary people.
And it is not only companies and parastatals that have suffered from the effects of the draconian sanctions.
Artistes that survived on thriving tourism in the 80s and 90s are among those hardest hit by the illegal sanctions.
But artistes like Munyawiri, whose art career began in 1987, have not allowed outside forces that seek to cripple the nation dictate the outcome of their lives.
“Zimbabweans are not only best known for their intelligence and ability to work, but also for being innovative and having spent more than a decade in the arts industry as a painter, there was no way I was going to be driven out of the sector because the West had decided it so,” he said.
“Faced with shortages of materials as a result of spiralling costs and a dwindling market, I chose not to abandon my craft, but adopted a minimalistic strategy that is using fewer raw materials than before, but still producing high quality work.”
While the average painter uses the three primary colours red, blue and yellow and about four brushes, the Silhouette painting concept sees Munyawiri using only white and a brush.
The father of six, who has sent all his children to school with art, has as a result of his technique, become a ‘mobile’ artiste ‘making something in harsh conditions’.
“I can move around with my black and blank canvases producing pieces as per order while the client waits,” Munyawiri said.
“The decision to use white paint on black canvas and a single brush means that I significantly cut down production costs.”
Munyawiri who did not receive any formal training, however, appealed for increased Government support.
“We need Government to allocate us places where we can sell our wares preferably in the central business district so that we do not play cat and mouse games with various authorities,” he said.
“And Government must commission us to do works that preserve our culture.
“Art is educative and an important medium to communicate our values as a people.”