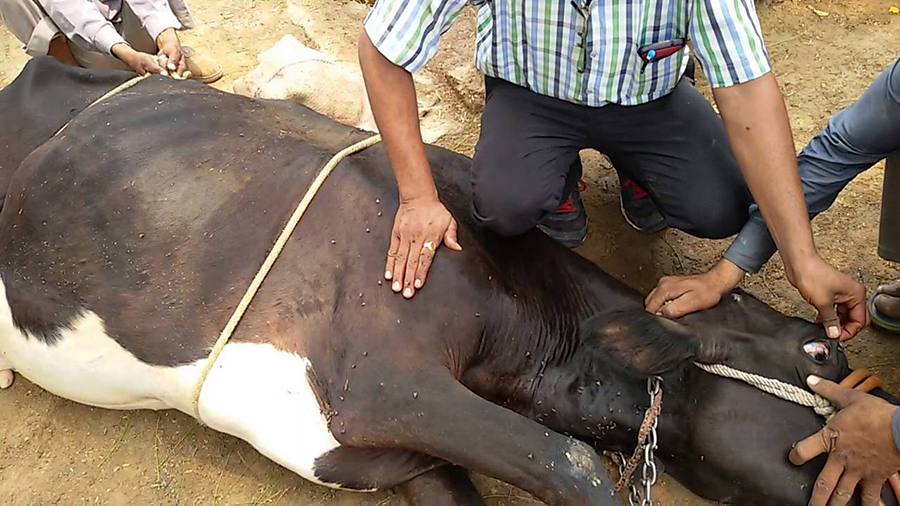 AS the weather grows hotter and wetter across the country, incidences of livestock diseases transmitted by arthropods increase drastically.

Bovine babesiosis (BB) is a tick-borne disease of cattle.

It is a disease affecting cattle and buffaloes caused by babesia bovis; a parasite transmitted by ticks.

It occurs in many parts of the world, but is especially devastating in Asia and Africa where 149 outbreaks of babesiosis were reported in sub-Saharan Africa in 2014 alone.

Economically, it is the most significant arthropod-borne disease of cattle worldwide, with vast areas of Australia, Africa, South and Central America and the US continuously under threat, even though it has been said to be eradicated from that continent.

BB, caused by babesia parasites, is the third-most important tick-borne disease of cattle after East Coast fever and anaplasmosis.

The clinical signs of the disease include, among others, anaemia, fever and haemoglobinuria.

Babesiosis is known to occur in tropical and sub-tropical regions of the world.

As I already mentioned in a general outline of diseases of cattle in my recent ongoing custodial cattle series, this parasite hides in red blood cells and causes them to stick to blood vessels, enabling the parasite to circumvent host immunity and causing acute infection and death.

BB, predominantly observed in adult cattle, is found in areas where its arthropod vector is spread, especially tropical and sub-tropical climates.

Babesia bovis and B. bigemina are more widely dispersed and of major importance in Africa, Asia, Australia as well as Central and South America.

Babesia divergens is economically important in some parts of Europe and possibly northern Africa.

The principal strains are babesia bovis and babesia bigemina, with rhipicephalus ticks being the major vector.

Babesia divergens is also found, with the major vector being ixodes ricinus.

In endemic areas, cattle become infected at a young age and may develop a long-term immunity.

However, outbreaks can occur in these endemic areas if exposure to ticks by young animals is interrupted or immuno-naïvecattle are introduced.

The introduction of babesia-infected ticks into previously tick-free areas may also lead to outbreaks of disease.

At this time of the year in Zimbabwe, a farmer must stay on top of vaccination and dosing programmes as well as take steps to minimise disease problems.

Some vectors transmit diseases to humans and disturb livestock to the point that animals do not feed properly.

As a consequence, beef cattle may suffer weight loss while dairy cows may produce less milk with the risk of serious illness and death increasing.

Middelburg virus and Shuni virus can also infect many species, including horses and wildlife.

Although current babesia vaccine production is cumbersome and expensive, the control of babesiosis is important for smallholder farmers, especially in Zimbabwe, and Africa in general, as it will lead to better livestock health, improved food and nutrition security as well as enhanced economic empowerment for the rural and commercial farmer.

The low incidence of disease was an important factor contributing to over-grazing in tribal areas.

Studies have shown that during the protracted Zimbabwe war of liberation, collapse of dipping services was observed between 1973 and 1978, mainly in areas referred to then as tribal trust lands (TTLs), kumaruzevha, which led to the build-up of populations of B. decoloratus ticks including outbreaks of babesiosis and anaplasmosis.

This occurred between one to three years following the cessation of regular cattle dipping which coincided with the end of the liberation war in 1979.

Reduced grazing pressure after the initial waves of disease resulted in increased grass cover, allowing species such as R. appendiculatus and amblyommahebraeum to become re-established.

Other tick-borne diseases such as January disease, (Theileriosis), redwater, gall sickness and heart water, caused by deadly disease blood parasites, spread from one animal to another by ticks, account for 20-30 percent of cattle deaths in Zimbabwe annually.

These heavy cattle mortalities resulted from lack of immunity to tick-borne diseases as a result of inefficient disease control through lack of dipping in previous years.

Tick-borne diseases can cause heavy stock losses and prevent livestock in disease-free areas from being introduced onto farms with a high tick load.

Babesia and other tick related murrain, tick infestations and tick-borne diseases in Zimbabwe should not bedevil the national herd, especially in these days of advanced technology and access to knowledge.

Dr Tony Monda holds a PhD in Art Theory and Philosophy and a DBA (Doctorate in Business Administration) and Post-Colonial Heritage Studies. He is a writer, lecturer, musician, art critic, practicing artist and corporate image consultant. He is also a specialist Post-Colonial Scholar, Zimbabwean socio-economic analyst and researcher. E-mail: tonym.MONDA@gmail.com