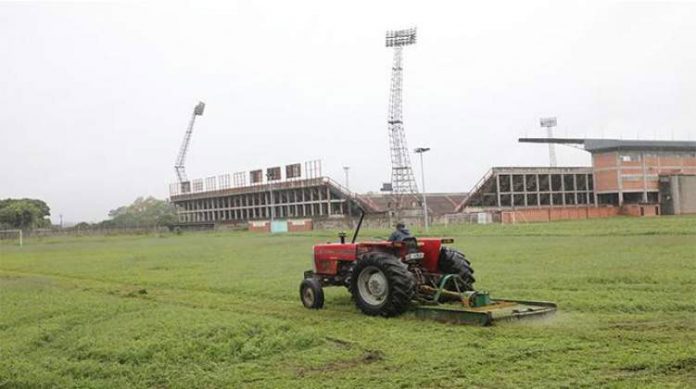 PROGRESS on renovations that have been taking place at Barbourfields Stadium will be the centre of attraction when Chibuku Super Cup winners Highlanders and Castle Lager Premier Soccer League Champions FC Platinum lock horns in a Castle Lager Challenge Cup.

The Bulawayo stadium has been undergoing renovations for the past two weeks after CAF slapped the country with an embarrassing stadium ban for failing to meet international standards.

Away from the disaster that has been wrought on the country by MDC-led councils which led to the ban, the tie promises to be a nail-biting affair as the two teams have roped in some of the finest football minds in the local premiership.

Highlanders are being led by outspoken gaffer Mark Harrison while the eccentric Pieter de Jongh will be in charge of FC Platinum. Their encounter is expected to light up Bulawayo this weekend.

With both teams under the tutelage of expatriate coaches, the match has every ingredient of a thriller to open action for the 2020 soccer season.

The two sides meet after months of massive rebuilding during the season break.

De Jongh has an upper-hand in the match, having coached Highlanders last season.

The Dutchman changed fortunes of the Bulawayo side.

From the time he took over the ailing side, relegation was one of the worries for the Bulawayo giants whom he steered to safety.

De Jongh saw the side finish on position six.

Attracted by his success at Highlanders, the platinum miners were quick to offer the Dutchman a contract as substantive coach ahead of Lizwe Sweswe, the man who held fort after the departure of the great Norman Mapeza.

The Englishman is well-travelled.

He has coached several teams in South Africa.

Highlanders are the third Zimbabwean club to be coached by the Englishman in Zimbabwe.

Drawing similarities between the two expatriate gaffers, the two were both born in December with Harrison being 10 years older.

They have been to several countries, coaching.

Unlike Harrison who has nothing much to show for his coaching in Zimbabwe, the Dutchman guided Highlanders to Chibuku Super Cup glory two months into his contract with the Bulawayo giants.

As league champions, FC Platinum secured the place in the Challenge Cup.

The Zvishavane-based giants are the holders of the Castle Challenge Cup.

On one hand, Highlanders have maintained the bulk of their senior players, adding a few new faces for the season.

Among them are veteran striker Mkokheli Dube from FC Platinum and Michelle Katsvairo who was clubless.

Also to feature for Bosso this season is goalkeeper Chris Mverechena from CAPS United, Cardwell Gawaza and Muziwakhe Dlamini.

On the other hand, FC Platinum have also added a number of players to their squad.

The Zvishavane giants offloaded excess baggage during the transfer window.

With all the best players at the coaches’ disposal, it’s anybody’s game.

De Jongh watched Highlanders’ friendly match with Chapungu last Sunday to see how best he can outwit his opposite number.

However, the friendly match left Harrison fretting over injuries to Prince Dube and Divine Mhindirira who picked up hamstring injuries.

FC Platinum seem to be having a clean bill of health, which is a major boost to start the 2020 campaign with silverware firmly in their sights.

If statistics are anything to go by, FC Platinum are the favourite to win, according on the head-to-head records.

The 2020 premiership season is expected to start soon.

However, the sponsorship package is yet to be unveiled while the fixtures are not yet in the public domain.