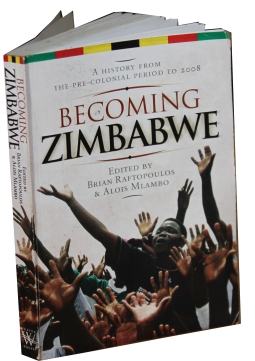 READING the synopsis by Professor David Moore for the book Becoming Zimbabwe, who describes it as, ‘a profoundly new history of Zimbabwe that tears apart all of the old certainties’ raised my suspicions.
Was the book an attempt to rewrite the country’s history or confirming the Zimbabwean history as told by the country’s elders?
Sadly, the book as Prof Moore highlights offers a new perspective on the country’s history that moves away from the general held views.
But is it possible considering one cannot change past events.
The book not only waters down the achievements by indigenes in the development of the country, but portrays the country’s heroes as villains.
It is this very book that has been proposed to be translated into other languages such as Mandarin as it is the ‘first comprehensive history of Zimbabwe’ and to help other nations understand the country’s history.
Becoming Zimbabwe, edited by Brian Raftopoulos and Alois Mlambo has stories from contributors such as Gerald Chikozho Mazarire, Joseph Mtisi, James Muzondidya, Munyaradzi Nyakudya and Teresa Barnes.
The book traces Zimbabwe’s history from 1850 to 2008 with key historical events such as the colonisation, liberation struggle and independence taking centre stage.
The writers chronicle the setting up of the Shona and Ndebele kingdoms, the civil wars, the coming of the British to colonise the country and the involvement of the indigenes in the Second World War.
Mlambo reviews developments in the country in the settler economy and the emergence of nationalism leading to Ian Smith’s Unilateral Declaration of Independence (UDI) in 1965.
According to Mlambo, the unjust treatment of blacks had resulted in the need for them to retaliate against the whites leading to the formation of political parties by blacks.
“Given Rhodesia’s historical background and its racial and ethnic heterogeneity, a sense of nationhood had to be manufactured: to whom should Rhodesia belong and who belonged to Rhodesia,” writes Mlambo.
To maintain the stance of ‘giving a new perspective’ of Zimbabwe’s history, the writers give a ‘new version’ of the liberation struggle and post independence events.
In 1997, MDC leader Morgan Tsvangirai called for the need for a ‘more open and critical process of writing history in Zimbabwe where the history should not be reduced to a selective heroic tradition.’
Could it be this kind of history Tsvangirai was advocating, one that takes away the real Zimbabwean story and give the white man’s flare?
If so this is disheartening.
The liberation struggle defines the history of Zimbabwe, helps its people understand where they are today yet some want it to be a non-event.
The article by Mtisi, Nyakudya and Barnes titled ‘War in Rhodesia’ is riddled by the unsubstantiated material meant to tarnish the image of the thousands of brave men and women who took up arms to fight the Ian Smith regime.
They sing from the old hymn that suggests that the role of women in the struggle was to satisfy the sexual desires of their male counterparts.
That people joined the war not on their free will but were forced by the guerrillas and that the guerrillas torched, harassed and stole from villagers.
Despite it being clear that ZANU PF which played a key role in the independence of the country from colonial bondage, the writers are of the opinion that during the struggle and even after 1980 locals did not support the party.
Muzondidya argues that in 1980, ZANU PF won the war through intimidation
“All the same, the violence and coercion remained integral to Zimbabwe’s electoral politics throughout the first decade of independence,” he writes.
“ZANU PF was widely accused of political intimidation in 1980, especially in the areas where its guerrillas had operated during the war and its supporters also perpetrated widespread violence against the opposition in the 1985 and 1990 elections.”
Could people have been coerced to vote for a party that had helped liberate them, was it not the party that they had supported giving them food, shelter and information.
The authors downplay the events at Chimoio and Nyadzonia in 1977 giving prominence to the Matabeleland disturbances from 1982 to 1987.
They play right into the hands of the white man who pushes the racial card to try and divide Zimbabweans.
Muzondidya advances the misinformed facts about the Matabeleland disturbances propping the version that it was the Government that turned on its people killing more than 20 000 civilians.
Muzondidya describes the period from 1980 to 1997 as the era from buoyancy to crisis.
The writer chooses to ignore the development programmes pushed by the black Government to support its people.
In the article ‘Crisis in Zimbabwe’, Raftopoulos heaps the blame for the economic challenges in Zimbabwe on the ZANU PF led Government.
It is not surprising he omits the effects of the illegal sanctions on economic growth as his agenda is only to tarnish the image of black leadership.
Edmund Burke, a philosopher once said, “Those who do not know history are destined to repeat it.”
It is important Zimbabwe be wary of those trying to hijack the Zimbabwean story and sell it to the world as the true one, after all the real Zimbabwean story can only be told by well meaning Zimbabweans.