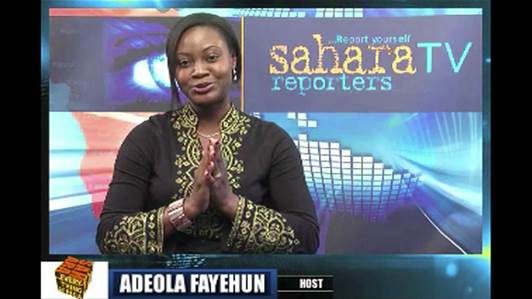 LESS than a minute after her failed attempt to humiliate President Robert Mugabe in Nigeria last week, Sahara TV activist, Adeola Fayehun unwittingly exposed the mission of her act with two poignant and timely statements that; ‘he is too old and very sad’. President Mugabe was in Abuja, Nigeria for the inauguration of General Muhammadu Buhari as president of Nigeria. Fayehun and the rest of her colleagues had specifically stationed themselves in President Mugabe’s path in order to deliver on the mandate they had been paid for by their American handlers, to harm the African Union (AU) Chairman and his delegation. It was an old and tired tactic that we have seen being employed here in Zimbabwe by Morgan Tsvangirai and his acolytes in the so-called civil society to minimal effect. You provoke a person or the leadership and get the result. It was a moment that catapulted her to global recognition which in the first place was the objective of her confrontational activism agenda, but it was the excitement that she showed after her failed mission that left her with more to do because this is Robert Mugabe she was dealing with. Robert Mugabe, that man whose people oriented policies rattled the ‘mighty’ Western world instead left Fayehun with smirk on her face if interviews in the interceding period after her supposed ‘heroic’ act are anything to go by. She has had to justify and explain her shameful anti-Mugabe act to various media organisations almost weeks after allegedly ‘humiliating’ the legendary Zimbabwean leader. If her mission had been successful as we have been forced to believe, why is Fayehun going to lengths in explaining her encounter with President Mugabe? Given our recent entanglements with the West, we know they want results when it comes to dealing with Robert Mugabe. Unfortunately for those who have committed to embarking on this path, the results have always been on the negative. Morgan Tsvangirai, Tendai Biti, Elton Mangoma, and now Temba Mliswa will bear testimony to this fact. And the undeniable fact to these people is that Robert Mugabe, the man the West would love to hate is a brand that brings food on people’s tables. Just ask Morgan Tsvangirai, Lovemore Madhuku and those noisy media outlets that churn out chunks of propaganda day in day out. But beneath the headline accomplishments that Fayehun got, however, there are just as many indicators to suggest Sahara TV continue merely to tread water below the true elite of real journalism.  The message to Fayehun and her American handlers is that after more than a decade of failure to topple Robert Mugabe, Uncle Sam will need more than those clowns at Sahara TV if they are to compete with Mugabe’s formidable juggernaut.  Sahara TV purports to promote citizen journalism and reports on corruption and human rights on the continent, but it is the source of their funding that raises eyebrows. It is funded by Americans. It is their baby. Its links with America are just too many to ignore. Fayehun’s profile is yet another stark confirmation of how deep the American goes in the Sahara TV project. She grew up in Nigeria where she had her elementary, secondary, and a brief university education, before moving to the United States. She received her BA in Journalism and Mass Communication from Olivet College, Michigan, in 2007. She also received her masters in broadcast journalism from the City University of New York’s Graduate School of Journalism in December 2008. Adeola is presently the host of ‘Keeping It Real With Adeola’, a weekly satire show on African politics on Sahara TV, as well as a foreign correspondent for THE NATION newspaper in Nigeria. Curiously, her goal is to make people care about African news, reads the profile. Who says people do not care about African news? Sahara TV confrontation with President Mugabe was not an interview. It was an act of war; a threat to the person of President Mugabe. See how this Ashawo-alike saying to President Mugabe that ‘there is no democracy in Zimbabwe’. Was that the sense of her point if at all she had any? A lecture on democracy in Zimbabwe to President Mugabe by that little girl? How sad? How could she squeal about democracy to an African hero who was democratically elected President barely two years ago in the July 31 2013 harmonised elections? So whose democracy was Adeola talking about? American democracy? Western democracy? What of her getting to less than a metre from President Mugabe and involved in near scuffle with members of his security? What of being paid dirty American money to ask stupid questions to President Mugabe? If President Mugabe was not a democratic leader, that woman would have been given a thorough hiding by members of his security whose mandate was within the confines of their security protocols. In her embellished American thinking, Fayehun foolishly believes that electing new leaders is a sign of ‘democracy’! But even when it comes to elections, Zimbabwe is a shining example of democracy. The power to vote was given to us by President Mugabe and his fellow veterans of the liberation struggle. That power to vote has been successfully complimented by programmes such as the Land Reform and Resettlement Programme and the ongoing indigenisation and economic initiatives. In the practice of democracy in Zimbabwe, the key feature of the Indigenisation and Economic Empowerment Programme is value addition and beneficiation. Fayehun would need to ask her leaders that in a democracy like Nigeria, how does it happen that their country has fuel shortages and that it is found on the black market? None in Zimbabwe will care to listen to Fayehun’s nonsense on Robert Mugabe that revered African hero. The reception he got in Sudan, some three days after Fayehun’s drama proved a devastatingly timed reminder of how much a hero Robert Mugabe is to Africa. Let those with ears listen.