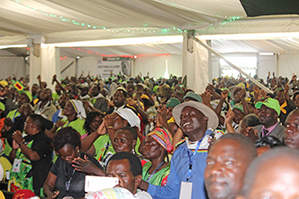 WE were at the ZANU PF 16th Annual National People’s Conference held at the spacious Masvingo Showgrounds last week.
Yes, the heavens opened and pounded much to the delight of the estimated
9 000 delegates who graced the conference because rains bring forth life.
Indeed it was a lively gathering.
A combination of the Party’s leadership and all ZANU PF organs, the Youth Wing and Women’s League, as written in other articles in this issue, converged to deliberate on various issues in line with keeping the Party intact while taking the country forward.
The country’s custodians, chiefs, war veterans, service chiefs, members of the diplomatic community and representatives from various revolutionary movements in the region and beyond were also present at the indaba held under the theme, ‘Moving with Zim-ASSET in Peace and Unity’.
From Masvingo Provincial Affairs Minister, Tete Shuvai Ben Mahofa, Vice-President Emmerson Mnangagwa, Vice-President Phelekezela Mphoko, President Robert Mugabe to Amai Dr Grace Mugabe and every other speaker, unity was the underlying message.
Unity, they emphasised, is the vital cog in the structure that keeps the Party moving forward.
But there was also a special guest from South Africa at the conference, Deputy President Cyril Ramaphosa.
He made quite an impression, not just with his presence, but with a unique message – that ZANU PF and ANC are inseparable because the two are actually bound by the same ideals that drove them to fight apartheid and colonialism.
Zimbabwe, said Deputy President Ramaphosa, played a crucial role in South Africa’s quest for independence hence the ANC was ready and willing to work with ZANU PF to find solutions to common problems.
“As South Africa, we would not have gained our freedom without Zimbabwe assisting us,” he said.
“In 1989, the Harare Declaration was from adopted.
“The Declaration spells out how South Africa was to achieve new Constitutional order.
“The Harare document assisted us to negotiate and bring to an end the apartheid system in South Africa.
“President Mugabe, among other African Statesmen, contributed to the democracy that South Africa is enjoying today.
More than ever before, we need to work together.”
It is imperative to note that in August 1989, the ANC articulated proposals for negotiations in order to do away with apartheid in South Africa.
This became known as the Harare Declaration and it is our understanding the document received international acceptance by the Ad-Hoc Committee on southern Africa from the then Organisation of African Unity (OAU), the Non-Aligned Movement (NAM), Frontline States and the General Assembly of the United Nations. It is said with growing domestic acceptance, this was indeed a milestone in the history of South and southern Africa.
And there was more from Deputy President Ramaphosa that ironically drew the ire of certain quarters when he hailed President Mugabe for his moving speech when he officially opened the indaba.
Said Deputy President Ramaphosa, “When you spoke of corruption, it was like you are addressing the ANC.
“When you spoke about corruption, it was like you were talking to us.
When you talked about factionalism, it was like you were addressing us in the ANC.
“As we leave this conference, we are better people.
“We will take this message and take it to the ANC and tell them that we are dealing with the same problems and emphasise the need to continue working together.
“We derive our legitimacy as leaders only by placing the needs of the people against our own.”
There are genuine lessons from Deputy President Ramaphosa’s message that ZANU PF cadres must take note of especially as the Party gears for the 2018 elections.
Corruption will drag the party down the drain.
It is a cancer that will not only destroy the Party, but the country too and when leaders prioritise themselves ahead of the povo, it becomes a recipe for disaster.
This also came amid revelations at the conference by Public Service, Labour and Social Welfare Minister Prisca Mupfumira that there were some members who were withholding rice from China meant to be distributed to the drought-stricken masses.
According to information gathered by The Patriot, every province was allocated 1 750 tonnes of rice and so far, only Masvingo Province had distributed its share to the people.
“We have the issue of rice from China,” Minister Mupfumira said.
“Other provinces have still not distributed the food aid to people.
“Other provinces are still holding onto the rice.”
Minister Mupfumira said such behaviour was deplorable and ordered those responsible to do the right thing.
“Let it be given to people,” she said.
“We have food for the next eight months, no one will starve.”
However, it is such things that must be nipped in the bud as the Party moves forward.
Factionalism, on the other hand, as Deputy President Ramaphosa said, will not get the Party anywhere and perhaps that is why President Mugabe’s clarion call as he officially closed the indaba was pinned on unity.
Before the conference, the so-called independent media was awash with prophesies of ‘warring factions’ apparently facing off in Masvingo.
However, at the indaba, it seemed to be a case of the media brewing a storm in a teacup.
“Zvinofadza ndezvekuti hapana kumboita nyakanyaka,” said President Mugabe. “Tose takangoita basa redu ziii pasina kurwa, pasina kutukana, tiine ndangariro yekuti zvinhu zvifambe zvakanaka.
“This conference has come a long way in terms of preparing the Party for the 2018 elections.
“I hope after the conference, the Party should now find itself directing more of its energy and resources to being united.”
No doubt the indaba in Masvingo laid down guidelines for all members to fortify the Party.
Discipline, eradicating corruption and factionalism, promoting unity, peace and development are benchmarks for all ZANU PF leaders and members.
This is largely because for the ruling Party, these benchmarks will not only sustain ZANU PF, but will also propel the nation to greater heights.
After all, ZANU PF is a revolutionary Party that has stood the test of time.