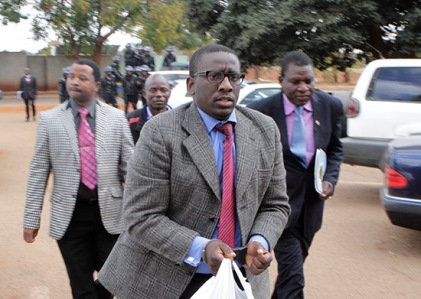 IT is false for Edmund Kudzayi, the guy suspected to be the shadowy cyber character called Baba Jukwa, to claim he played an important role in ZANU PF’s landslide victory in the July 31, 2013 elections.
He made the claim in his statement to the police.
He was with Team ZANU PF for a few months before the elections.
It is the same old and tired argument.
There was much more to ZANU PF’s romping victory than Kudzayi’s few months’ stint at ZANU PF headquarters.
Just as Morgan Tsvangirai might beat his chest because he pronounced the formation of the MDC at some hotel in Harare in September 1999, it does not alter the fact that the idea to form the MDC had been settled a long time before at a meeting at Chatham House in London chaired by British foreign policy advisor, Richard Dowden.
In Shona, we call such people ‘vana muchekadzafa’.
Because as early as 2011, long before Kudzayi arrived at ZANU PF headquarters, in fact during the time he still wrote scathing articles against President Mugabe and his party, we had already foreseen a landslide victory for ZANU PF in the GNU scheduled elections.
Since 2011, The Patriot had persistently compared MDC with Bishop Muzorewa’s UANC back in 1980, how it would suffer the same fate because that is how all colonial projects end.
MDC’s nemesis was time.
It was around long enough everyone saw it was a colonial project.
It is not true that in the face of adversities like the ones that ravaged the country in 2007, people will sell their birthright for a farthing.
What people require during such times of hardship is a resolute and strong leadership.
It is the point that the EU Ambassador Dell Árricia underscored to our intellectuals during a discussion organised by SAPES.
He said there was no doubt ZANU PF provided the strong leadership the country requires.
There was an old man at a funeral in Shurugwi in 2008 after the MDC almost won the elections.
With tears in his eyes, he said ZANU PF needed to go back to the people and reconnect with them because it had alienated itself and abandoned them.
He said the link between ZANU PF and the people was intrinsic and historical. He said the biggest weakness with the MDC was that it was created and formed outside this important historical frame.
He found it difficult the MDC would win an African election because it was opposed to some things that the liberation struggle fought to bring about.
He said the MDC was a white man’s project.
He was an ex-political detainee.
Between 2009 and 2013, war veteran leader, Jabulani Sibanda and his entourage attracted negative publicity when they went around the country to reconnect ZANU PF with the people.
He was accused of terrorising villagers and frog-marching them to ZANU PF meetings.
Sibanda had made the correct decision.
The perfect point for reconnection was where the war ended.
Some of those that attended the meetings said they were reminded of the pungwe during the war.
There was a young woman with a baby on her back at a pungwe in Bikita one night during the war.
She pushed aside the old man on the drum and snatched the lead of the song away from Comrade Bazooka.
We clapped our hands fiercely to the rhythm of the song.
The song told how people died to free the land; why we were fighting to control our resources.
What we found moving was where she got the passion at such a young age.
She was part of the myriad of people ZANU PF alienated and lost several years after the war and needed reconnection.
Perhaps the biggest challenge to face the land reform programme was that many people did not believe it would succeed.
They believed one day, it would be stopped and reversed.
But that didn’t happen so that by 2010, it was clear to everyone land was one of the few things many people called their own.
And it had changed their lives too and everyone could see it. In the end, even members of the MDC went in the middle of the night to ask for land.
The Land Reform Programme was the biggest game changer in the dynamics of Zimbabwe politics.
That is what effectively buried the MDC.
If anyone can still see a political future in the fragmented MDC that has been abandoned by its Western creators and funders, then they don’t know how social phenomenon die.
The West has swallowed its pride and is prepared to re-engage Zimbabwe individually and multilaterally.
That is why Tsvangirai’s recent call for creation of another GNU because ZANU PF has purportedly failed to turn around the economy is a desperate attempt to remain relevant.
Turning around an economy that was ravaged by sanctions to the extent a World Bank official on a visit in 2007 compared it to the aftermath of a devastating war, is not an overnight exercise.
If anyone expected investors to flood in after the elections with briefcases full of money to invest, such a belief was misplaced.
If the American and the French and the British companies did it in Iraq and Libya after the invasions, it was to loot the resources, particularly oil, from those ruined countries that had become mere extensions of the West’s global foreign policy.
It takes feasibility studies, negotiations, signing of MoUs and contracts for companies to eventually invest but there are many indications many people are coming to invest in Zimbabwe.
ZANU PF’s victory in the 2013 general election was deeper and more involved than a single individual effort.