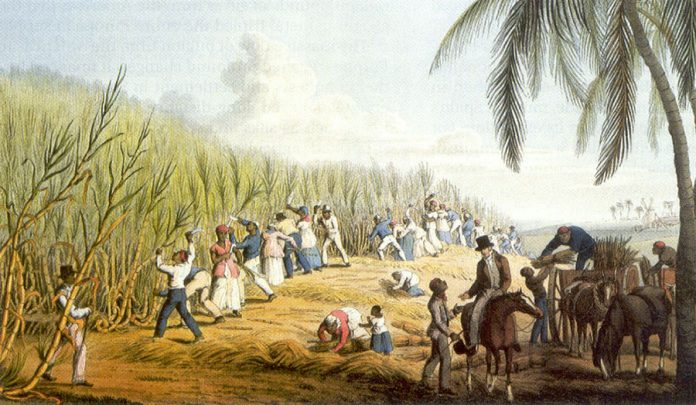 THE British did not initiate, but they came to dominate the Atlantic slave trade.

African peoples were captured and transported to the Americas to work.

World growing economies, the Church and the bourgeoisie, among others, did not question slavery as they were benefitting directly or indirectly.

Most European colonial economies in the Americas, from the 16th through the 19th Century, were dependent on enslaved African labour for their survival.

According to European colonial officials, the abundant land they had ‘discovered’ in the Americas was useless without sufficient labour to exploit it.

Slavery systems of labour exploitation were preferred, but neither European nor Native American sources proved adequate to the task.

The trans-Atlantic slave trade had long supplied enslaved African labour to work on sugar plantations in the Mediterranean alongside white slaves from Russia and the Balkans.

This same trade also sent as many as 10 000 slaves a year to serve owners in North Africa, the Middle East and the Iberian Peninsula.

Having proved themselves competent workers in Europe and on sugar plantations on the Madeira and Canary Islands off the coast of Africa, enslaved Africans became the labour force of choice in the Western Hemisphere.

More than half of the enslaved African captives in the Americas were employed on sugar plantations.

Sugar developed into the leading slave-produced commodity in the Americas.

During the 16th and 17th centuries, Brazil dominated the production of sugarcane.

One of the earliest large-scale manufacturing industries was established to convert the juice from the sugarcane into sugar, molasses andeventually, rum, the alcoholic beverage of choice of the triangular trade.

Ironically, the profits made from the sale of these goods in Europe, as well as the trade in these commodities in Africa, were used to purchase more slaves.

The number of slaves brought to Haiti were more than twice the number imported into the US.

The vast majority came during the 18th Century to work in the expanding sugar plantation economy.

The Haitian Revolution abolished slavery there and led to the establishment of the first black republic in the Americas.

Cuba assumed this position during the 19th Century and, even after slavery was abolished there in 1886, sugar remained the foundation of its economy and its primary export commodity throughout the 20th Century.

Sugar was also produced by slave labour in the other Caribbean islands as well as in Louisiana in the US.

During the colonial period in the US, tobacco was the dominant slave-produced commodity.

Concentrated in Virginia and Maryland, tobacco plantations utilised the largest percentage of ennslaved Africans imported into the US prior to the American Revolution.

The American Revolution cost Virginia and Maryland their principal European tobacco markets and, for a brief period after the Revolution, the ‘future’ of slavery in the US was in jeopardy.

Most of the northern states abolished it, while Virginia debated abolition in the Virginia Assembly.

The invention of the cotton gin in 1793 gave slavery a new life in the US.

Between 1800 and 1860, slave-produced cotton expanded from South Carolina and Georgia to newly colonised lands west of the Mississippi.

After the abolition of slave trade in 1808, the principal source of the expansion of slavery into the lower South was the domestic slave trade from the upper South.

By 1850, 1,8 million of the 2,5 million enslaved Africans employed in agriculture in the US were working on cotton plantations.

The vast majority of enslaved Africans employed in plantation agriculture were field hands.

Even on plantations, however, they worked in other capacities.

Some were domestics who worked as butlers, waiters, maids, seamstresses and launderers, while others were assigned as carriage drivers, hostlers and stable boys.

Upward of 10 percent of the enslaved African population in the US lived in cities.

In the southern cities, they were approximately a third of the population.

The range of slave occupations in cities was vast.

Although most worked directly for their owners, others were hired out to work as skilled labourers on plantations, on public works projects and in industrial enterprises.

A small percentage hired themselves out and paid their owners a percentage of their earnings.

Each plantation economy was part of a larger national and international political economy.

The  cotton plantation economy, for instance, is generally seen as part of the regional  economy of  the  American South.

By the 1830s, ‘cotton was king’ in the South and the US, which was competing for economic leadership in the global political economy.

Plantation-grown cotton was the foundation of the antebellum southern economy.

But the American financial and shipping industries were also dependent on slave-produced cotton.

So was the British textile industry.

Cotton was not shipped directly to Europe from the South. Rather, it was shipped to New York and then trans-shipped to England and other centres of cotton manufacturing in the United States and Europe.

As the cotton plantation economy expanded throughout the southern region, banks and financial houses in New York supplied the loan capital and/or investment capital to purchase land and slaves.

Recruited as an inexpensive source of labour, enslaved Africans in the US also became important economic and political capital in the American political economy.

Enslaved Africans were legally a form of property — a commodity.

Individually and collectively, they were frequently used as collateral in all kinds of business transactions.

They were also traded for other kinds of goods and services.

The value of the investments slaveholders held in their slaves was often used to secure loans to purchase additional land or slaves.

Slaves were also used to pay off outstanding debts.

When calculating the value of estates, the estimated value of each slave was included.

This became the source of tax revenue for local and state governments.

Politically, the US Constitution incorporated a feature that made enslaved Africans political capital in order to benefit southern states.

“The so-called three-fifths compromise allowed the southern states to count their slaves as three-fifths of a person for purposes of calculating states’ representation in the US Congress,” wrote American author Adam Hochschild in the book Bury the Chains.

“Thus the balance of power between slaveholding and non-slaveholding states turned, in part, on the three-fifths presence of enslaved Africans in the census.

“Slaveholders were taxed on the same three-fifths principle, and no taxes paid on slaves supported the national treasury.”

In 1807, most people agreed that the slave trade was an ethical and religious outrage.

In fact, few people raised their voices against the Atlantic slave trade until the mid-18th Century. There had been isolated objectors, but on the whole, the trade developed without any real sense of religious objection.

It was almost as if the slave trade was morally neutral.

James Walvin, in a paper titled Slavery, the Slave Trade and the Churches wrote: “There had been, it is true, the occasional Christian denunciation of slave trading, most notably from early Puritans and Quakers: George Fox had denounced it as early as 1673. But as the trade grew, involving ever more people and industries to feed the slave ships, and as the material bounty from the slave colonies ﬂowed back to Britain, such criticisms were drowned out by the sound of proﬁtable trade. In the century before abolition in 1807, the British shipped more than three million Africans to the plantations.

The suffering of the Africans on the ships and plantations were undeniable, but raised barely a whimper.

Indeed godly men came to think of the trade as a simple fact of life.”

The Anglican and Roman Catholic Churches were directly involved in slavery.

Among the reasons these churches did not speak against slavery was that they argued slavery removed people from a culture that ‘worshipped the devil, practiced witchcraft and sorcery’ and other evils.

“Slavery brings heathens to a Christian land where they can hear the gospel. Christian masters provide religious instruction for their slaves,” he wrote.

“Under slavery, people are treated with kindness and it is in slaveholders’ own interest to treat their slaves well. Slaves are treated more benevolently than are workers in oppressive northern factories.”

It was only after years of African suffering that sections, like the Church, started ‘questioning’ slavery.