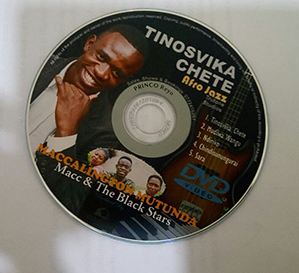 THE most striking thing in the debut video album Tinosvika Chete by Maccalington Mutunda, who fronts Macc and The Black Stars, is the quality, thought and effort that is evident in the work.
Most impressive is that it was produced on a shoe-string budget.
Hearing the musician talk about the difficulties encountered in making the video album, one is left thinking this is your typical video with all songs shot in some park and flowerbeds.
But it is not.
It is a video album that leaves one doubting the artiste faced a lot of difficulties in producing it.
The album carries five videos to the songs, ‘Tinosvika Chete’, which is the title track, ‘Mudiwa Wangu’, ‘Ndiriko’, ‘Chindisunungurai’ and ‘Sara’.
Musicians like Oliver Mtukudzi and Mukudzei Mukombe, aka Jah Prayzah, can best be described as visionary.
They are musicians who have always cared about having incredible visuals to match the superb music.
Naturally, their videos match their experience and stature in the industry.
And it is heartening to note upcoming artistes giving their all to create works of high standard in video production.
Macc, as the crooner is known in Jazz circles, is arguably one of the most active and hardworking artistes who holds so much promise in the genre.
And if groovy jazz, accompanied by honey-laced lyrics and top-notch instrumentation is your thing, then you will find yourself seriously swooning over Tinosvika Chete.
It’s hard to believe this is the group’s first video album, for there is nothing amateurish about this production.
With the advent of technology, music videos have become standard practice for artistes, both big and small.
Technology and aesthetics have progressed through the years, enabling virtually any artiste to produce videos which mostly lack in creativity.
And this is what makes Macc’s video album impressive; it is of high quality, the styling is near perfect, and the plots are convincing.
For instance, ‘Tinosvika Chete’ is a beautiful song with an amazingly put together storyline.
All the videos are unique and in no way monotonous.
With adequate support, Macc and The Black Stars are poised to be the next big thing.
The videos are on point and do justice to the songs.
For example, the song ‘Sara’, which is about the horror of xenophobia, is phenomenal; the concept, execution and direction is exquisite.
The video is gripping and reveals beyond any shadow of doubt the evils of xenophobia.
The ‘Sara’ video delivers a cinematic experience.
The song ‘Sara’ and ‘Chindisunungurai’ are a perfect example of where music video meets short film.
The album was produced by veteran producer Jabulani Ndlovu while the videos were shot with the help of Littlelight Productions.
Littlelight proves it is a force to reckon with by this tight production that delivers visual experiences worthy awards the industry has to offer. All the videos convey the massages in the songs in a catchy way.
The opening for ‘Tinosvika Chete’ is a laid-back groove which falls into place as the visuals vividly bring to life the never-say-die attitude of the artiste.
With not so many youngsters in the jazz arena as most prefer dancehall, The Black Stars will definitely enrich the collection of any serious connoisseur.
The video album is perfect for every individual determined to make it and is not about to give up in the struggle for survival.
Littlelight Productions did a wonderful job visually interpreting the songs.
Tinosvika Chete is an excellent video album.