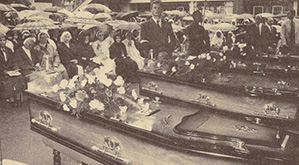 THE following is an account from Sam Dhliwayo as it was narrated to them by Father Dunstan Myerscough, a survivor of the Musami massacre.
Sam was doing Form One at St Paul’s Musami in 1977 when members of the Selous Scouts came to the Mission school and killed only the white staff working there.
“It was on the night of February 7 1977 when a group of men arrived at the mission and rounded up the white staff that totaled eight, ignoring the black staff and sisters.
The seven were Sister (Sr) Joseph Wilkinson (58) from Lancashire, Sr Epiphany Schneider (71), Sr Ceslaus Stiegler (59) both from Bavaria, Sr Magdela Lewandowski (42) from Kiel.
The three males that were part of the group were Father (Fr) Christopher Shepherd Smith (33), a Briton born in East Africa, Fr Martin Thomas (45) from London (the two were Priests of the Society of Jesus, known as Jesuits) and finally Brother John Conway (57) from Trailee, Ireland.
The group was taken a short distance from the mission by the group of eight, which was later suspected to be Selous Scouts, a band of the Smith regime whose tactic was to pretend to be guerrillas and once they were given a warm welcome, they would attack.
The eight, after taking the missionaries (Priests, Brothers and Sisters in the Roman Catholic Church) then argued who among themselves would do the shooting until suddenly, one of them turned on the targets and started the shooting.
According to Father Myerscough: “The shooting came as a surprise because we didn’t know they were going to shoot until the firing started.
“I was lucky to survive by throwing myself to the ground when all this started and once it stopped I looked up and saw that the other seven were dead and there was nothing I could do.”
As the shots were fired, the rest of the group ran away. The cause of the argument before shooting was said to be that others were saying they should not kill while the others were saying they should kill so as to tarnish the image of ‘vanamukoma’ as the guerillas were affectionately known in the operational areas.
It is believed that the Selous Scouts came on horseback from Musana, where they were based and left their horses behind Beta Mountain, which is a short distance from the school.
Former MDC treasurer-general, Roy Bennett popularly known as ‘Muzezuru’ was the commanding officer of the Rhodesian Forces operating in Musana.
They approached the mission on foot, covering themselves with blankets so as to conceal their weaponry.
Helping out the comrades was later established as the reason why the missionaries were killed and, “it was true because one of them, Brother Adamson (late) would travel with the comrades at night and students would go to listen to Radio Mozambique (which was broadcasting what was happening in the war front across the country) at the priests’ quarters.
“It was also no secret that the priests and the nuns provided huge bales of clothing and foodstuff to the comrades,” Father Myerscough said.
“After the killing, The Rhodesian Herald ran a story headlined ‘Mugabe’s terrorists massacre missionaries’, yet it was a tactic that Smith used to turn the ‘povo’ against the comrades since the missionaries had earned their respect and backing through the good work they did, supporting them in the struggle.”
It becomes the reason why Smith and his men did what they did as they knew that their efforts to win the war were fruitless if the missionaries continued supporting the ‘natives’ as well as the comrades.
It can also be noted that the Selous Scouts (originally Zimbabweans who had forsaken fellow countrymen in support of Smith) were being used to counter efforts the country’s brave sons and daughters were making so as to claim what was rightfully theirs.
The Smith regime can be taken to be enemies of progress as they also countered the efforts being made by missionaries, usually their fellow countrymen as they came together with different motives upon colonising the country (it is well known that some came for wealth, others just to find peace while others came to ‘spread the word’ among Africans.
The ultimate result of the attack at St Paul’s Musami Mission was the death of seven priests and nuns from different countries in Europe.
The seven were killed in a semi-circle formation and a memorial has been erected at the actual site of the killing, symbolising the formation they were in as they were shot.
Every year on February 7, a memorial vigil is held in commemoration of the event which has a significant meaning in the mission’s history due to the fact that foreigners were killed in the cross fire in the war to free the country.