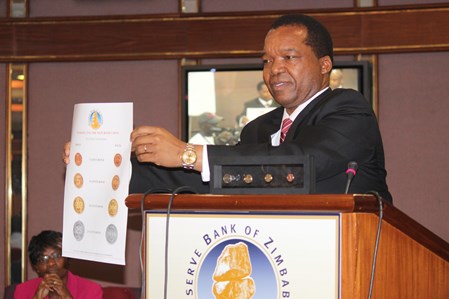 THE Consumer Council of Zimbabwe (CCZ) has said the introduction of bond coins by the Reserve Bank of Zimbabwe (RBZ) will help ease change shortages and reduce prices of goods on the market.
The coins were unveiled last Friday by RBZ Governor Dr John Mangudya.
Before the unveiling the country used the United States dollar and South African rand coins for transactions, but businesses usually rounded-off prices and gave consumers vouchers or sweets as change because of shortage of coins.
This is the first time that the country has launched bond coins since the introduction of the multicurrency system in the economy in 2009.
The coins are expected to buttress the multiple currency system through the provision of change especially for the US dollar notes which have the smallest denomination in circulation of $1.
In an interview with The Patriot, CCZ executive director Rosemary Siyachitema said the coins will help consumers to transact fairly on the market.
She said most consumers were being short-changed by retailers as they were forced to buy goods they had not budgeted for, just to cover up for their change.
“Since 2009 consumers were receiving raw deals on the market due to limited availability of coins,” she said.
“It had become the norm that whether one wants or not, they had to be given sweets as change.”
The RBZ said the country will receive US$10 million worth of bond coins between December and March which translates to two percent of total banking deposits.
The bond coins will be issued in 1c, 5c, 10c, 25c and 50c.
However, the 50c coins shall be released into the market in March 2015 due to the prerequisite security features needed in the design and manufacture of this coin.
The new Zimbabwe coins that were unveiled by the central bank last week will start circulating on December 18.
The bond coins shall be distributed to the public through normal banking channels.
Siyachitema said the introduction of coins would curb unscrupulous business activities on the market that were caused by shortage of coins.
“Now that the coins are coming and will flood the market, it is difficult for retailers to force consumers to buy sweets to cover up for their change,” she said.
“Retailers had also developed a tendency of rounding off their prices to avoid change problems, a situation that left many consumers vulnerable to overpricing.
“The market is now flexible in terms of availability of change and lower price adjustments.”
The CCZ said there was need for the central bank to educate people on how the coins would work so that they do not face resistance or create confusion on the market.
Siyachitema said her organisation would assist the RBZ in conducting awareness campaigns about the coins.
“This is new money on the market and there is need for a huge educational campaign to enlighten members of the public on how these coins work,” she said.
“As CCZ we will also work with RBZ during our consumer education programmes to spread the message about the coins.”
In most economies, the proportion of coins to money in circulation is normally between 20-25 percent.
However, due to the fact that Zimbabwe is using multiple currencies, RBZ said it has envisaged the bond coins to remain below 10 percent of total bank deposits.
Dr Mangudya said the bond coins would be used together with US dollars, Rand, Euros and other currencies and their circulation will be limited to Zimbabwe.
He said the bond coins would address the divisibility and value of money that was undermined in the country.
“Our expectations are that the introduction of bond coins will necessitate correct pricing for goods and services which hitherto was constrained by the absence of an appropriate system of coins,” Dr Mangudya said.
The bond coins derive their name from the US$50 million bond coin facility that the RBZ arranged for the purpose of providing the coins with intrinsic value.
Zimbabwe is not the only country to use bond coins.
Ecuador that also uses the US dollar has special coins, ‘centavos’, which have the same denomination and value as US coins.