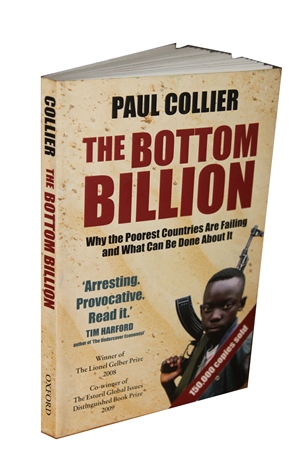 The Bottom Billion: Why the Poorest Countries are failing and what can Be Done About it by Paul Collier
Published by Oxford University Press, Inc
ISBN: 987-0-19-531145-7

DESCRIBED by Max Hastings (Sunday Times Review) as an extraordinarily important book that should be read by everyone who cares about Africa, the book The Bottom Billion’s overarching message which is, however, false is that the continent cannot develop without help of the West.
It seeks to interrogate the challenges faced by the ‘bottom billion’ countries and offer solutions on the way forward.
The book was written by Paul Collier, an Economics Professor at Oxford University, who is also the author of the book Wars, Guns and Votes with the message that Africa needs outside assistance to develop.
Countries which constitute the ‘bottom billion’ according to the writer are the so-called Third World countries that are still developing.
Collier suggests that Western countries should intervene in the bottom billion countries to guarantee and secure development and help them out of poverty.
Examples of countries like Zimbabwe, Uganda, Sudan, Nigeria and Indonesia are cited.
It is such literature by authors like Collier that buttress the notion that the West considers that it has the moral mandate of rescuing Africa, among other continents, from the wretched pit of ignorance and other ills.
This has, however, been proved wrong by a number of African countries that now realise they can do it on their own.
Collier consistently attempts to persuade the reader that the Western world should be highly preoccupied with the issue of aiding Africa out of its ‘misery.’
“Aid tends to speed up the growth process,” writes Collier.
“A reasonable estimate is that over the last 30 years it has added around one percentage point to the annual growth rate of the bottom billion.
“Can we change the way aid is provided, to make it more effective and increase the scope for aid absorption?”
It is people like Collier that would want to fool the world that Africa benefits more from aid yet on the ground it is the West that stands to benefit.
Aid to Africa is not charity instead it has strings attached, helping the West to continue milking Africa of its resources.
Africa has resources which the West needs to sustain the levels of industrialisation in their countries and they have devised methods to get those resources.
Through loans and aid the West then coerces African governments to give them mining claims, oil, land among other natural resources which they do not have.
Instead of advocating for aid, Collier should suggest for the West to create industries in Africa if they are truly concerned about helping Africa.
Aid has created a dependency syndrome as no development is realised in Africa from aid and this has disastrous effects.
In Malawi in 2012 aid was cut when the former President the late Professor Ngwazi Bingu waMutharika chased the British ambassador from Malawi for interfering in the affairs of the country after he had labelled him a ‘tyrant’ in a leaked diplomatic cable.
This led to shortages of basic commodities resulting in protests as people in the country were not used to working for themselves but getting assistance always.
In Zimbabwe non-governmental organisations have meddled in politics as they have used aid as a vehicle to drive the Western regime change agenda.
According to Collier, the ‘bottom billion’ have been victims of what he calls ‘traps’ that have made them continue to wallow in poverty.
The traps include conflict, natural disasters, landlocked with bad neighbours (mainly applicable to Africa), and bad governance.
Collier, however, fails to acknowledge the role of the West, which he suggests to be the saviours of Africa, in the conflict and civil wars in African countries.
As mentioned earlier the West has devised strategies to loot resources from Africa.
The West is funding rebel groups in African countries to disrupt the peace and create an opportunity for them to come in under the guise of helping and in the process looting resources.
In the Democratic Republic of Congo, one of the richest African countries in terms of natural resources, rebels are being funded by the West to continue disrupting peace and slowing development.
Other countries where the Western hand has been fingered in civil wars include Rwanda, Angola and Mozambique.
Commenting on the Zimbabwean situation, Collier blames President Robert Mugabe for the economic challenges.
“…..President Robert Mugabe must take responsibility for the economic collapse in Zimbabwe since 1998 culminating in inflation of over 1 000 percent a year,” he writes.
Collier intentionally forgets to mention the illegal sanctions imposed against Zimbabwe that played a greater part in the collapse of the Zimbabwean economy.
The writer, like his Western fellows, is opposed to leaders such as President Mugabe that have put in place programmes that cut dependency on aid, but promotes increased local production and the empowerment of people.
Leaders such as the late Libya’s Muammar Gadaffi who have advocated the empowerment of Africans and nationalisation of resources have suffered at the hands of the West.
It is high time that people like Collier understand that Africa can now see through the machinations of the West, Zimbabwe in particular.