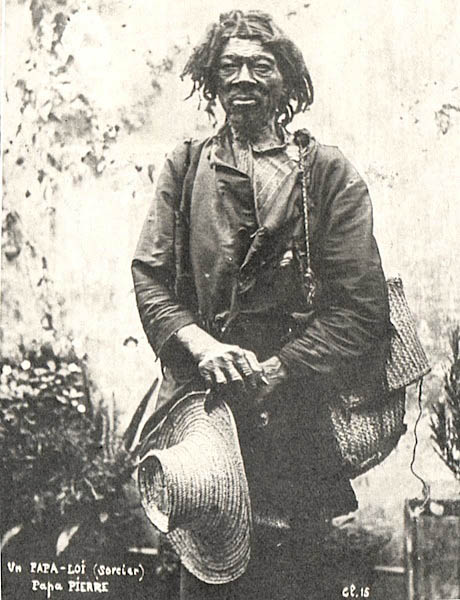 THE execution of Ooger encouraged the blacks to carry on from where the mulattos had left.

The night was hot and sultry, the air filled with the sound of approaching thunder, and the tension was not lessened when Dutty Boukman, black hero whose revolutionary efforts are being looked at here, stood up and demanded that in future not only must the negroes be well paid for their work but they must be given three full days’ rest each week.

According to oral tradition in Haiti, the slave revolt of August 14 1791 was organised at a voodoo ceremony held at Bois Caiman and led by this literate voodoo priest, Boukman.

Haitians believe he sacrificed a pig as part of the blood pact to bring unity between diverse African and creole slaves.

He is said to have declared at this ceremony that: “God who has created the shining sun above … is watching us and sees the misdeeds of the whites! The God of the whites’ demands crime … Our God who is so good orders us to take vengeance!”

Just a week after that pivotal meeting and the Bois Caiman (voodoo) ceremony, the Haitian Revolution began on August 22 1791 in the Haitian mountains in the north.

This rebellion is said by many to be the catalyst to the slave uprising that marked the beginning of the Haitian Revolution.

Haiti is a French-speaking island while Santo Domingo is Spanish and was ‘discovered’ by Christopher Columbus in December 1496.

Columbus rhapsodised this high and mountainous country as the land of God and insisted that he wanted to live and be buried there.

He was enchanted by the many natural harbours, the cultivated valleys, the splendid tropical woods and also by its amiable people.

During the 17th Century, Santo Domingo security was threatened by French and English buccaneers who settled on the neighbouring island of Tortuga and eventually invaded the lightly colonised western part of the main island where they set up their own communities.

This effective occupation was regularised by the Treaty of Ryswick in 1697 when Spain ceded the western third of the coveted island to the French who called their new colony Saint Domingue.

According to Bishop Las Casas: “…at my first arrival in Hispaniola (Haiti), it contained a million of inhabitants. Twenty years later, there remains scarce the hundredth part of them, thousands have perished through want, fatigue, merciless punishment, cruelty and barbarity.”

Conditions did not improve. By 1535, only 500 of the original Indians remained alive on the island.

Clearly, another source of labour had to be found if the gold mines were to be exploited.

Negroes were imported to the island in such numbers that towards the end of the 18th Century, two million black slaves were working there.

By the second half of the 18th Century, the French colony of Saint Domingue was by far the most prosperous in the Caribbean.

Its population, by 1798, consisted of 40 000whites (known on the island as blancs), nearly 30 000 of their mulatto descendants (a class called Affranchis or gens de couleur which had no equivalent in the British West Indies) and nearly a million negro slaves. The ratio of black to white was 16:1.

The island was, and remains, one of those places which drive people to the extremes of lassitude and debauchery. Terrible tales were told in Saint Domingue of the planters’ cruelty to their slaves.

One punishment, for instance, which they were said to favour was the ‘stuffing of a miscreant’s rectum with gunpowder and then exploding it’; reports were heard of a slave having his ear nailed to a pillory and being made to eat it in the evening after being cut free.

In this French colony, which combined such wild extremes of poverty and wealth , of barbarity and gaiety of power and helplessness, a revolt took place with the force of a thunderbolt.

Boukman is said to have led other enslaved Africans in a bloody revolt against the French.

Boukman became a pivotal voice in the soon-to-come Haitian Revolution.

What followed was the thing which every white man in the West Indies had dreaded all his life — thousands of Negroes rising.

But this outbreak was even more fearful than the most pessimistic among the blancs (whites) had ever imagined.

It was a rebellion in which enslaved Africans attacked plantation buildings with hooks, machetes and torches.

They set fire to everything connected with their hated work on the sugar plantations.

The French planters, one of them sighed afterwards, were subjected to a combination of horrors and beheld the worst cruelties in the annals of mankind’s history.

“They seized Mr Bleu, ran a police report and, having nailed him alive to one of the gates of his plantation, chopped off his limbs one by one with an axe.

“A poor Robert,” according to another account, “a carpenter by trade, endeavouring to conceal himself from the notice of the rebels, was discovered in hiding-place and the savages declared that he should die in the way of his occupation. Accordingly, they bound him between two boards and deliberately sawed him asunder.’’

Two thousand blancs perished during the course of this dark night, 1 000 plantations were destroyed, 1 200 white refugees went crowding into Cap Francois, which had been warned of the outbreak not by the tocsin bell but “…a rain of fire composed of burning cane-straw, which whirled thickly before the blast like flaks of snow, and which the wind carried over the houses of the city.”

Boukman was born in Jamaica, but was sold to a plantation in Saint-Domingue (modern-day Haiti) after he was caught teaching enslaved Africans to read.

His name literally meant ‘Dirty Bookman’ a likely reference to a secret book of occult lore he always kept close.

The moniker ‘Bookman/Boukman’ was an indication of how slave owners viewed enslaved blacks, at the time, who knew how to read.

Boukman was quickly captured and beheaded, but the Revolution had started and would lead to Haiti becoming the first independent Republic of Haiti.

Boukman is remembered for his leadership, courage and fearlessness during the slave uprising.