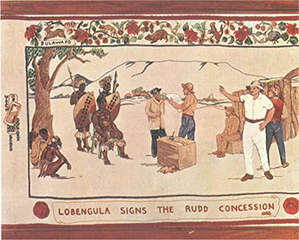 THE most colonial imperialist was non-other than Cecil John Rhodes, who later named this country after his own name.
Armed with dodgy mineral rights and treaties obtained from persuasion or influence, Rhodes used his financial resources which he derived from control of De Beers and Gold Fields of South Africa, to create the British South Africa Company (BSAC).
Under the name of BSAC, Rhodes also used agents to obtain concessions.
There were five major concessions over the period from September 2 1880 to October 6 1888.
These include the following :
But of all the treaties made, the Rudd Concession requires us to look more closely at how Zimbabwe was stolen.
To date, no compensation has been paid for the massive theft and looting of our land and its wealth.
Rudd was a British explorer or hunter who arrived at Lobengula’s court seeking to explore and hunt then prospect for minerals.
Lobengula would not entertain Rudd’s request.
Then came Sir Sydney Shippard, British Commissioner for Bechuanaland, representative of Queen Victoria.
He was accompanied by a missionary, Charles Helm, trusted by Lobengula.
Charles Helm and Sydney Shippard then promised Lobengula that the Rudd Concession would give him better protection from other treaty and concession seekers.
Helm helped translate the agreement to Lobengula including assurances that no more than 10 white men would be allowed to work in his country.
They also agreed that all their firearms would be surrendered on arrival.
Trusting the missionary and the Queen’s representative, at midday on October 30 1888, Lobengula placed his elephant seal as a stamp and signature to the agreement.
But Lobengula soon discovered that he had been cheated of his land and all its minerals.
His efforts to send envoys to England and intercede with Queen Victoria were too late.
Rhodes had therefore tricked Lobengula, and took ‘whatever action’ was necessary to exploit the minerals in Lobengula’s kingdom.
The British government backed the move and granted Rhodes a charter to establish the BSAC.
As noted by one historian, Lobengula had been, “duped into  signing a document that contained few of the assurances promised to him during the negotiations and one which was to lead to the annexation of his country five years later by Cecil John Rhodes and his BSAC.”
Once the colonialists had settled and Lobengula forced to flee his majestic court, the settlers flooded into this country.
Between 1893 and 1923 the BSAC appropriated African land by force from Mashonaland and Matabeleland.
The company then took African cattle forcing Africans to work on the farms that had been pegged out by settlers, demanding tax in cash for hut tax, cattle, dog and even bicycle tax.
Then the company demarcated African land, relegating Africans into reserves or Tribal Trust Lands which were less fertile.
In the north the land was infested with tsetse flies and in most areas people became overcrowded living on poor unproductive soil.
The Morris Carter Commission of 1925 recommended a racist division of land, resulting in the infamous Land Appor­tionment Act of 1933.
Under this act, 96 million acres in the colony were divided this way. At least 10 million acres were demarcated as national land; 40 million was given to Africans.
At least four million acres were designated as ‘native purchase areas’; six million was left open to people of all races while a total of 36 million acres of prime land was exclusively set aside for the few Europeans.
In some areas, Africans were encouraged to stay on European farms as ‘tenants’, offering free labour in return for living on land that was your own. They forced the people to work under a slave like system called Chibharo. Such unjust and exploitative system by the settlers led to the First Chimurenga wars of 1896-1897.
Apart from the thefts of land, Zimbabwe’s art and treasures suffered looting as well.
Amateur archeologists and gold diggers ‘discovered’ Great Zimbabwe monuments and claimed that they were built by Europeans or Phoenicians.
In 1905, British archeologist David Randall-MacIver arrived at Great Zimbabwe and studied the mud dwellings within the stone enclosures.
Randall-MacIver was the first European researcher to say that the dwellings were “unquestionably African in every detail.”
As a result of this bold assertion, Randall – MacIver and other archeologists were banned from the Zimbabwe site by the colonial government.
Meanwhile, the looting continued from whoever arrived to explore and dig for gold and suspected treasures.
Great Zimbabwe remains the largest single prehistoric structure in sub-Saharan Africa related to similar structures at Mapungubwe across the Limpopo on the South African side.
It was one of 300 known stone enclosure sites on the Zimbabwe Plateau and it is the largest ancient stone construction south of the Sahara.
There was a lot of wealth and knowledge in the work of art and architecture at Great Zimbabwe that was destroyed during those early days of colonialism.
Today, the Zimbabwe artefacts are kept in museums, public offices and private collections all over the Western world.
Much of our history as recorded by the creative work of the artefacts was lost and it will not be reconstituted.
From the time before the signing of the Rudd Concession to independence in 1980, the white colonialists were oppressing and exploiting the black people of this country, taking away its wealth, minerals, land, forcing people to work like slaves.
We will never know how many of our people suffered and died under the harsh racist society of Rhodesia.
And yet, we are saying little or nothing at all about compensation for the wrongs done to the people of Zimbabwe under colonial rule.