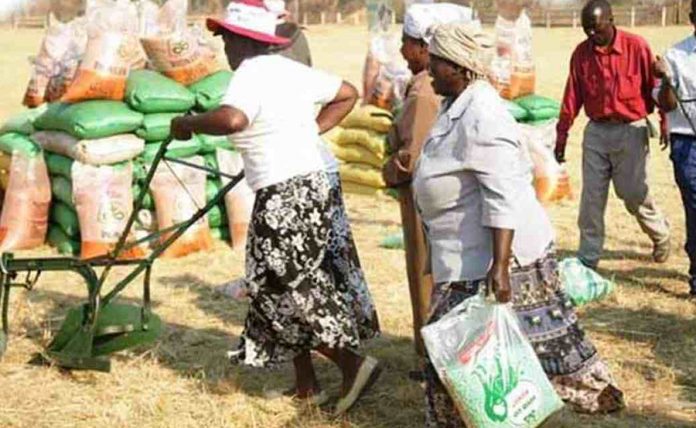 WHILE the Government announced that it will complete distribution of inputs to smallholder farmers under the Presidential Inputs Scheme by end of this month, it is not surprising that we have some Zimbabweans in our midst still stuck in polarisation mode.

This grouping, which is mainly inclined to the opposition’s highly toxic and divisive politics, has remained stuck in a time warp, denigrating the many good things Government has been doing in the hope that their besmirching of the country will bring the opposition into power.

That, as we have said time-and-again, is simply not going to happen.

What we have, instead, is a Government bent on uplifting the livelihoods of the majority as seen by the many developmental projects taking place across the board.

If anything, those divisions are one of the reasons the illegal economic sanctions against the country must be removed urgently.

The sanctions were created not only to paralyse our economy and weaken our institutions, but to establish a deeply divided country which can easily be distabilised as is the case now.

This is what many in the opposition, who ingenuously endorse those sanctions, are failing to embrace.

They are unlikely to grasp that compelling fact unless shown the light, as this publication is doing.

Let us explain the situation as it is.

Because of that rather perverted ideological orientation where sanctions are blighting the bigger picture, which is to build the Zimbabwe we want as a united people driven by a common cause, we now are a nation of various distinct and dissonant groupings.

The sponsors of those sanctions, the West, are without doubt gleefully watching from the sidelines as we senselessly tear each other apart.

As a result of the sanctions, citizens are grudgingly finding themselves being dragged and stuck in those murky waters of senseless divisions by hook or by crook.

Let us put it more appropriately.

Because we have descended into a fragmented nation, each individual has to have an individual political narrative.

You are either a sellout or a patriot, a friend or an enemy, an ally or a foe.

There is no fence or middle ground to the madness.

Which is why those of a progressive disposition have embraced Government’s efficiency in ensuring that there is timely distribution of inputs.

Those farmers are the heroes of our time whose toil is ensuring that a healthy nation is possible in our time.

The Ministry of Lands, Agriculture, Fisheries, Water and Rural Development says the programme will support five plots per household, up from three last season.

The programme will also support 2,3 million households, up from 1,8 million who benefitted last year.

“We are very well prepared this year in terms of Pfumvudza,” Ministry of Lands, Agriculture, Fisheries, Water and Rural Development Vangelis Haritatos told The Sunday Mail this week.

“The rains are going to be normal to above normal this year, so what is really required is planting early.

Under the Presidential Scheme, we have great support, we expect the Pfumvudza plots to start getting ready now, we expect our farmers to have holed and prepared mulching.

In the coming week (this week), the Minister and his deputies will be touring all the provinces to see if the farmers are prepared to receive inputs.

We are embarking on a three-pronged approach, which will consist pre-planting, planting and harvesting inspections.

We have just come from a beautiful season of 2,7 million tonnes (of maize) and we expect to surpass that should the rains be good.

The training of our farmers and AGRITEX officers is ongoing, so we have fulfilled what we needed to do. What needs to be done is distributing the inputs.”

The country achieved a harvest of 2,7 metric tonnes of maize which was a national record.

The new administration has prioritised the revival and development of the agricultural sector as the anchor of the country’s development thrust.

As such, the Presidential Inputs Support Scheme has since been extended to other agricultural sectors, such as livestock production.

A fortnight ago, Government announced the Presidential Rural Poultry and Goat Pass-On Scheme which is expected to benefit five million households across the country.

Under the programme, Government will dish out goats and chickens to rural families with the poultry programme initially starting in Matabeleland North, Matabeleland South, Masvingo and Midlands provinces where 1,8 million households will benefit from this year to 2025.

The four provinces traditionally receive low rains and the initiative is to cushion them from the devastating climatic conditions.

The Goat Pass-On Programme will cover eight provinces across the country, with three million households benefitting from this year to 2025.

Also, Government has started yet another initiative targeting horticulture where 35 000 villages will have a borehole drilled per village.

While those who wish the country ill continue to moan and anticipate its destruction, the reality on the ground is pointing otherwise.

The reality is that progressive Zimbabweans are very much on the ground, building the Zimbabwe they want.