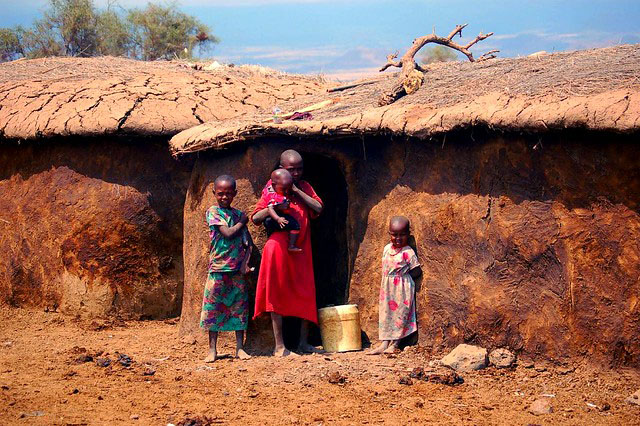 THERE is a strong resemblance, according to a number of scholars, between the ancient pre-historic culture of the Southern Sahara and those of the ancient pastoral cultures in Nubia, especially represented by the C-group population.

One specialist in African archaeology, David Phillipson, has relatively recently stated that the affinities of C-group pottery strongly suggest a Saharan origin.

However, Gabriel Camps, before this, had shown that ancient Saharan industries possesed close affinity with the neolithic industries of Nilotic area.

The rock art of the Tassili region of Algeria and also in Ennedi of Chad and the Tibesti region, a pastoral period between the 4th and 3rd milleniums BC, depicted cattle with horns deformed and with curious pendants typical of those of the Nubian, especially C-group area and further east.

Fine sculptured cattle and other anthropomorphic cult figurines appear at the sites as they do east of the Nile. The men are often represented, according to Camps, as men resembling the Fulani, slim with dark complexions and small pointed beards rather like those portrayed  in rock art of the Arabian  desert spoken of by Anati. Ancient stone tumulus graves in the western  part of  the Southern Sahara are reminiscent of those built by C-group.

The territory of the Tamehou or Tjemehu has been suggested to have corresponded to the general area of of the C-group populations who occupied the Libyan desert of Sudan and parts of Nubia.  Both A. Arkell and Bates had come to conclude that the C-group Nubians represented a Libyan people.

A. Arkell and Bates also felt the people of this culture (C-group) were the Libyans whom the Egyptians called Tjemehu, who are mentioned as early as a 6th Dynasty inscription in a land to the south of Egypt.C-Group pottery has been found in the Gilf Kebir in Libya and the Wadi Howar to the west of Nubia in the Libyan desert. C-group people were also affiliated with the kingdom of Kerma in Nubia.

The C-group material ‘affords several representations of the human figure’. Some are wearing cross-bands which were ‘so frequent’ in Egyptian portrayals of the Libyans. Bates also found correlations between the designs on C-group pottery and ancient Libyan tattoo-marks (both of which he illustrates in his book, The Eastern Libyans).

He also notes that one of the female figures represented on the pottery was a woman wearing a kirtle like the Libyan women are shown wearing in the ancient Egyptian portrayals.

In addition, the fact that there was a cow cultus in the C-group complex which was ‘paralleled’ by the Libyans; the similarities in ‘material culture’; and the fact that the C-group cemeteries were in a district geographically connected with the Egyptian oases are factors which he finds to be evidence of the Libyan connection of these remains.

C-Group populations skeletally, according to Bates, bore an indubitable resemblance to those of ancient Egypt, but became increasingly mixed with other African populations.

The pottery of the later Meroitic period retained resemblances with that of the C-group.

Other modern specialists have come to associate the spread of C-group with the early radiation of Nilo-Saharan speaking peoples. The huts of Nilo-Saharan speaking tribes living in modern Ethiopia resemble those pictured on a Meroitic vase at Karanog. The Nilotic peoples create small cattle cult figurines and deform the horns of their cattle as do the Cushites.

It is likely that the Nilo-Saharans, like the Teda and Zaghawa groups and Masai, who physically have been described as ‘half-hamites’, and whose pastoral culture shows many resemblances to modern day Cushitic or ancient Trogodytes of the Red Sea nations emerged from a confluence of distinguishable African physical types in the Nubian area, and moved at different times westward and then south and eastward carrying religious and ontological notions, customs and varying degrees of technology of the Kerma and Meroitic kingdoms with them.

Archaeological evidence for the Nubian affiliation of the Berbers

Just as other nomadic peoples like Nilo-Saharans anciently, and, more recently, the Fulani, have extended themselves across the Sudan from Senegal to East Africa; it seems ancient Nubian nomads originating east of the Nile ancestral to modern Beja and Afar, had from an early period spread themselves over the North African area between the Atlantic and Red sea, retaining their names.

To them may have been due the horse chariot and later the camel and veil in North Africa.

As Oric Bates, writer of The Eastern Libyans, pointed out, the stone tumulus graves of Nubia typical of C-group and Pan-Grave culture closely resemble the type found in the Western Sahara called by the Tuareg regem or argem. The tombs, regularly measuring 8 to 10 metres in diameter, contained burials in which the bodies are found in a contracted position. Offering niches were outside the  super-structure of the tombs  in both the Nubian and Saharan tombs.

Henri Lhote had noted that these graves found in the location of Air, Ain Sefrah, Oranais, Cyrenaica in the Adrar n’Iforas and in the Azgar Tassili in Algeria recall the present-day geographical situation of the Tuareg.

These tombs are considered rather late in date, later than the pastoralist phase mentioned previously in date, but pre-Islamic.

These tombs were also studied by Camps and described by him as being made of stones of diverse dimensions, circumscribed at the base by a range of larger stones fixed in the earth.

They are the most frequent of burial monuments in North Africa, extending from above the Atlas throughout Sahara to the Niger and from the Nile to the Canary Isles.

They appear in Rio d’Oro, Fezzan, Cyrenaica and Abyssinia. He calls them a type as ancient as the Memphite period in Egypt. The body was found normally in the customary retracted position.

Camps said this type of tomb, with niches or chapels, was built by the ‘Equidian’ or chariot-using Berbers, whom he describes as worriors armed with javelin and arm-dagger, plumed with ostrich feather, and at times associated with crescent shaped monuments.

In fact such men appearing in the rock drawings near the tombs wearing single feather and tunics are curiously reminiscent of the Cushitic-speaking Beja and Danakil (Afar) who wear a single black feather in their hair and (carry) arm-daggers or wrist knives.

An early French Mission to the Central Sahara found ancient pottery there formed on basket-work matrix which showed close similarity to pottery made on baskets in use among the Somali and Danakil rather than on baskets now used in the Sahara.