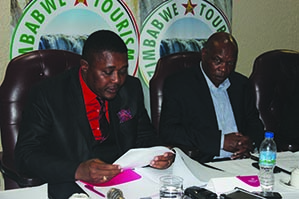 THE recent ‘honour’ bestowed on Zimbabwe for the World Best Tourist Destination For 2014 and Favourite Cultural Destination for 2014 by the European Union (EU) left a lot of questions on the motives of the regional bloc.
It is the same EU that was responsible for the collapse of the tourism sector in the country through illegal economic sanctions, before tarnishing the country’s image through Western media such as BBC, rendering Zimbabwe an unsafe tourist destination.
This anti-Zimbabwe onslaught was part of the EU’s project of isolating the country.
The sudden U-turn by the EU raises a lot of questions on the sincerity of the bloc, given its history on Zimbabwe which is a messy one.
It is the first time that the award for World Best Tourist and Favourate Cultural Destination has been given to an African country.
Can the EU be trusted on this?
What has changed now?
The last question presents a platform for Zimbabweans to be wary of the motives of the EU in its much publicised honour of the country.
This is so because President Robert Mugabe and ZANU PF whose resentment the EU has made no secret about are still in power.
It was because of President Mugabe’s policies that the EU disengaged from the country after being accosted by Britain.
To the EU, President Mugabe is the stumbling block to ‘democracy’.
Given that the EU in the past issued travel warnings to its citizens discouraging them from visiting Zimbabwe, it is ironic that the same is being reversed with the country being accepted as a safe destination.
The key issue here is that the EU is using the honour as part of its sly re-engagement efforts.
But as history has shown, the EU has never been sincere.
The travel warnings meant that EU citizens could only travel to Zimbabwe at their own risk and these reduced tourist arrivals from traditional source markets in Europe to 13 percent from between 30 and 31 percent.
All these claims were not true, but a political gimmick by the EU to give bite to illegal sanctions that it imposed against Zimbabwe in a bid to make the economy ‘scream’ and enforce regime change.
However, the honour comes at a time when the Chatham House has called for re-engagement with Zimbabwe in a move that could be viewed as its most critical stage of enforcing regime change in the country.
Is the EU’s praise for Zimbabwe’s tourist destinations not part of the strategies of the British think tank to try and use the hospitality sector as one of its entry points to infiltrate the government’s systems as tourism has a proven record of uniting and engaging people easily?
In a letter that was written by the president of the European Council on Tourism and Trade, Proffessor Anton Caragea last week, the bloc said Zimbabwe was internationally competitive in its tourist destinations that deserved the award.
“In our opinion, your beautiful country has made great strides in developing fair, socially oriented, environmentally friendly tourism and in improving security and safety conditions for tourists,” he said.
This revelation by the EU was made despite the fact that nothing has changed in Zimbabwe in terms of its political, social and economic environment that was once condemned by the bloc during the past decade.
The main worry is what has made the bloc to have a different view within the same country’s environment they were discrediting in the past?
Professor Caragea also went on to ‘unusually’ praise President Mugabe who in the past has been labelled a dictator by the EU.
He said President Mugabe is an exceptional leader who has demonstrated excellent leadership in his governance across the African continent.
“We therefore acknowledge with joy, honourable Minister’s acceptance of the Award for World’s Best Tourist Destination for 2014 and preparedness to sponsor a delegation of five European personalities from the European Council on Tourism and Trade to come to the Republic of Zimbabwe to publicly present the award and express our confidence in the Republic of Zimbabwe’s tourism and to His Excellency, President Robert Mugabe for his outstanding leadership and interest in promoting tourism as a tool for economic development and the preservation of cultural identities.”
These are shocking utterances from the EU on legitimising and endorsing the Government of President Mugabe.
Is it not the EU that discredited the July 31 election that saw ZANU PF claiming a resounding victory through people’s votes as null and void?
Is it not the same bloc that was funding the defeated MDC in these elections which they joined hands to influence the world that President Mugabe’s rule was illegitimate?
Yet today the same EU is giving President Mugabe’s rule an international recognition.
What is their interest?
Maybe they have decided to face reality and accept defeat for their attempt to enforce regime change in Zimbabwe?
However, the same President they are giving a lot of praise is the very person whose wife, Amai Grace Mugabe they denied a visa to travel to Belgium for the EU-Africa Summit last month.
In this regard, it should always be noted that the EU has permanent interests not friends and the bloc’s efforts of enforcing regime change in the country will never end until their dream has been fulfilled.