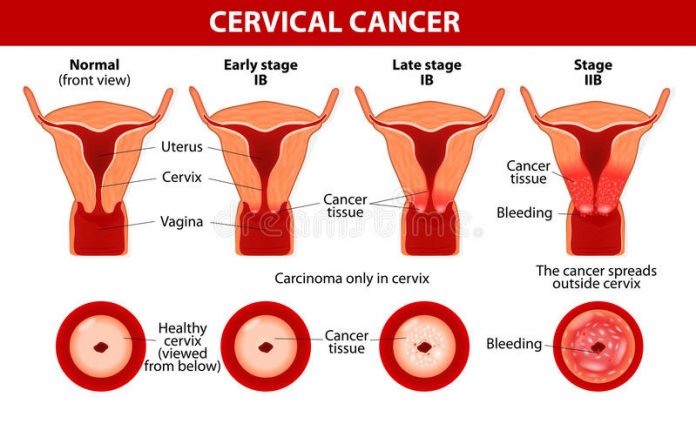 HIV/AIDS-RELATED cancers, namely Kaposi’s sarcoma, invasive cervical cancer, non-Hodgkin’s lymphoma and squamous cell carcinoma of the conjunctiva, continue to rise.
A 2015 report by the Zimbabwe National Cancer Registry revealed that three of the HIV related cancers make up 33 percent of all the cancer cases, with cervical cancer cases being 19 percent.
“Kaposi’s sarcoma and non-Hodgkin lymphoma were seven and six percent of the total cancer cases respectively while the squamous cell carcinoma of the conjunctiva are part of the other cancers that make up 34 percent of cancer cases,” reads the report.
However, in general, AIDS-related cancers remain a public health concern with cervical cancer increasing on a yearly basis from 2005-2015 which has been most likely attributed to longer survival of HIV positive clients who are on anti-retroviral treatment (ART).
According to the American Cancer Society, cervical cancer is a cancer of the cervix, the lower part of the uterus (womb).
Like Kaposi’s sarcoma, cervical cancer is strongly linked to infection by a virus.
In this case, the virus is the human papilloma virus (HPV).
HPV can be spread from person-to-person through skin-to-skin contact, including through sex.
HIV-infected women are at high risk for getting cervical intraepithelial neoplasia (CIN).
CIN is the growth of abnormal, pre-cancerous cells in the cervix.
Over time, CIN can progress to invasive cervical cancer, in which the cancer cells grow into deeper layers of the cervix.
CIN must be treated to keep it from invading.
This is done by removing or destroying the outer layers of cervical cells.
Untreated CIN is more likely to progress to invasive cervical cancer in HIV-infected women than in women who do not have HIV.
The standard treatments for CIN do not work as well in HIV-infected women as they do in women without HIV.
The chance of the disease coming back after treatment is high, especially in women with very low CD4 (helper-T cell) counts.
HIV-infected women with invasive cervical cancer and good immune function tend to do well with surgery and the same treatments that women without HIV get.
It is against this background, that the Ministry of Health and Child Care (MoHCC) has recognised the link between treatable HIV disease and increased morbidity and mortality from non-communicable diseases (NCDs) and has joined other partners to fight this scourge.
The supply of ARVs has led to the recovering of many patients, thus reducing the incidence of HIV-related cancers.
The Ministry has also embarked on an expansion drive for cervical cancer screening among HIV positive women at most opportunistic clinics with support from its strategic partners.
Anti-cancer drugs such as Bleomycin, Methotrexate, Cisplatin and Doxorubin have been distributed.
Some other, less common types of cancer may also develop in people with HIV.
The link between HIV and these cancers is still not fully understood.
Some of these cancers have been linked to infections with different viruses.
These viruses can cause cancer in people with or without HIV, but the risk might be higher in people with HIV because their immune systems are less able to control the viral growth.
The incidences of cancers affecting HIV+ people have however, gone down with the introduction of anti retroviral therapy (ART).
Anal cancer and some mouth and throat cancers are linked to infection by HPV, the same virus that causes cervical cancer.
Liver cancer is known to be more common in people infected with the hepatitis B or C viruses.
Some types of lymphoma have been linked to viral infections as well.
For some cancers, the higher risk may be because of other factors these people are more likely to have, rather than the HIV infection itself.
Mouth, throat and lung cancers are strongly linked to smoking.
Cancers of the liver, mouth and throat (as well as some other cancers) are linked to heavy alcohol use.
However, as people with HIV are now living longer, they are also developing other cancers that are not clearly linked to HIV but more common in older people, such as breast, colorectal and prostate.
Everyone be they HIV+ or HIV- need to get screened for cancer. Screening for cervical cancer requires testing of all women in child-bearing age to detect pre-cancerous changes which at most times do not show any symptoms.
Screening is only effective if there is follow-up and treatment if one is found to have cancer.
Cervical cancer is now among the notable killers in women. This death can be avoided if one is regularly screened for cancer.
Several tests can be used to screen for cancer. The pap smear (cytology) is widely used in large populations.
Another method used is the visual inspection with acetic acid and camera, (VIAAC).
It involves examining the opening of the womb, or the cervix, for changes that might lead to cancer. If these changes are detected early, the cells can be eliminated before they become cancerous.
Women above 30 years are at most risk of getting cervical cancer and this age-group is still child bearing at most times.