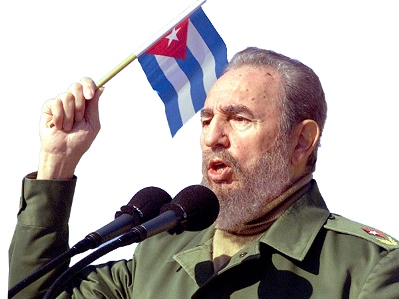 “We are a mixed race from Africa and Spain. No one should consider themselves a pure race, much less a superior race.” – Fidel Castro addressing a revolutionary rally in Havana in 1959

AFRICANS were brought to Cuba at the start of the Spanish conquest and colonisation of the Americas around 1511-1514.
Among the mix of Spanish, Chinese and the indigenous population, the enslaved black people comprised nearly one-third of the Cuban population.
Cuba’s economy was dependent on African slave labour on the sugarcane and coffee crops.
Most of the slaves were brought to Cuba between the 1780s and the 1860s, as the slave population rose from 39 000 to 400 000.
Overall, it is estimated that over 600 000 Africans were taken from West Africa and shipped to Cuba during that long period of slavery.
Tens of thousands of slaves died during this brutal Atlantic Crossing.
Despite the fact that slave trade to Cuba was illegal after 1794, US traders frequently made slave voyages to Havana and profited from the Cuban plantations. Cuba was one of the last Latin American countries to abolish slavery.
This was done by means of a royal decree that was issued by the Spanish king in 1886.
Racism has a long history in Cuba.
It commenced when Spanish settlers arrived with African slaves.
Although other races and immigrant groups arrived in Cuba, the differences between blacks and whites raised the question of equality and justice.
Racial segregation became more marked in Cuba in 1898 when the segregated armed forces of the United States arrived there.
It should also be noted that during the meeting of cultures in Cuba, there was a decimation of indigenous populations as more and more Africans mixed with the Europeans.
From that time until the Cuban revolution under Fidel Castro, black people experienced systematic racism.
There was an intensive fight against racism among the peasants and workers to the extent that trade unions in Cuba after 1902 included many black members.
The activism of black people led Fulgencio Batista, a mulatto of Afro Cuban educated elite, become a sergeant who led a coup against the commissioned officers in the Cuban army in 1933.
This made him the head of the military.
In 1940, Batista was elected president and he held office until 1944, when the candidate he supported lost the election.
Despite his race, Batista was not supportive in fighting racism.
Then came the revolution led by Maceo, Céspedes and Martí.
They led the antiracist tradition and overthrew Batista.
The Cuban Communist Party and the Revolutionary Directorate included all races on the day they entered Havana.
The revolution challenged the harsh dictatorship, unjust hierarchical structures, and racial practices that had kept the authoritarian rule in place.
In 1959 Batista was forced into exile by Fidel Castro’s revolution.
Upon winning the Cuban Revolution, Fidel Castro acknowledged that racism was rife in Cuba.
The Afro‑Cuban population was disproportionately poor and marginalised, lacking sufficient medical care, social services and educational opportunities.
Two months after victory, Fidel himself addressed a rally in Havana saying:
“It should not be necessary to dictate a law against an absurd prejudice.
“That which should be dictated is the public condemnation against any people so filled with old vices and prejudices that they would discriminate against Cubans over questions of lighter or darker skin… We are going to put an end to this odious and repugnant system…”
Castro launched major reforms to eliminate racial inequality in public spaces, education and employment.
He said racial injustice was a counter revolutionary crime because it had the potential to divide the nation.
He outlawed all forms of legal and overt discrimination, including discrimination in employment and education.
In 1975, Fidel Castro said, “With the US domination of Cuba, race discrimination, which should have been wiped out forever by the bloodshed in common on the field of battle… became especially acute.
“In the parks of many cities one could observe the disgraceful sight of blacks and whites segregated in separate areas.
“Many educational, economic, cultural and recreational establishments were barred to black citizens, who were denied the right to study, work, and enjoy culture, and what is more important, human dignity.”
Castro also worked to increase the number of Afro-Cuban political representatives. This increased the percentage of Black members on the Council of State from 12,9 percent in 1976 to 25,8 percent by 2003.
However, Afro-Cuban representation decreased as the institutions became more powerful.
Today, Cuba’s population includes whites, mestizos and Afro‑Cubans (blacks and mulattos).
The percentage of Afro-Cubans varies between 62 percent and 33 percent.
Within the melting pot of races, the Afro Cuban forms part of the Cuban culture. The term ‘afrocubano’ was created by the writer Fernando Ortiz.
He used this term referring to the predominance of African elements in various aspects of Cuban culture.
Ortiz also noted the idea of ‘transculturation’ which means two or more cultures come together and “elements from each culture are lost, new forms are created, and a cultural product different from the ingredient parts is born.”
Without any doubt, Africa has permeated Cuban culture, in everything.
As Carlos Marques has noted, African influence is seen in the “the rhythms of speech, and the nourishment from dance and music, cuisine, and worship; however, at the same time, elements that are too purely African, or that reveal the legacy of slavery are rejected.”
Although it can be argued that there is less racism in America than in Cuba, this is not to ignore that ‘white’ Cubans still hold social and economic positions of power over the black Cubans.
However, in comparison to the US, black people subjected to racism in the US are likely to experience a fairer system in Cuba.
In Cuba today there is a mixing pot of people who identify themselves as Afro-Cubans, Mulattoes, Cuban-Chinese, Cuban-Muslim, Cubans of European or Indian ancestry.
Among them are black shades of Africanness to highlight historical presence of black Africans in Cuba and how they have survived over time.