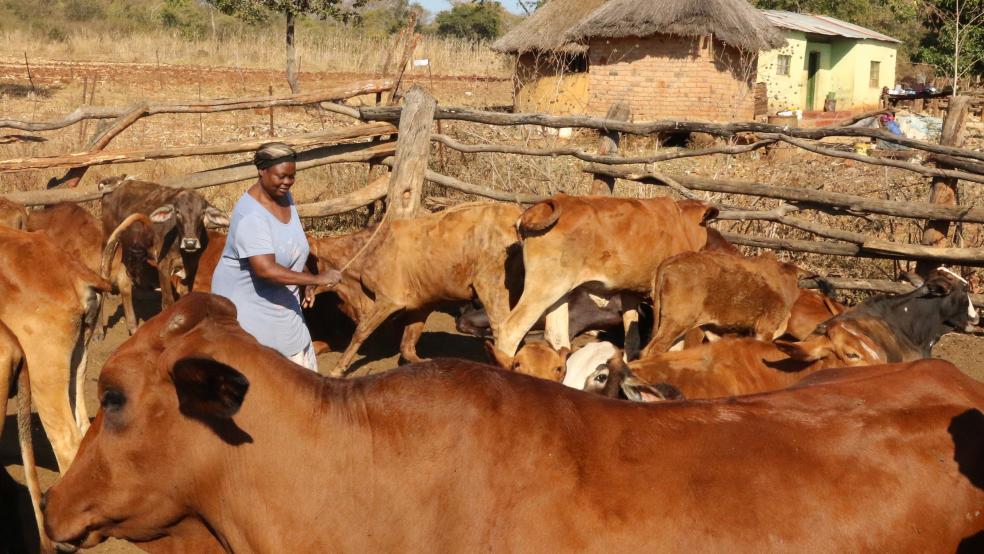 GODFREY HUGGINS, the then Prime Minister of Southern Rhodesia, felt that Africans would prefer an indirect form of stock tax ‘unless ill-intentioned people or agitators stir them up’.

The idea of taxing African peasants to assist the colonial export endeavour found favour among white ranchers and senior Government officials; many of whom were of the prevalent opinion that Africans were ‘largely responsible for the large cattle surplus already flooding the domestic market’.

By virtue of the fact that Africans owned more cattle than white ranchers, and also due to widespread evasion by private butchers, white ranchers and speculators alike, the largest share of the tax burden was borne, not by the real beneficiaries of the industry’s export scheme who were white ranchers, but by the African peasantry.

Calculations based on the 1932 cattle population and national slaughter figures estimated that Africans would have to find £20 353 as compared to £11 927 from white cattle ranchers.

What the Government had failed to raise from African peasants through the tax or slaughter levy, it raised through manipulating quarantine regulations imposed to curb the spread of foot-and-mouth disease.

Just as the maize situation, the imposition of the levy closed the local market for producers who could not produce heavier animals, namely Africans, whose cattle were lighter due to poor grazing conditions in the reserves.

Private butchers either forced Africans to accept lower prices for their cattle or simply resorted to slaughtering heavier animals (which came from European ranches where grazing was better), to minimise the impact of the slaughter levy.

Desperate to persuade South Africa to allow the resumption of Rhodesian cattle exports through that country, the Rhodesian Government chose to commit all its resources to the fast clearance of foot-and-mouth disease from all white farming areas in their effort to ensure the speedy lifting of quarantine regulations from all white farming areas and ensure the immediate resumption of cattle sales.

However, no similar efforts were made to ensure the speedy elimination of the disease in African reserves.

From the outbreak of the foot-and-mouth epidemic in April 1931, the predominantly white-oriented Department of Agriculture and Lands failed completely to show any concern regarding the consequences the rigid veterinary restrictions would have on the African stock-owners or, for that matter, the very low cattle prices they received after the deduction of the slaughter levies.

In February 1932, the Minister of Agriculture justified the variance in treatment of African cattle producers by condescendingly stating: “He (the African) is far better able to tide himself over against a period of lack of markets than is the European farmer.

With an abundance of cattle and milk and with a good season for grain, the native can live in, to what to him is the lap of luxury, quite independent of markets.”

A rancher and parliamentarian also spoke for many in the white ranching community, when he added that: “Africans enjoyed other advantages over the European such as free land, cheap dipping and the low standard of living.”

But, the real objective behind leaving the situation in African reserves unattended to was to facilitate the resumption of white cattle sales both in and outside the country while hundreds of thousands of African-owned cattle were locked away under quarantine.

Interesting was that, after locking hundreds of thousands of African-owned cattle under quarantine, the Government conferred upon Liebigs, which had just opened its meat extract plant at West Nicholson in 1934, the monopoly of buying all cattle from African areas inside the quarantine.

The quarantine regulations became, not simply a mechanism for regulating the flow of cattle on to the domestic market, but also a means through which ultra-cheap cattle were channelled to the new Liebigs factory.

In essence, these restrictions took care of what was perceived to be vast surpluses of African cattle in every subsequent year between 1931 and 1938

It is interesting for the reader to note that while African reserves like Chibi (Chivi) and Bikita were locked under quarantine from 1934 to 1938, the actual outbreak of foot-and-mouth which led to implementation of quarantine measures had actually occurred on the adjoining white-owned ranches of Nuanetsi and Devuli (Devure).

In actual fact, in 1938, the Native Commissioner for Bikita reported that: “There had in fact, never been a case of foot-and-mouth disease in the reserve… throughout the period of quarantine.”

Clearly, the quarantine measures were largely an attempt to check the flow of African-owned cattle onto the domestic market, while white ranchers were given the option of either selling their cattle to RECSCO (not Liebigs), which offered higher prices for all ‘Freezers’ and ‘Chillers’; or alternatively, sell on the open market where prices had started stabilising due to a ban slapped on African cattle.

Either way, under the circumstances, white ranchers got the best deal.

There was nothing to stop white ranchers from buying African-owned cattle from inside.

The promulgation of the Cattle Levy and the Beef and Export Act No. 28 of 1935, which repealed the 1931 Act and scrapped the 1934 3d. tax in favour of the 10s. slaughter levy, automatically meant that the capital burden on the African peasantry began to shift more towards cattle.

In fact, under the 1935 Act, white contribution to the Cattle Levy Account actually increased from £11 927 to

The fall in the capital burden was, by all means, more than compensated for by the exceptionally high degree of exploitation in the marketing sphere by private butchers, white cattle dealers, or by speculators, either acting on their own or as free agents in the employ of Liebigs and its buying agents.

The exploitation began at the point of privately organised sales and sale by private treaty (or so-called out-of-hand sales at the farm).

For every beast sold, the producer or seller received what remained after agent fees and the slaughter levy were deducted from the selling price.

The deduction of the slaughter levy effectively undermined the market for low-grade cattle produced by African peasants.

The Government’s slaughter levies contributed not only to the accumulation of ‘scrubs’ in African reserves, but also to the general decline in the quality of stock in the African cattle sector.

Middlemen, most of whom were speculators or agents of white ranchers or private companies, had many other ways of shifting the burden of the slaughter levy on to the shoulders of the African peasantry.

The African cattle producers had only two choices; selling directly to RECSCO or to Liebigs, or more commonly, selling through agents, usually in return for a higher price at the factory or a lesser price at the farm.

Dr Tony Monda holds a PhD in Art Theory and Philosophy and a DBA (Doctorate in Business Administration) and post-colonial heritage studies. He is a writer, lecturer, musician, art critic, practising artist and corporate image consultant. He is also a specialist post-colonial scholar, Zimbabwean Socio-Economic analyst and researcher. For views and comments, e-mail: tonym.MONDA@gmail.com