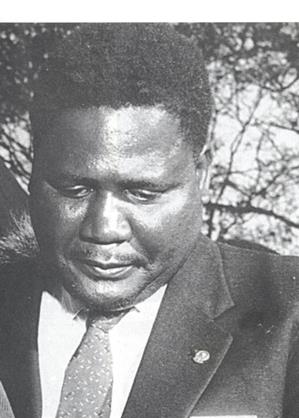 THE names ‘Father Zimbabwe’, ‘Umdhala Wethu’ , ‘Chibwechitedza’ or simply Joshua Mqabuko Nyongolo Nkomo all describe Zimbabwe’s icon and instrumental figure in the history of Zimbabwe.
This week the nation celebrates the passing on of a ‘unifier’, the late Vice- President, Cde Joshua Nkomo who died of prostate cancer on July 1 1999 and was buried at the National Heroes Acre.
In an interview, ZANU PF Secretary for Information and Publicity, Cde Rugare Gumbo, said Cde Nkomo was an icon of the liberation struggle and played an instrumental role in the dynamics of the country’s transition from the then Rhodesia to Zimbabwe.
“Having entered the political scene as a trade unionist in the Rhodesia Railways Cde Nkomo stood for the rights of the blacks who were being underpaid and subjected to harsh working conditions,” said Cde Gumbo.
“Cde Nkomo defied odds and challenged the racial injustices and stood up for the emancipation of the black man.”
Cde Gumbo said that fighting spirit drove him even when he was in the National Democratic Party (NDP) with Cdes Enos Nkala, Washington Malianga and Michael Mawema although NDP was later banned.
He said Cde Nkomo was part of the 1979 Lancaster House Conference that led to the country’s Independence in 1980.
“When he was President of ZAPU, Cde Nkomo was detained at Gonakudzingwa Restriction Camp by Ian Smith’s government in 1964, with fellow Cdes Enos Nkala, Maurice Maurice Nyagumbo and  Robert Mugabe, until 1974, when they were released,” he said.
“Following Nkomo’s release, he went to Zambia to continue opposing the Rhodesian government through the dual processes of armed resistance and negotiation.
“After Independence he contributed to the Unity Accord in 1987 that removed the tribal imbalances among the children of Zimbabwe in order to achieved development as a nation.
“That is when ZANU PF was formed and an atmosphere of peace and national identity as Zimbabweans was born.”
Cde Nkomo became the country’s Vice President after the 1987 Unity Accord, a post he held until his death.
Cde Gumbo said the land was the main thrust of development to Cde Nkomo.
“Cde Nkomo would always say ‘We want the land in its ‘totality’ and by totality he would emphasise that it was the land and everything in it including the minerals and as a Party we have managed to do just that giving land to the people,” he said.
Cde Gumbo said the various empowerment initiatives that ZANU PF achieved made Cde Nkomo smile in his grave because the Land Reform Programme has benefitted over 400 000 black households.
Cde Nkomo’s ‘totality’ has been extended to the mining companies who are supposed to cede 51 percent shares to government and pay some money for the damage to the environment and the profit that they have made so far in Zimbabwe.
ZANU PF National Chairman and Senior Minister of State Simon Khaya Moyo, last year described the late Vice-President as a flexible man in his operational diary both at home and at his office.
Cde Moyo who worked with the late as his special assistant said he considered himself lucky to have worked with the iconic giant.
“I was privileged to be his special assistant during the days of the liberation struggle and indeed post independence, in various other capacities,” he said.
“I consider myself most fortunate to have been closely associated with this iconic giant, indeed a colossus figure.
“He was a towering political giant, an icon, a man of vision a fountain of wisdom, an inspiration and indeed a man of the people.”
Cde Moyo said VP Nkomo’s’ deeds will live forever and make an everlasting reference to many Zimbabweans who believe in the total freedom and sovereignty of the nation.
“His vision on the Land Reform and economic empowerment of our people became a beacon of our development thrust,” he said.
“By and large our current policies and programmes to improve the lives of our people are a fulfillment of his dreams.”