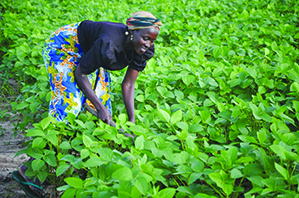 THE virtues of soyabean have been preached many times yet many farmers are still hesitant or unable to take up soyabean production.
Because soyabean was for a long time confined to large scale white farms, many black farmers developed an attitude that soyabean is a white people’s crop.
That same attitude prevailed even among the white Rhodesian farmers and agriculture officials.
One cannot help feeling that soyabean was a cash cow that they would not allow blacks to also milk.
As we all know this was part of creating economic disparities in favour of the white settlers.
Let us go back to the soyabean story.
Why are black farmers not taking up the crop as widely as its multiple benefits would justify.
First the multiple benefits need to be demonstrated to the people.
The Soyabean Promotion Task Force went a long way to do this.
The promotion lost momentum on the back of the sanctions and other economic challenges that beset the agricultural sector in particular and the economy in general.
There were other factors that kept black farmers outside the soyabean sector. One prevailing view was that soyabean is too sophisticated for black farmers.
This obviously represents a racist attitude of looking down on Africans as being inferior.
What is the sophistication about soyabean that would be considered to be above the comprehension of black people?
In 25 years of research we have not identified the sophistication that can keep blacks out of soyabean production.
On the contrary we are aware that whites have always lived with the fear of the black man’s superior prowess not only in physical, but intellectual terms.
They (Europeans) have built the myth that whites are more intelligent than blacks.
Evidence on record shows that black people have invented many sophisticated machines, even the computer and telephone!
But after discovering that many black people are just as intelligent as whites, settler Europeans created separate schools where white children attended without the fear of being out-performed by black children.
They taught their children that ‘black kaffirs’ were inferior.
How would the children react when the blacks scored higher marks in Mathematics and Science for example?
This scenario played out at one prominent private school in Zimbabwe previously all-white.
The school had separate classes where blacks were placed in their own streams. When the black students performed far better than their counterparts in a Mathematics examination, the white headmaster was bewildered and ordered a remark.
The results still showed the black children out-performing their white counterparts.
Obviously that blew apart the myth that whites are more intelligent than blacks. The nightmare for the racist white supremacist parents was that their children would then learn to respect their black counterparts.
That is contrary to their prevailing ‘world view’ that blacks are inferior.
A bit more on that later, let us return to soyabeans.
It is these same prejudices that have led to white farmers believing, falsely, that soyabean was too sophisticated for black farmers.
Even the extension department under the settler regime failed to promote soyabeans among communal farmers all the way up to independence.
Our experience with the Soyabean Promotion Programme in which the University of Zimbabwe collaborated with AGRITEX, the Department of Research and Specialist Services (DRSS) and private sector and non-governmental organisations (NGOs) to promote soyabean production among small scale communal farmers, blew up this myth that blacks are unable to crop soyabeans.
When we took the former director of DRSS and some representatives of donor organisations (all white) to see soyabean crops grown by smallholders in various communal areas including Hurungwe, Sadza (Chivhu) and Chiweshe, they were surprised.
How could black farmers raise such ‘beautiful’ soyabean crops, and on such poor soils, they wondered!
The answer is simple: given the right knowledge and necessary technical and advisory support, our black farmers can grow virtually any crop that matches our agro-climatic conditions.
We must diversify our cropping basket.
The current scenario where tobacco a non-food crop is replacing even maize, our staple is dangerous threat to food and nutrition security.
Policy makers must take appropriate action so that desperate farmers are not driven into economic blind alleys.
Another reason why whites believed soyabean could not be produced by African farmers had to do with agro-climatic conditions.
Africans were driven off their fertile well-watered lands into dry, marginal low fertility areas by white settlers.
In most of these marginal environments, soyabean does not do well.
The Soyabean Research and Develpopment Program at University of Zimbabwe also blew up the myth about soyabean not being suitable in communal areas.