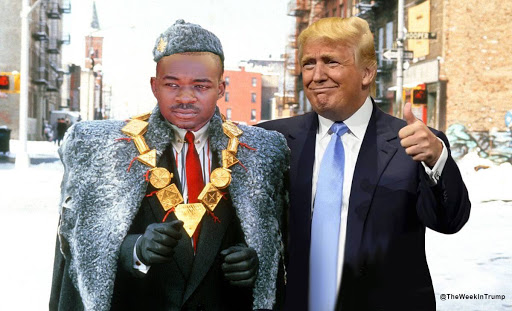 THE splits in the opposition MDC family, which started during the times of MDC- Tsvangirai, prompt one to see that besides reproducing itself into useless numerous cells,  the opposition party is not making headway on anything except  strengthening false belief in itself like the US President Donald Trump.

The fact that from the same family tree emerge applicants MDC-T and  Morgen Komichi, seeking an order to evict the respondents- MDC Alliance secretary Chalton Hwede and MDC Alliance led by Nelson Chamisa from Harvest House, which they now call Morgan Richard Tsvangirai House, shows how broken this MDC family is.

Desperation seems to characterise both  US President Donald Trump and Chamisa. Both Chamisa and Trump seem uncommitted to the basic tenet of democratic rule, that is the acceptance of the fact that power belongs to the winner of the day.

The winner in Zimbabwe is ZANU PF.

In the US, Trump is not confident he will win the next election.

This failure to accept defeat is a problem for both Trump and Chamisa.

The interesting analogy is as follows:

The US President Donald Trump’s refusal to guarantee that he will transfer power if he loses the November election, when he was asked about his commitment to the handover of power upon a change of president, during a White House press conference mid-September is telling.

“Well, we’re going to have to see what happens,” said Trump.

Trump refused to guarantee that he will transfer power if he loses the November election earning him  a scorn from his Democratic challenger Joe Biden and even from within his own party.

Besides, Trump also has been uttering, daily, complaints about the fairness of the election.

He regards use of mail-in ballots due to the COVID-19 pandemic as vulnerable to fraud and rigging because he is desperate to win in unusual circumstances.

Trump has no evidence and proof for this rigging and fraud but is desperate to trash in advance elections he knows a win cannot be guaranteed. Thus at the press conference, Trump seemed to suggest annulling what are expected to be the huge numbers of mailed-in ballots, noting that in such a scenario, he would remain in power.

Said President Trump:“Get rid of the ballots…there won’t be a transfer, frankly. There’ll be a continuation.”

Evidence also shows that Twitter has hidden a tweet by Trump containing “misleading claims” ahead of the November election.

Trump insists there cannot be a free and fair presidential election and he further demonstrates that by planning to replace the late liberal leaning Justice Ruth Bader Ginsburg of the Supreme Court, who died mid-September.

His Republican Party, which has a majority in the Senate, is then expected to quickly confirm the nominee amidst Democrats cry that the process should wait until the results of the election are known, allowing the winner to shape the Supreme Court.

On Wednesday, Trump said he thinks the election, “will end up in the Supreme Court”.

These points show that Chamisa is a duplication of so-called ? ´big men´ elsewhere.

Neither Chamisa nor Trump campaign on specific policies, beyond a few slogans.

Chamisa’s widely known instance is the January 21 2020 State of the Nation Agenda (SONA), which was very empty.

In January 21 2020,  MDC president Nelson Chamisa was not expecting to be allowed by the police to launch his much anticipated SONA 2020 mini-rally at Stodart Hall in Mbare, Harare.

When they were given the go ahead, instead of laying a sound plan of action for 2020  the speech was empty.

Just like Trump, who has been hoping back and forth, trying, last minute, to win members of the public he has sidelined all along, Chamisa has tried several times to ride on Zimbabweans’ backs.

Both portray political systems, which are fundamentally corrupt and incompetent,  with a lot of in-house problems.

Trump demoted his campaign manager shortly after a campaign rally in Tulsa, Oklahoma; a campaign that was widely known for its poor attendance.

Both Trump and Chamisa are prone to accusing other people for their failures.

Chamisa accused the ruling government of rigging the 2018 elections.

Both Chamisa and Trump are hooked on charismatic leadership, but a lack of depth and character results in dismal failure to deliver on tangible promises.

They have a tendency to employ speeches as problem-solving strategies.

Chamisa’s MDC-A has been  pushing the illegal regime change agenda,  doing the bidding of Western nations.

The alliance’s never ending calls for demonstrations aimed at diverting Government from pursuing its Vision 2030 agenda.

Chamisa is seeking to violently take over power through destroying public infrastructure and sabotaging the livelihoods of citizens.

MDC-A should transform itself into a progressive movement following its defeat in the 2018 general elections, but this divided house is not standing, just like the desperate President Trump in the so-called developed states.