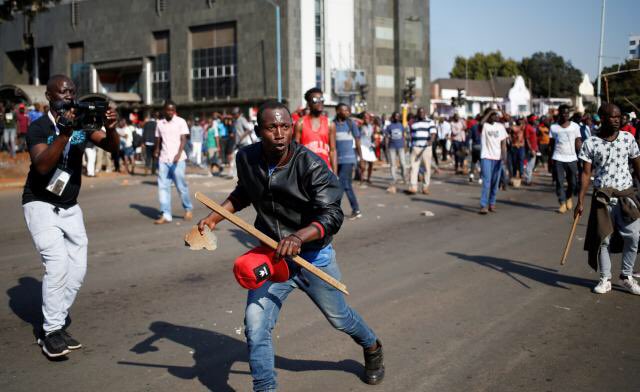 THERE is something about colonialism that even though it may be hidden in subtlety, it will still find a vent to bare itself because it is rooted in hegemony and brute force.

This is something that the embattled opposition ‘leader’ Nelson Chamisa unwittingly revealed during his party’s 5th ‘Congress’ on Saturday last week.

Such is the nature of colonialism and dispossession that even as the perpetually beleaguered youngster frantically tried, but with no success, to project himself as a latter day nationalist to his evidently disinterested supporters, something was amiss.

Power can never be grabbed through reckless utterances at the podium.

The late Morgan Tsvangirai, MDC founding leader, walked through the same path but with no success.

What both Tsvangirai and Chamisa missed was the fact that power resides in the hands of the majority, which majority cannot be swayed by insipid comparisons with the real heroes of the country’s struggle against colonialism.

Our country’s nationalists fought for the emancipation of the majority.

They did not take up arms for the country to be subjected to childish antics.

Land was the issue.

It still remains that.

The land has always been, and remains, an area of contestation; and for Africans it is a source of pride, a way of life.

This writer has been reading, for the umpteenth time, the late great Charles Mungoshi’s 1975 book Waiting for the Rain, the same way I have been reading Chamisa’s politics and ideological orientation as it continues to unravel.

What emerges are new perspectives from the reading of the two, even though they are miles apart in so far as their ideological grounding is concerned.

After all is said and done, it is in fact an insult to Mungoshi to put him in the same sentence with the likes of Chamisa, but it cannot be helped.

Chamisa has just to be given one or two lessons on what national interest is.

Let us begin by looking at Waiting for the Rain and what we will describe as Chamisa’s escape from reality as depicted by the journey motif.

Through setting and the journey motif, Mungoshi is able to lay bare the contradictions of hope prevalent in colonial Rhodesia, and this is a Rhodesia that Chamisa has been trying to relive as drawn from Tsvangirai’s politics.

Lucifer’s (read Chamisa) contradictory character, his detachment from the physical and psychological barrenness pervading the lives of his people, as depicted through his bus journey to Manyene, draws him closer to Sam Mapfeka in Stanley Nyamfukudza’s The Non-Believer’s Journey (1980).

However, unlike Sam, who is not blind to the colonial machinery that robs his people of their land, Lucifer views the scenario that confronts him through the window with detached indifference.

Juxtaposing the glaring inequalities between the European side epitomised by the Hampshire Estates and the Africans represented by Manyene Tribal Trust Land, Mungoshi highlights the dispossession, dislocation and alienation of the indigenes by the colonial oppressor.

Ironically, Lucifer does not see it that way.

He sees it all through the eyes of an impartial traveller; who sees nothing and hears nothing beyond what he tells his heart.

Chamisa sees himself as a God-given present to Zimbabwe who is destined to lead this country through anarchy and confrontation.

In his warped mind is the idea that he has started a ‘new’ revolution from which he will equate himself with the likes of Herbert Chitepo, Josiah Tongogara, Dr Joshua Mqabuko Nkomo and Lookout Masuku.

His mind, while admiring nationalism, tells him that he can create his own form of the same.

What is lost on the boy is the fact he cannot rewrite history.

He can never make MDC Alliance a nationalist party when all that his party represents is a feeble attempt at smuggling neo-colonialism via the backdoor.

The irony stinks when closely looked at.

Dear reader, link the above assessment with Chamisa’s threats to overthrow the Government and one will get an appreciation of where he wants to take this country to.

So, in Gweru, Chamisa makes all sorts of threats against the Government.

He demands fresh elections, he wants talks, while threatening to cause anarchy.

Let us hear the boy speak:

“I have already said that 2023 (when the next elections will be held) is too far.

We must make sure that we have a democratic election in this country as soon as possible.

If they (ZANU PF and President Emmerson Dambudzo Mnangagwa) refuse to hold an early election (during Chamisa’s prescribed time frame) we will force them.

Some will ask how this will be achieved. Zimbabwe has a dark cloud hanging over it, until and unless the dark cloud is removed, this country is going to slide into further problems because we had a disputed election.

When we start doing what we want to do (violent demonstrations) I know that they will panic…..”

We have a message for Chamisa and those who are planning to destabilise the country that, no one will allow them to destroy peace and tranquillity in the country.

They can harp all they want but when the time comes, the law will be waiting for them.

No one will be spared, including Chamisa himself.

Chamisa has overestimated himself for too long and has no right whatsoever to unleash violence and then go unpunished.