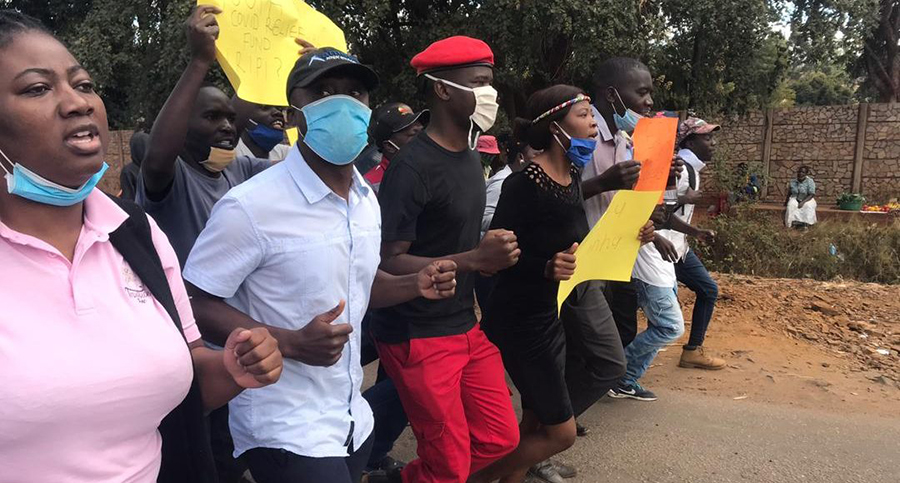 WHY is it that the alleged Nelson Chamisa assassination attempt coincided with the visit of the UN special rapporteur on the Negative Impact of Unilateral Coercive Measures on the Enjoyment of Human Rights, Alena Douhan, from October 18 to 28 2021?

“They nearly took me out. He wants me killed and dead. They want blood and more blood. They missed by seconds because our #Godisinit. Violence & assassinations won’t solve complex national challenges. I’m in Nyanga today meeting the  community. Change must happen. The citizens are clear!”

Before looking into this submission, Chamisa had also told BBC ‘Focus on Africa’ that he survived an attempt on his life.

“We heard gunshots, the car was shaking,” he said.

However, the ‘holes and lies’ in Chamisa’s statements got tongues wagging as elucidated in the following tweets:

Comrade ZIMBABWE @MR_Chipunz: “Who is they? Am not sure who you are referring to, please be more clear Nelson or do you fear that your baseless accusations could land you in court, which is not helpful seeing that the party has no money?”

Mr Nhidza @NhidzaMr: “Will not buy this if people want to assassinate someone they just do it so the story has holes.”

Fidelis Gapare @FidelisGuevara: “Just stop the drama. Can’t you see no one is buying it, even your puppeteers are clearly embarrassed even to tweet their usual obnoxious statements.”

Blessing Gwaze @blessing_gwaze: “If they wanted to take you out, I’m sure you would have been out…the holes on your windows were clearly not bullet holes .Stop lying to the people in order to gain sympathy..”

Simba Chuma @Simba Chuma1: “With all due respect. Are you the one supposed to be posting this. Your spokes(person) is there for what…This tweet leaves a lot to be  desired. Attention seeking is gonna water down your campaign…”

Indeed, Chamisa and his kind have a record of faking  assassination attempts and abductions.

In 2019, MDC Alliance demonstrations coincided with the, 29th SADC Heads of State and Government Summit of August 16-18 2019 and the 2019 Tokyo International Conference on African development during August 28-30.

On August 13 2019, MDC Alliance youth chairperson for Mufakose, Blessing Kanotunga, claimed he was abducted and assaulted by five armed men as he slept in his home.

Morgan Gumbo from Mufakose also claimed the same on the same day.

On August 14 2019 Tatenda Mombeyarara (co-ordinator of  the Citizens Manifesto) also claimed he was abducted at his home in Chitungwiza, assaulted  and left for dead in Hatfield.

Is it not surprising that the fake abductions by MDC Alliance members always coincide with important regional and international events!

In this regard, theatrics by Chamisa and company were expected, considering the visit by the UN special rapporteur and the impending COP26 to be held in Glasgow, Scotland, in November, which President Emmerson Mnangagwa is set to attend.

Perhaps the Permanent Secretary in the Ministry of Information, Publicity and Broadcasting Services Nick Mangwana was correct when he tweeted: “We are in the eve of #COP26 and the Special Rapporteur’s engagement is about to happen. Do you know what else has started? The Dramas.”