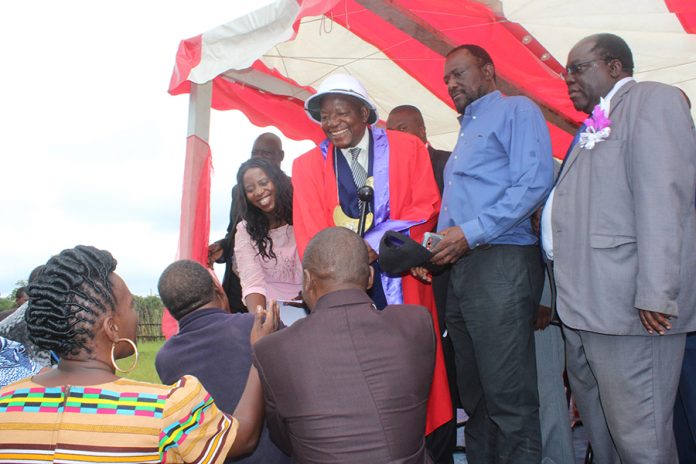 By Sheldon Hakata
Recently in Buhera

THE institution of chieftaincy, on the African continent, has in both modern and pre-colonial times been critical in steering socio-political affairs.
Prior to colonial rule, chiefs were the sole socio-political heads of states and their importance has been transferred to the post-colonial states.
I recently witnessed the installation ceremony of Chief Makumbe in Buhera.
By the time we arrived at the Ngundu Primary School grounds where the installation took place, all had been set.
The road to the grounds proved indeed that the day of installation had arrived as vehicles ferrying important guests, who included Chief Chiduku, the leader of Manicaland Chiefs’ Council, the Provincial Administrator, area headmen and village heads, snaked to the venue.
School children, teachers, health workers, civil servants, women and men from surrounding villages were part of the train.
As soon as the candidate to be installed arrived, the heavens opened up.
Beginning with a light drizzle, a torrent followed.
And this was no inconvenience.
The people were delighted; this was a good omen.
In the West, on a coronation, guns are fired, parades march to salute the incoming king or queen.
According to traditional and cultural experts, the falling of rains at such a time signifies the acceptance of the installed chief by the ancestors.
And this acceptance was fully appreciated by the founding house which in the last two or three decades have been excluded from their heritage.
“I am happy that I have brought back the chieftainship into the founder’s house. It had gone for 100 years. I will represent the wishes of my people, ensuring that we all live in harmony, peace and without fear,” said Chief Makumbe.
“I will ensure that services are brought nearer to the people because people are travelling long distances to access, for instance, the police, clinics and schools.
“And my reign will be characterised by fairness and transparency.”
The Makumbe people are of the Moyo Sinyoro totem.
The chieftaincy is an offshoot of the Neshangwe chieftainship. It was founded by Ngundu, the son of Makumbe.
The first chief to be appointed Chief Makumbe was Ngwuwaya Ngundu in 1902.
His reign ended with his demise in 1918.
In 1919 Matsveru was appointed the second Chief Makumbe and ruled up to 1933.
The third in line was Chief Marume who ruled from 1935 to 1939.
The fourth Chief Makumbe was Diki who was appointed in 1952 and ruled up to 1954.
Zinhanga under Mombeyarara House took over as the fifth Chief Makumbe from 1954 to 1963.
The sixth Chief Makumbe was Manjengwa who ruled from 1963 to 1974.
From there, Mutirwara took over as the seventh chief from 1974 to 1979.
The eighth Chief Makumbe was Chakanyuka Hwata who ruled from 1984 to 2012.
Such events do not take place too often and it is therefore important that when they do, people turn up in numbers to support and pay their respect to the incoming chief.
Shephered Chengeta, Chief Makumbe the ninth was born on February 6 1966 in Ngundu Village, Buhera.
He did his Grade One at Inkomo Barracks, Darwendale, before he transferred to Chatindo Primary School, Buhera, where he completed his primary education.
He did his secondary education at Nerutanga, Gwebu and Redcliff Secondary Schools and Advanced Levels at Milton High School in Bulawayo.
He later joined the Zimbabwe National Water Authority as an apprentice in Electrical Engineering and studied City and Guilds in Electrical Engineering. Chief Makumbe, the IX is also a holder of a diploma in Business strategies.
The chief is also a businessman who runs Ralton Electrical, a company he founded in 1997 and is a proud husband and father of two boys and three girls.
The office of traditional leaders remains critical especially in rural local governance.
The Constitution of the country and the Traditional Leaders Act are the key statutory instruments regulating the operations of traditional leaders.
Chief Makumbe also promised to stamp out corruption which had in recent years retarded development.