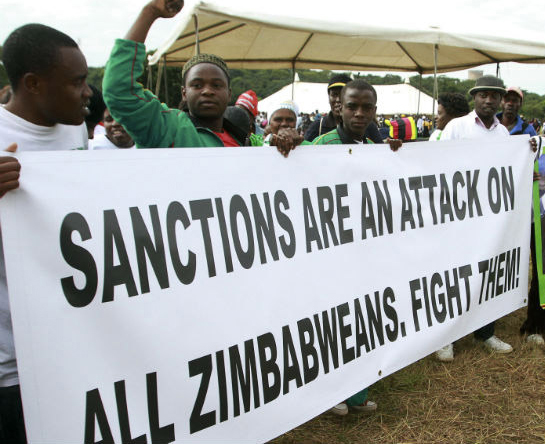 THERE is a class of Zimbabwean elites, some claiming to be economists, who, since 2001, have been telling us that the US sanctions law against Zimbabwe, the Zimbabwe Democracy and Economic Recovery Act, should be read literally as a piece of US legislation passed by whitemen and their former slaves for the purpose of bringing ‘democracy’ and an economic boom (or turn-around) to Zimbabwe.

These elites seem to be surprised that this American law has not brought the expected good things to Zimbabwe.

To this day, we hear voices saying sanctions should now be lifted because they failed to deliver the original objectives.

We now raise the issue because, with SADC declaring October 25 Anti-Sanctions Day, some among this elite are now saying the illegal sanctions should be lifted because they had failed to achieve their original objective of targeting politicians in the ruling Party while fostering an economic recovery in Zimbabwe for businessmen and for the rest of the people.

At one time, we were subjected to a false headline story: ‘US apologises for sanctions’ which made many believe the unconditional lifting of the financial and investment embargo was imminent!John Perkins, one of the most accomplished economic saboteurs serving the US empire for more than 40 years, has this to say about highly schooled but naive people:

“People who say such things often hold diplomas certifying that they are well-educated.

However, these people have no clue that the main reason we (the US) establish embassies around the world is to serve our own interests, which during the last half of the twentieth century meant turning the American (US) republic into a global empire.

Despite credentials, such people are as uneducated as those eighteenth century colonists who believed that the Indians (native Americans) fighting to defend their lands were servants of the devil.”

So, the stupidity or naivety of this class of elites serves a purpose.

In the US, as in Zimbabwe, natives fighting to reclaim their land are condemned as servants of the devil and ‘land invaders’.

When John Perkins publicised his 2005 book called Confessions of an Economic Hitman in 2006, those of us on the ZTV ‘National Agenda’ programme asked why Perkins was allowed to publish and promote the book after trying to do so and being blocked by his handlers for more than 24 years.

Our answer was that by 2005, the missions and means employed in imperialist economic sabotage had changed so much that Perkins’ former handlers and paymasters felt the risk of exposure and ventilation was now minimal.

But the gains to be made by the empire for fawning repentance, transparency and honesty through confession were phenomenal.

Confession creates the false but useful impression that the one confessing has come to the same level as the victims of his sins and all those hearing the confession.

It creates feelings of solidarity which are not genuine.

In other words, John Perkins’ book marked the end of one very successful era of imperialist economic sabotage and looting of the South and the East; but it refused to go into the new era and to ventilate how the same empire sabotages other people’s economies in the era of the myth of ‘open society’ and transparency.

Being citizens of one of the countries being sabotaged and being looted in the new era, patriotic Zimbabweans will be interested in how the new sabotage is being conducted and how it differs from what has been documented already.

This is a critical question because patriots who liberated this country face two challenges –  to keep alive and vivid the historical reality of imperialist sabotage of Africa since the days of slavery and to explain convincingly the new and very sophisticated methods of imperialist economic sabotage being employed right now in front of our eyes.

The old sabotage has been well documented in such books as: Destructive Engagement; Apartheid Terrorism; South Africa at War; Harvest Under Fire; Dark Days in Ghana; The Assassination of Patrice Lumumba; The Real Terror Network; and The Black Book of American Intervention in Chile. Unfortunately, John Perkins’ book gave the impression that it was a confession about past sins of the US which ended and will no longer be repeated; when in fact, its importance was to magnify the illusion of the US empire as the ultimate ‘open society’ so that it can continue to sabotage and loot the world using new methods in a new world situation.

The Herald’s April 18 2013 article titled ‘US apologises for sanctions’ was based on a lecture given by former US Ambassador to the UN, Andrew Young, at SAPES Trust in Harare.

It cited Young as saying:

“The decision for me to come here was made by the Secretary of State (John Kerry) and approved by the President of the United States (Barak Obama)… We can forgive each other… There is no future without forgiveness… Take positives of the past and use them to shape the future.

We should ask ourselves, how can we give positives to the suffering of the past?… It is Zimbabweans who can decide who they will elect to lead them and I told him (former President Robert Mugabe) that whoever wins the forthcoming 2013 elections, the US will work with that person to improve Zimbabwe.

We want to see Zimbabwe transform into a peaceful growing economy.”

On his meeting with former President Robert Mugabe, Young was cited as saying:

“We basically had a good time reminiscing about the good old days…  The President received the message that we were prepared to remove the sanctions.

He was quite understanding and he warmly welcomed us.  We told him about how the US deeply values building close partnerships with Zimbabwe and how we attach great importance to the restoration of positive relations between the two countries.”

There was no text of an actual apology in the article and the headline remained dangling on its own!

The icing on the entire hoax then came from Ambassador Reuben E. Brigety, US Deputy Assistant Secretary for African Affairs, another African-American who was accompanying Young.

He was reported as saying:

Zimbabwean patriots, at this very moment, need to distinguish between the old methods of imperialist and racist economic sabotage and the new methods, because the new methods are already in high gear.

The old approach to sabotage, documented by Perkins, was based on secrecy and denial.

When it became necessary to admit intervention and interference, the justification was given in anti-communist or anti-socialist terms.

When Perkins was being dispatched to Indonesia, he was told that the reason for urgency was that Indonesia

was the next communist domino after Vietnam.

The old Western sabotage also depended on big and extravagant projects in each country, which had to be promoted as the panacea for underdevelopment and as the capitalist answer to communist frugality.

The big projects were promoted as being so strategic and central to the national economy that they alone would be able to unleash phenomenal ‘growth’ which was measured in terms of projected Gross National Product (GNP).

The main political product of the old saboteurs was supposed to be a country saved for ‘the free world’ — pulled away from the curse of ‘communism’.

But the key saboteurs were supposed to be unknown and discrete.

“Discretion was their hallmark; they dealt with heads of state and other chief executive officers who expected their consultants, like their attorneys and psychotherapists, to honour a strict code of absolute confidentiality.

Talking with the press was taboo.

It simply was not tolerated.

As a consequence, hardly anyone outside MAIN (Perkins sabotage firm) had ever heard of us, although many were familiar with our competitors, such as Arthur D. Little, Stone and Webster, Brown and Root, Halliburnton and Bechtel.”

In the new era, there has been little fear of close scrutiny from an equal super power because the US has seen itself as the only surviving super-power since 1989.

So the sabotage has been repackaged drastically:

It is not only the mission by Young in 2013 which disappointed us Africans.

The Obama presidency was also a big disappointment to African-Americans, because it did not enable them to see what was coming after it: Donald Trump and the revival of white male chauvinism and racism through the White House itself!

Significantly, Young is also a trained minister of religion and a preacher.

That means soft and transparent power.

That also makes for convincing confessions.

The new saboteurs offer an escort service to a country’s key institutions who in turn abandon all other factors of the whole political economy and focus on just the few points marked by the escorters in a dark tunnel or enclosure at one time called ESAP, which the escorters have carefully dug and lighted.

This enables the escorters or saboteurs to kill the country by manipulating just one or two factors, since the country will have willingly abandoned all the other factors to focus also on those few points or pointers highlighted by the builders of the economic or financial tunnel.

Here is a glimpse from Professor Michel Chossudovsky on how the Russian economy was almost over-run by US saboteurs from Harvard University and USAID:

“The ruble’s free-fall spurred Moscow’s largest commercial banks into bankruptcy leading to the potential take-over of Russia’s financial system by a handful of Western banks and brokerage houses … Since the outset of Russia’s macro-economic reforms (escort service), following the first injection of IMF ‘shock therapy’ in 1992, some US500 billion dollars worth of Russian assets — including plants of the military-industrial complex, infrastructure and natural resources — have been confiscated … and transferred into the hands of Western capitalists…”

The short answer for what Zimbabwean patriots should do is: Do not focus only on those factors chosen and highlighted by the escorters or saboteurs.

What did Andrew Young’s Mission achieve?

MaDzimbabwe should not listen to those who say Young’s mission served no purpose, that it was useless.

It actually accomplished a lot for US ‘diplomacy’.

To believe the West one has to imagine that the violation of human rights in the history of Zimbabwe started when the white man lost ‘his private property’ to the very same African natives from whom he had looted it between 1890 and 1980!