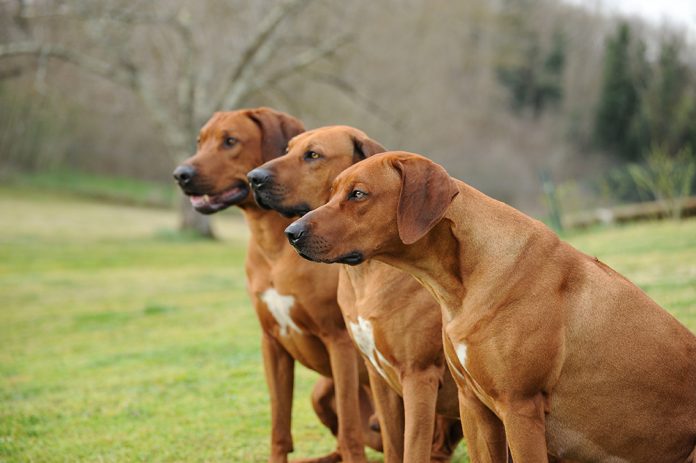 DOGS have always had a close link to mankind.

This is greatly owed to their intelligence.

They look a person in the eye when he speaks and analyse the tone and word to uncover its meaning. Their pack mentality inspires them to be followers of an alpha male.

When dogs are under human care, they learn to let their master become the alpha of the pack.

To him they show loyalty and offer servitude.

The loyalty, affection, obedience and servitude they offer to man is a part of their nature which existed before they became tame.

Sayings such as: ‘A dog is man’s best friend’, are testament to how well man and dog get along.

Dogs are by nature territorial and thus they mark the man’s yard with their urine and dutifully fend off any intruder, human or animal.

The barking is a warning to discourage a territorial breach and to alert their master on what is taking place.

Dogs are social animals that need other dogs to groom, scratch, tickle, warm and play with.

This is the reason they are so affectionate towards humans.

They have killer instincts as they are canines that, in the wild, would survive exclusively on meat.

This makes them good hunters, along with their super noses that have a sense of smell that is 10 times that of humans.

The pack mentality of the dog allows it to call for back-up if a situation escalates and this makes them effective at hunting and security.

Dogs also have character and this makes them feel somewhat like part of the family.

The loss of a dog can be hurtful to a human because of the unique character each dog exhibits, making it human-like.

Few other domestic animals leave as deep an impression on humans as dogs.

Ultimately, it seems the only trait God withheld from the dog is speech.

Even so, it is not uncommon to hear humans talking to dogs and the dogs responding accordingly to commands and instructions. Some even try to respond verbally by barking or wincing with the appropriate tone.

They learn to respond to their names at a tender age.

They also perform tricks like standing on two legs to imitate humans, shaking hands, sitting down, fetching and rolling over when instructed to.

They are fast learners and want to impress the alpha at all times. This desire to make their leader happy has led dogs to walk blind people, entertain children, herd livestock, rescue people in danger as well as perform other heroic and charitable acts.

Dogs are now altogether more popular with humans than the rest of the animals.

Unlike cats, many dogs have become completely dependent on mankind and if abandoned, reintroduced to the wild or go stray, they are likely not to survive.

Among these dogs, there are numerous breeds whose kinds define certain traits that may be absent or less prevalent in others.

Some were bred by man to carry these traits.

Here in Zimbabwe, dogs have always been a part of human society.

The name ‘mbwa’, meaning dog in Shona, is used in Swahili, kiRundi, kiNyaruwanda and other languages that were used around the Great Lakes Region where most Bantu groups migrated from.

This shows that the dog was always present before the Bantu family split up into Nguni, Karanga and other groups.

In fact, in ancient Egypt, the dog (Anubis) was used as a symbol of the afterlife.

Anubis was depicted in black, a colour that symbolised regeneration, life, the soil of the Nile River, and the discoloration of the corpse after embalming. Anubis is associated with Wepwawet (also called Upuaut), another Egyptian god portrayed with a dog’s head or in canine form, but with grey or white fur. One of his prominent roles was as a god who ushered souls into the afterlife.

He attended the weighing scale during the ‘Weighing of the Heart,’ in which it was determined whether a soul should be allowed to enter the realm of the dead.

In pre-colonial southern Africa, dogs were used for security, herding livestock and hunting.

However, there is one dog in particular which went a step further.

It helps humans track, trap and fight lions to the death without fleeing at the smell of their scent like other dogs.

It is known as the ‘Khoi Khoi dog’ and is as primitive as the Bushmen whose presence predated the Bantu migration.

This dog was mixed with the greyhound in the 17th Century and by 1922, the mixed variety had multiplied enough to be drafted as a standardised breed.

By 1928, the breed could be found in Britain and other distant places.

It was known for strength and courage and made a name for itself because it would not back down from an attacker, even a lion.

It typically carries a golden or reddish brown coat like that of a lion.

It also grows tall and long and was among the largest of the indigenous Zimbabwean dogs which are often called mongrels.

Besides this, the dog has a line on its back with fur going against the grain and resembling a ridge.

This can be found on the back of a lion.

All these attributes led the dog to be called a lion dog.

In ancient times, some lions would become curious and attack humans to taste their meat.

These would become man-eaters and would have to be tracked down and killed before killing again and the lion dog was used in such cases.

Dogs are known to be erratic, freeze or breakdown when they sniff out or meet a superior predator like a leopard or lion. They flee towards their master and this often leads to the death of humans.

The lion dogs would scare off the predator, corner it and make it possible for humans to kill it.

Some of the dogs would get killed in the process but they would not stray from their mission.

This earned them the reputation that gave them their name.

When the white settlers entered Zimbabwe, they were impressed by the size, coat, bravery and reputation that the lion dog enjoyed.

It was legendary and named a ridgeback because of the ridge-like line on its back which is typically found on lions.

Because this breed was indigenous to Zimbabwe, the settler-community called it the ‘Rhodesian ridgeback’.

The Boers (white farmers) of South Africa preferred to use this dog for hunting.

It was strong, large and brave but not excessively heavy.

They also had German/Holland-bred dogs like the bullmastiff, a cross between a mastiff and a bull dog.

These were much heavier and thus more suited for providing security and herding cattle.

The Boers mixed their bullmastiff with the Zimbabwean lion dog to produce a mix between the two.

It became popular among the white settler-community of southern Africa and was called the boerboel (boer-bull).

Today the boerboel, along with the ridgeback and mastiff are highly priced.

Price-wise, they are in the same category as German shepherds and dobermans.

The problem with ridgebacks is that they are still known as Rhodesian, though post-independence the country is now Zimbabwe.

The breed’s presence in southern Africa predated that of the Rhodesians (white settlers) and the colonial era is over.

Why then continue to use the name Rhodesian ridgeback?

It should be known by its ancestral name of lion dog/hound.