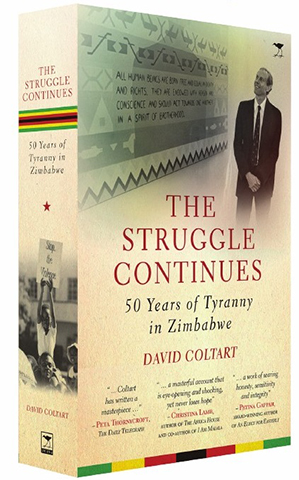 MOVEMENT for Democratic Change (MDC) legislator and former Rhodesian Selous Scout David Coltart’s demonising of the liberation struggle through his memoirs The Struggle Continues-50 Years of Tyranny in Zimbabwe is an attempt to vilify the liberation struggle while hiding some colonial injustices perpetrated by the former Rhodesian regime.
Launched early this year in South Africa, the book attempts to highlight the Matabeleland disturbances (Gukurahundi), yet ignores the Chibondo atrocities where thousands of innocent civilians and former freedom fighters were murdered and dumped in disused mine shafts in Mt Darwin (Chibondo Mine Shaft).
Coltart himself was part of those atrocities when the face of the liberation struggle changed in 1976 as more people trekked to Mozambique and Zambia to join the liberation war.
In order to frustrate these efforts, the regime started using counter-insurgency tactics as a way of countering the revolution.
Selous Scouts pretended to be liberation war fighters and in some instances, addressed pungwes in rural areas where they would round up whole villages and massacre them and later dump the bodies in mine shafts and mass graves.
Coltart’s advancing of modern allegiance to Rhodesia as a good nation for whites, considering that the country Rhodesia was named after a man glorifying it, is synonymous with glorifying the person of Cecil John Rhodes, or human plunder.
It is to glorify a hated form of capitalism that displaced the Africans for the betterment of the white race since the birth of the colonial project until this very day.
This mentality, somehow, purports that Rhodesia was a better colony in most white writings.
Coltart also states the same as he portrays Rhodesia as a good colony compared to other colonies that were under white rule which was not British.
One stark fact, however, is that most of the construction was for the benefit of the white minority.
Such thinking advances the myth that Rhodesian rule was justified and better than other forms of colonialism on the African continent.
In a similar manner, this insinuates the ‘good whiteman’ attribute to Rhodesia’s image.
As such Coltart advances modern allegiance to Rhodesia as a ‘good whiteman’ nation.
Coltart’s book further offers a historical reflection of the hostile competition that existed among different colonisers of Africa.
Each one of them viewed itself as better than its continental plundering counterpart.
Probably Coltart’s submission could have worked better as a tourist marketing statement during the days of Rhodesia.
It would be a good marketing statement on the habitable aspects of Rhodesia than any colony in Africa geared to invite more looters and exploiters to Zimbabwe.
Coltart compares Rhodesian colonialism to that of the Boers in South Africa. He suggests an undying level of patriotism to Rhodesia which he could not omit in the memoir of his life.
It overwhelmingly categorises evil, insinuating one evil to be less evil than the other.
Evil is evil in whatever form or dosage.
Coltart further submits the idea of Garfield Todd as a champion of racial tolerance. Todd established himself as a distinguished educationist, resulting in him being knighted by the Queen of England for his service to Africa.
In Coltart’s book, he is appraised for his aspirations to ‘advance’ Africans.
This is in itself problematic because it suggests a level of African backwardness redeemed through white philanthropy.
As a result, this can be said to be one of the reasons why the ‘good whiteman’ mentality tag can be attributed to Todd as one reads the book.
However, one omission by David Coltart is that our lack of advancement as a race was colonially constructed to glorify the role played by people like Todd.
As Coltart presents his case, he ignores that Todd also merged philanthropy with political interests.
This way, he was he was able to win the support of many Africans in the political arena.
In 1953 he became prime minister in Rhodesia.
This further explains why he was an opposition political party leader after the ban of nationalist parties.
David Whitehead was another opponent of the Rhodesian Front.
This summarises how white liberals also had political interests in the country as they equally presented themselves as purely benevolent humanitarians.
While it is prudent that white liberals were only guided by humanitarian virtues, it is also important to highlight their ulterior motives.
For instance, it is clear that the entry of people like Todd into mainstream politics was not only for defence of the interests of the marginalised Africans.
It might not be wrong to also think that Todd’s entry into politics, as presented by Coltart, was to manipulate the number of Africans through the ballot to serve the white interests.
The idea of spreading white supremacy is manifest in Coltart’s self-portrayal as a benevolent individual who rendered his expertise to peace-building during the turbulent era of the so-called Gukurahundi.
What is worth noting in Coltart’s memoir is that his legal aid to ZAPU cadres seems to have been for political expedience than philanthropy.