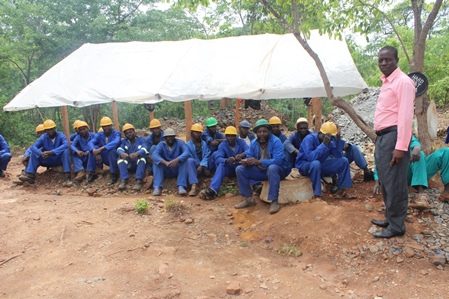 SHAMVA South House of Assembly Member, Joseph Mapiki says corruption manifesting in a single mining claim being awarded to multiple owners is threatening the production of gold by small-scale miners in the area.
The Ministry of Mines and Mining Development has over the past year struggled to address the problem of different people being allocated the same claim by its officials, a situation that has created a lot of conflicts and scaring away investors in the mining industry.
In an interview with The Patriot, Mapiki said a lot of mining activities in Shamva have stopped due to conflict over control of claims because of multiple allocations.
“Small-scale miners in my constituency used to produce more than 20 kilogrammes of gold that was sent to Fidelity Refineries,” Mapiki said.
“However, due to a lot of misunderstandings regarding the ownership of claims, many miners have since shut down, a situation that has reduced production of gold in the area.
“Disputes regarding multiple allocations of claims are increasing in my area and there is danger that they might degenerate into violence.”
The parliamentarian said he had approached the ministry to resolve the matter.
He said the allocation system must be improved.
“I am currently in talks with officials to resolve the matter urgently so that mining activities can resume,” Mapiki said.
“The allocation system is very poor and leaves more space for manipulation by unscrupulous mining commissioners.
“The ministry should come up with a system that curbs such activities to boost the security of investors and players.”
Meanwhile, Mapiki criticised gold millers for fleecing miners during the milling process of gold ore.
“We are also concerned about the millers who are cheating miners by taking more than70 percent of the total output,” he said.
“Miners have since threatened to boycott sending their ore to local millers if the current situation persists.”
Minister of Mines Walter Chidhakwa said double allocation of claims was one of the major concerns in the country and his ministry has been receiving such cases from different parts of the country.
He said affected beneficiaries should report their cases to the ministry so that they could be resolved.
“We have been receiving cases of ownership wrangles countrywide where a claim is allocated to more than one person,” he said.
“However, under normal circumstances the person who first benefited the claim is the owner.”
Chidhakwa said the government has intensified its efforts on the introduction of a digital allocation system that would curb activities that are not transparent and ensure security of ownership in the mining sector.
“We will soon be introducing the cadastral system in mines for proper licensing procedures to fight concession boundary wars among miners,” he said.
“This system will enable miners to easily plot their claims on a computer and create a map that cannot be tampered with.”
In 2010 the then Minister of Mines Obert Mpofu came under the spotlight after he was sued by one of the mining commissioners he had transferred to other stations on allegations of issuing mining claims to undeserving people.
Minister Mpofu also accused the commissioners of issuing licences corruptly and for speculative purposes, and in the process turning away genuine investors.
The mining sector accounts for 16,6 percent of gross domestic product and more than 50 percent of total exports into the country, apart from employing thousands of people.
In the 2014 National budget, the mining sector has been identified as one of the major drivers of the economy hence the need to urgently address challenges that threaten the sector.