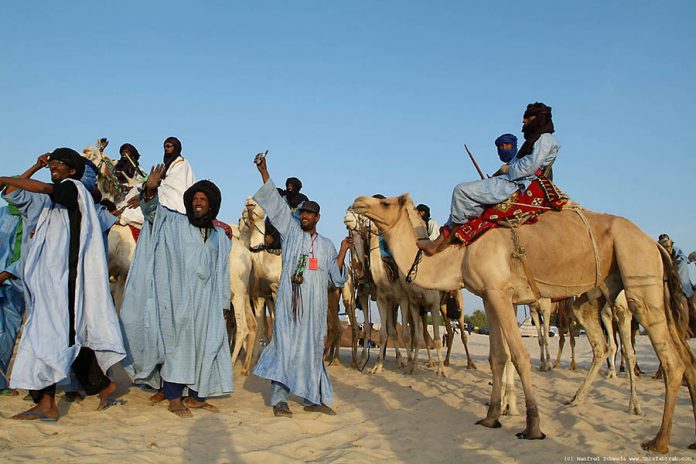 ICONOGRAPHIC and epigraphic evidence also suggests some connections of Saharans with pre-Christian Nubia.

Ancient inscriptions in the Tuareg writing (called Tifinagh) on rock paintings are found in association with depictions of camels which are commonly used now by both the Tuareg and Teda and anciently with representations of what Camps calls the evolved Libyan warriors who are depicted through a bitriangular schematism.

The figures are sometimes associated with horses and other triangle configurations. The triangle is representative of the horn.

The horn in Saharan parlance, and probably in early Erithraean or Afro-Asiatic culture, in general, is associated symbolically with and signifies the hearth or fire altar.

At Naga’a the deities hold weapons with cruciform handles exactly like the Tuareg saddle pommel.

The trident is a symbol for the God of water and for the Kanuri it signified the hearth.

In the Tassili, at Ouan Mellen, in the Sahara there are three figures with two triangles comprising their chests and there are faces with long pointed ears on Karanog pottery in Nubia.

At Ouan Bender, a hut made of triangles is associated with a camel. Certain of the Adebuni tombs of the desert show horned or antennaed tombs reminiscent of these same mouthless faces.

The designs on Nubian pottery at Karanog circa the 4th-3rd Century AD and elsewhere consists of triangles and horned altars and the trident.

Rock drawings of horned altars appear in Nubia at Tafa or on pottery.

Sometimes they are decorated altars with a pedestal and horns on X-group (Nobataean) pottery.

Those that appeared in Southern Egypt, the homed altars, are ascribed to the Blemmyes by Hans Winkler.

These altars were considered to be connected with the Table of the Sun of the Macrobian Ethiopians, mentioned by Homer (8th Century BC) and Herodotus, who had their houses underground like the later Ethiopian.

Trogodytes called Megabari mentioned by Strabo, Diodorus and others several centuries later, who were most likely the same people.

As mentioned previously, the group of people called Astures or Astrikes, who were said to be native to both Ethiopia and Libya, may be the forebearers of those first to be called Tuarek and Tura and Dirku in Africa.

It is most likely that the migration that brought the camel and veil came into North Africa from the East of the Nile long after the introduction of the horse.

J.A. Rogers said that the Berbers claim descent from the tribes who were called the Matzoi (Madjayu)in Nubia.

This correlates well with the statement made by Ibn Khaldun, of the origination of the Tuareg of the Maghreb or veiled Berbers in the riff area of Abyssinia.

Even in the rather famous Sudanese work ‘Infaq al-Masuri’, Mohamed Bello claimed that the Tuareg or “Beri-beri are the remnant of the Berbers who lived between Zinj and Habash,” which was the Afar area.

There is a considerable mass of historical evidence to suggest that the Tuareg were in part a westward extension of the ‘Ethiopian’ Trogodytes known in more remote times as Blemmyes, Bedja and Madjayu or Medid and Afar, and that they were the people who brought a type of tomb common to both Abyssinia and the Nile to the Sahara.

Certain archaeologists have identified the Madjayu and Blemmyes with the cultural complex called pan-Grave in Nubia which showed close affinities to the C-group complex.

The Madjayu (or Medid in late texts)  people who occupied Nubia and the desert mainly East of the Nile were  the soldier caste or policemen used by the ancient Egyptians.

They are considered ancestral  to the ancient Blemmyes or modern Bedja who are Cushitic speaking nomadic pastoralists who lived in skin tents.

They were matrilineal, had camels and innumerable cattle and sheep.

The word Bedja is the same as  Bediyat or Bedawi  from which  comes  the word  Bedouin. It was a name of  the tribes of the eastern desert of Sudan in the time of the Arab writers especially.

Modern Bedja, Afar and other Cushites occupy the same areas near the Red Sea as the peoples anciently called Trogodytes.

They were a people mentioned by Agatharcides, Diodorus and Strabo.

The country of the Beja was called, according to a Saidi (southern Egyptian Arab) lexicon, mentioned by Quatremere in the second volume of his Memoires sur l”Egypte, Ta-aurek.

This was most probably the area of Twarek, mentioned in the time of Amenophis as a region which had been invaded by an Egyptian army.

And the countries of the Trogodytes were the same as those called Berber by the Romans. These were people who, according to Agatharcides and others, called their mothers, sheep and their fathers, rams.

They were circumcised and drank milk mixed with blood.

They buried their dead under erected mounds of stones capped with the horns of their cattle.

They often made their homes among rocks or ravines or grottos as do some of the present day Afar tribes.

It has been surmised that their name came to be a punning homophone for a cave-dweller or one who dwells under ground or in grottos because the word came to be spelled with an ‘l’ as Troglodyte. Trogle in Greek means hole.

Trogodytes occupied the coastal regions along both sides of the Red Sea.

In their country was the land of Punt, now identified as the modern-day Mersa Gawasis, a port town in the horn of Africa.

There was another Punt (called Opone) further south around the time of the Christian era and Mogadishu was said to have been called the ‘Pearl of the land of Punt’.

According to Strabo, a major group of Trogodytes lived in the African side of the Red Sea(for Trogodytes inhabited both sides) were called Erembi.

The ancient Trogodyte practices recall those of the present day Cushites and Nilo-Saharan speakers especially and to a certain extent the Libyans as the ancient Libyans who were said to have dwelled in carvens and man-made grottos.

Bongo, Moro and Zande erect mounds of stones and Nandi laugh at their funerals. Often, these people place cattle horns on the tombs as do some of the Cushites.

It is Interesting  that  when  the Ik, who now inhabit Uganda, were first written about by Colin Turnbull, linguists could only find a relationship of their dialect to the Middle Kingdom Egyptian dialect.

A. Arkell mentioned also colonies of potters who speak a Nilo-Saharan dialect and are called Tama living in the North of Sudan traditionally said to be from Bir Natrun a place which is now desert.

The designs on their pottery ‘imitate’ those of the C-Group pottery.

As stated before, the huts of the Nilo-Saharan speakers in Ethiopia have been noted to bear resemblance to those on a Meroitic vase.

Among the remaining grotto dwellers further west are the Nilo-Saharan Tibbu/Teda.

Pliny, Strabo and others refer to Trogodytes of Tassili in Algeria and in the Anti-Atlas range in Morocco.

The Pharusii (Iforus) are the Libyans whom Strabo says lived in caves or grottoes and were in this region. They are mentioned in the south of Morocco by Salluste.