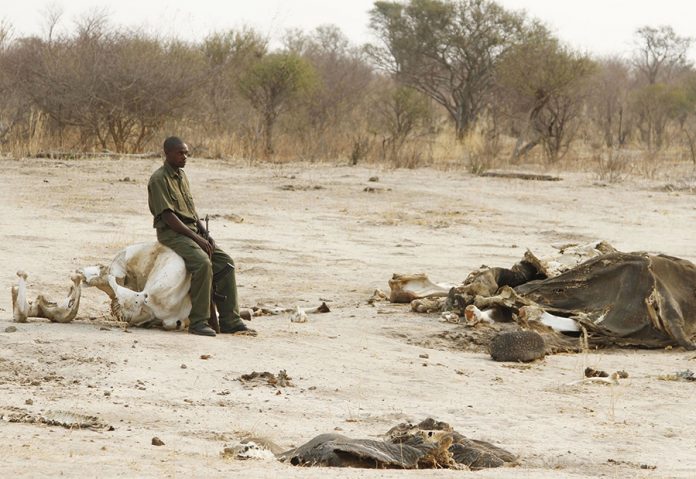 IS it possible to fathom what our people went through when they were subjected to dynamite charges in the caves during their liberation struggle?

Can you imagine the trauma they went through, with their babies and children, the unborn still ensconcing in their mother’s wombs.

Their crime was to hold on to their God-given heritage, their land.

Our people had challenged the whiteman and refused to be enslaved.

The whiteman had weapons of mass destruction.

They were mowed down by the Maxim gun.

What greater violation of human rights can there be on this earth?

And yet these utterly brutal robbers, after we had fought and defeated them, had the temerity to talk of human rights considerations for whites in our repossession of our land which whites seized with such inhumanity and criminality.

How did survivors of such horrific massacres manage to carry on – families having been wiped out, some irreparably injured and handicapped.

These were crimes against humanity, against us, Zimbabweans. And at Nyadzonia, the trail of carnage still indicts the British.

The late Cde Alexander ‘Gora’ Kanengoni wrote what he witnessed that fateful morning of August 9 1976.

Said Cde Kanengoni: “And then at last, we were confronted with an endless sea of dead bodies stretching in all directions and I shook my head in disbelief.

There were corpses here, corpses there and corpses everywhere.

There were corpses strewn all over the smouldering logs and others burnt beyond recognition.

And a short distance away to the east, the Nyadzonia River writhed and cried, heaving under the weight of hundreds of bloated, floating bodies. And then there were the injured, hundreds of them; writhing and crying like the river.

Others had their limbs crushed by the rumbling steel-belted wheels of the pursuing armoured vehicles.”

A massacre of such magnitude, so ruthless, because whites wanted to hold on to what they stole from us?

The massacres at Nyadzonia, Chimoio, Mkushi, Freedom Camp, Mboroma, Kamungoma and many other places are on record.

There is a furore always rustled up by Western governments and their NGOs when animals die in our game parks.

Where is their furore against the British who committed heinous crimes against Zimbabweans?

Why should NGOs and Western governments shed crocodile tears for animals in our game parks when they were and are at peace with the murder of thousands of Zimbabweans?

The land cries, the people cry – the whiteman must compensate the innocent people he massacred; a nation whose only crime was that they possess a beautiful and rich land.

In 1896 Cecil John Rhodes wrote: “Dear McDonald, Inyanga is much finer than you described.

I find a good many farms are becoming occupied.

Who really needs to be compensated?

Nyanga is not land somewhere in Nolliput (the land of no people).

Rhodes, just one Briton, robbed people of a land so lush, fertile, so beautiful, a vital means of livelihood!

In 1893, Rhodes also seized 38 000 acres of beautiful Matobo, a sacred ancestral land of our people.

Matabele herders were summarily dismissed from their pastures as Rhodes coveted the land and took it.

There were people there, living their lives, marrying and giving in marriage, communicating with Mwari; people with hearts and souls which matter and mean something to Musikavanhu, but everything was hacked to pieces.

Nothing mattered but the greed of the whiteman.

In the aftermath of Leander Starr Jameson’s war of aggression against the Ndebele of 1893, the Ndebele lost virtually all their cattle – 280 000 herd.

Has anyone thought of compensating them?

Matabele men could no longer marry according to custom as they no longer had cattle for bride price.

Their cattle were distributed among the whitemen for ranching and draught purposes and the British South African Company (BSAC) got half of the loot.

From these cattle, the land robbers built a flourishing exclusive white economy, but at the end of the day, they claim that on top of this we, blacks, must compensate them.

This does not make sense except in the British mindset which is so racially skewed.

What shall we tell our children?

That the British came and took everything from us and, for over a century, looted billions from our land.

That we fought and defeated them but now they clamour to be compensated for them to let go of what is ours?

It is us, the people of Zimbabwe, who are aggrieved, from whom the British took land, cattle, mines and our labour for their exclusive white benefit.