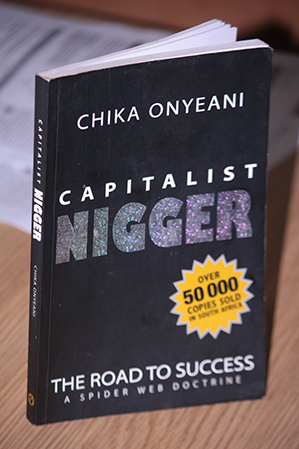 IF there is a book that every Zimbabwean, every African and every black person should read, it is Chika Onyeani’s Capitalist Nigger.
At a time when Africans and the black people elsewhere in the world, especially the United States, are grappling with a myriad of challenges to do with self-assertion, Capitalist Nigger will provide some incisive insights.
According to Onyeani, as a race, failure is never an option, knowledge is power and we must be ruthless in pursuit of excellence.
“I decided to write Capitalist Nigger also as a doctrine of making money and creating wealth. I am not ashamed to say that I am also purely motivated by the same greed that motivates Caucasians with ‘killer-instincts’ and ‘devil-may-care’ attitude convictions,” writes the author.
The author refuses to grab the victim-card.
“I see myself as an economic warrior for my people and not a victim. As a predator, and not victim, I have decided to confront the truth of my misfortune and when I look in the mirror I see the culprit standing right in front of me – it is me.”
The book would do many a Zimbabwean good.
While we grapple with a myriad of challenges on the economic front, there are opportunities in all the sectors opened to all persons, persons who were previously marginalised.
Last year, actual foreign investment amounted to US$400 million with total interest in the country amounting to US$3 billion.
If foreigners can see the good in our country and on the continent, exploit its potential, why can we not do the same? is one of the many arguments in this explosive, no-holds-barred book.
“You want to succeed in creating wealth, join Wall Street. Don’t make excuses that blacks don’t know how to invest their money. Go after the Caucasians. Use their guilt to your advantage,” says the writer.
He urges for the same ruthlessness that characterises whites.
“We are talking of over 36 million African men and women who were rounded up by a handful of Caucasians…Am I supposed to take delight in telling this story? which we as a people have done nothing to stop from happening again and which is in fact happening at a greater frightening speed than in the 17th Century,” says Onyeani.
The writer lambasts the consumeristic nature of black people.
“Let us not delude ourselves: Our work ethics leave a lot to be desired. We prefer the comfort of guaranteed jobs to the adventure of deciding our own future. We prefer others to establish the company so that we can come in and cry racism when they refuse to hire us. Why can’t we establish the company, let others come in and cry racism for us not hiring them?”
According to the writer, Africans will only become successful once they are brutally honest with themselves.
“A Capitalist nigger…must be fiercely ruthless with himself if he is to abandon the baggage that we, as Africans, carry all our lives to our graves; the notion that somebody owes us something. Continental Africans think the world owes them something. We whine and whine about how the Europeans looted our natural resources. Yes they did, so what…If you need something, be a man. Go and get it. Don’t start whining for somebody to do it for you or get it for you,” writes Onyeani.
This is a book that should inspire all the downtrodden lacking belief in themselves.
Reading the book, one cannot help but observe that countries like Zimbabwe have already made significant strides in empowering the black man and woman.
Stolen land has been reclaimed and given to its rightful owners.
Natural resources are now controlled by the indigenes, economic empowerment programmes are in place seeking financial independence for the masses.
“Building your success based on what others are doing for you, is just like building a castle in the sky…Those who consider themselves successful should ask themselves what would happen if they are out of that job for more than two months.”
Capitalist Nigger is a must read for all black people.