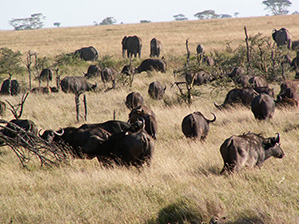 THE dryness of vegetation and some river sources caused by the El Nino-induced drought has forced the Zimbabwe Parks and Wildlife Management Authority to embark on a de-stocking exercise.
Wild animals in some parks estate are dying as a result of lack of pastures and water.
The de-stocking programme is perhaps a great move to save the drought stricken animals.
With most of the country’s tourism heavily reliant on flora and fauna, there is need to always safeguard wild animals, which are the major drawcards of tourists.
The de-stocking exercise will involve the sale of excess wild animals to ensure that pastures and water resources do not get exhausted before the onset of the next rain season.
Relocation of animals to various places, where there are resources to sustain them is also expected to save the animal population.
In a statement, Zimbabwe Parks and Wildlife Management Authority said: “In light of the drought that was induced by the El-Nino phenomenon, ZimParks intends to destock its parks estates selling some of the wildlife.
“The authority is therefore inviting members of the public with the capacity to acquire and manage wildlife to submit their Expression of Interest (EOI).
“Intending Zimbabwean participants must provide the following information about the habitat which they intend to put the acquired animals: name and address of property, description of current land use, intended use for the acquired animals and existing infrastructure (such as) fences, water availability, roads, fireguards, protection/law enforcement capacity and management.”
Hippopotamuses, buffaloes, elephants, lions, baboons and hyenas are some of the animals at risk from the unavailability of forage crops or pastures and water.
Some of these animals are earmarked to be sold to neighbouring countries.
Zimbabwe’s animal population has grown over the years, especially after the ban of trophy hunting by some Western nations.
For example, the US state Senate voted to ban the importation of five types of exotic animals — either dead or alive — under a Bill known as Cecil’s Law.
Cecil was Zimbabwe’s 13-year-old lion killed by American hunter Walter Palmer last year.
Prompted by that incident, lawmakers called for banning of the possession, sale or transportation of African lions, elephants, leopards and two species of rhinoceros that are known as the ‘big five African species’.
Anyone violating the ban can be charged with a felony, which carries a maximum penalty of two years in prison and a US$10 000 fine.
As a result the figure of tourists coming into the country for hunting has declined.
Hunts were one of the major ways of controlling the numbers of the country’s wild animals.
Hunters have argued that hunting is an act of conservation and that both animals and local people benefit from the hobby.
Safari operators insist that conservancies that have had any sort of financial benefit from wildlife are those that host hunters.
Big game hunters also argue that killing helps a species by removing older animals from the population.
However, others insist that animals are more valuable alive.
An individual animal, particularly if it’s a member of the more iconic species, is worth far more to a country alive over the course of its lifetime than dead, opine eco-tourism stakeholders.
According to pundits, allowing the animal population to decline through starvation will severely affect tourism.
The majority of tourists who visit Africa do so to see the wildlife and if there is depletion of wildlife a huge chunk of tourism income will be lost contends the experts.
“It’s only in Africa where the planet’s largest land mammal, the African elephant, still roams; where the tallest land mammal, the giraffe, still lumbers; where the fastest land mammal, the cheetah, still sprints and where most of the world’s great apes live, including the eastern gorilla (the mountain gorilla is probably the best known subspecies of this group), western gorilla, chimpanzee and bonobo,” says Philip Muruthi, senior director of conservation science for the African Wildlife Foundation.