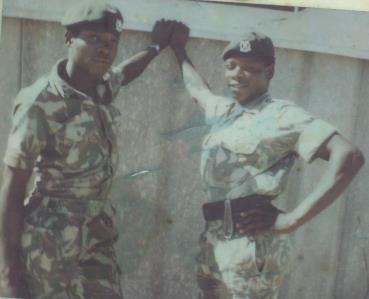 ZIMBABWE’S independence was achieved after a protracted liberation struggle.
Thousands paid the ultimate price for liberation, they lost their lives.
The unbearable yoke of British imperialism forced sons and daughters of the soil to cross the borders going to Mozambique, Zambia and Botswana to receive military training.
The war was not easy, the freedom fighters lacked basic resources and hunger was not unusual, but the difficulties did not deter the fighters.
At the peak of the liberation struggle the brutality of Rhodesians increased and hundreds of people were massacred, unarmed people, children and defenseless women were not spared.
Captured freedom fighters and villagers were brutally killed and buried in mine shafts.
It is now 34 years since attainment of independence and the decent burial of fallen sons and daughters of the soil is far from complete, said Cde George Rutanhire, the national chairman, of the Fallen Heroes Trust.
The trust is tasked with according decent burial to all those that perished during the struggle. And the unearthing of mass graves where Rhodesians used to bury the people that they murdered has seen the work of the trust increasing.
“The work is far from completion as we have identified individual and mass graves in all provinces,” said Cde Rutanhire.
“For instance, we exhumed 848 bodies in Mashonaland Central at Chibondo and Mount Darwin air strip and there are more shafts with bodies of murdered comrades.”
Cde Rutanhire who is a former Deputy Minister of Youth, Sports and Recreation and currently member of the ZANU PF Politburo, said reburials must be prioritised.
“It is important for the nation to prioritise the reburial of those who died at the hands of the enemy for us to achieve independence,” he said.
“Thousands died and only a few were accorded decent burial.
“Decent burials would ensure that the story of the bravery of the participants in the struggle will not be forgotten.”
Zimbabweans have attributed the noise made by Rhodesians regarding land reclamation to greediness and a desire to continue exploiting our resources for their benefit. Analysts, however, say while the above may be true, there is more to the noise and fretting over repossessed land.
The noise, they say, is raw fear, fear of atrocities that would be discovered.
Many comrades, brothers and sisters, mothers and fathers vanished during the liberation struggle.
Many thought independence would lead us to many of those that vanished into thin air, but there was no such luck. And it is the Land Reform Programme that led to their discovery.
In the very farms that they occupied, they buried thousands of our brethren.
Indeed the mass graves in Chibondo in Mt Darwin and the Butcher in Rusape are just, but a tip of the iceberg. The numbers in these graves and determination to stay on these farms by Rhodesians indicate that more are buried elsewhere.
It is not just the land they desired, but they desperately needed to keep the lid on this darkest secret they never revealed even when we extended them the olive branch.
But the lid has been blown sky high and the bones are tumbling out.
A travesty and great shame it will be if we do not pay attention and accord these children of Mbuya Nehanda a befitting burial.