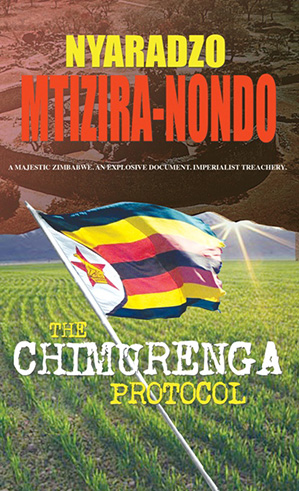 THE novel, The Chimurenga Protocol, is predicated on the wings of history.
In this instalment, we shall blend style, character and theme for a unique logic: that they are inseparable.
This novel is divided into three parts, each representing the successive phases of Chimurenga One, Two and Three, respectively.
Part One deals with ‘The First Chimurenga’.
The overall spatial setting of Part One is Zimbabwe after the colonial invasion by the British Pioneer Column, but the action vacillates between Bulawayo and Port Salisbury (now Harare).
The drama in Part One is enacted by four archetypal characters: the anonymous Zimbabwean freedom fighter, Lord Carrington (the translator from Australia), Mason (the imperialist agent) and Cummins (the colonial administrator of Mashonaland).
These characters represent competing consciences and meta-narratives. The hero of this Part is the young freedom fighter, who has just been captured in Bulawayo and is undergoing routine interrogation and torture.
His anonymity is deliberate for he represents many such freedom fighters of the First, Second, Third and Umpteenth Chimurengas.
Our first impression of this character is that of a towering metaphysical force that resists all forms of intimidation in defence of what belongs to him.
His purpose is set and unmistakable: “Pamberi neChimurenga” (19).
These words are uttered with an authority that unsettles Mason for all his experience with sadism:
“Through the slits of his swollen eyes, the prisoner looked at Mason with mocking disdain” (21); the kind of disdain befitting any usurper.
And Mason wonders: “what is it about this man that frightens me.”
This is the same question Smith would ask in awe, shocked that his 1 000 had been reduced to a mere 15; the same question the British whisper to themselves to date about enigmatic Zimbabweans.
Zimbabweans are a different breed of Africans.
They will not be cowed into submission by any imperialists; and will never trade their heritage for anything else.
Yes, the young freedom fighter is an embodiment of the Great Spirit of Madzimbabwe.
Indeed Zimbabwe is a metaphysical reality which mocks any attempt at appropriation.
And Mason and his crew represent the predators, but who can only rape the skin of our great nation, but never traverse its soul.
Its soul belongs to those born out of its womb, those who partake of its sensibility.
The sober reality of the inviolability of Zimbabwe is what Mason comes face to face with when he reaches Salisbury.
Cummins, the chief administrator for Mashonaland, has been schooled by hands-on experience.
He has eye-witnessed the rising death toll of settlers despite their efforts to subdue the 1896/7 people’s uprisings.
The fate of Allan Wilson and his crew at the hands of Lobengula’s warriors is a recurring spectacle which constantly reminds these adventurers of the inevitable.
Cummins represents the white men’s last voice of conscience and sobriety, a voice which could have saved many a settler if only they had listened to it.
He observes with stunning accuracy:
“We face a huge battle for the hearts and minds of the indigenous people.
“They have not taken kindly to our invasion of their land which is their livelihood.
“They have an extra-ordinary bond with their land and we ignore the strength of this umbilical cord at our peril.
“My worst fear is that this Chimurenga is the portent of a bigger battle which will lose inevitably.” (34).
Prophetic, isn’t it?
Nothing could be more revealing than this.
Cummins observes right.
Zimbabwe to Zimbabweans is more than minerals, and more than rich agricultural soils.
It is an organic and spiritual matter.
We worship it.
We cherish it.
In its bowels are generations and generations of our long gone ancestors.
For these reasons and more, Zimbabweans are ready to protect it with their lives against any form of defilement.
This is what Cummins now knows, but who has ears for his wise counsel?
Certainly not Mason.
Mason is a true embodiment of the diabolical and unfeeling architecture of British Imperialism.
As he says:
“I make no apologies for my mission as an imperialist, may the greed of the Empire devour all that lies in its path (41)
“There is no place for niceties such as rule of law (or reason) for the local subjects.
“We will dispense justice swiftly and we will not waste our principles of justice on the local populace.
“In addition to our roles as judge and jury, we will wear the executioner’s cloak (as well).”
So blind is Mason’s brutal passion for conquest that it leavesno single space for reason.
And yet events continue is mock Mason’s consuming bigotry.
First, the young freedom fighter has outwitted Mason’s colonial guards and escaped execution.
Second, although they have captured the bodies of Mbuya Nehanda and Sekuru Kaguvi, they cannot cage the havoc their spirits wreak in the psyches of the indigenous peoples.
And the shadow of the young freedom fighter keeps dogging his psyche like the sword of Damocles, reminding him persistently, that he is nothing, but a settler forever and that he would continue to live on borrowed space and borrowed time for eternity should he and all those he stands for continue to dare the unbending spirit of African nationalism.
There are several lessons one learns from Part One of this great novel.
The first is that the war which the Whiteman brought to Africa in their bid to expand the British Empire was a war that they were doomed to lose from the start.
They would lose it at any cost because they never sought to understand the African reality they intended to conquer in the first place, let alone the organic and symbiotic relationship between the people and their land.
They were blinded by rabid gluttony for tangible goods for their industries.
And they cared not about the bigger picture.
Africa is one big intangible.
Its language can only be understood by its children.
You cannot conquer a metaphysical space.