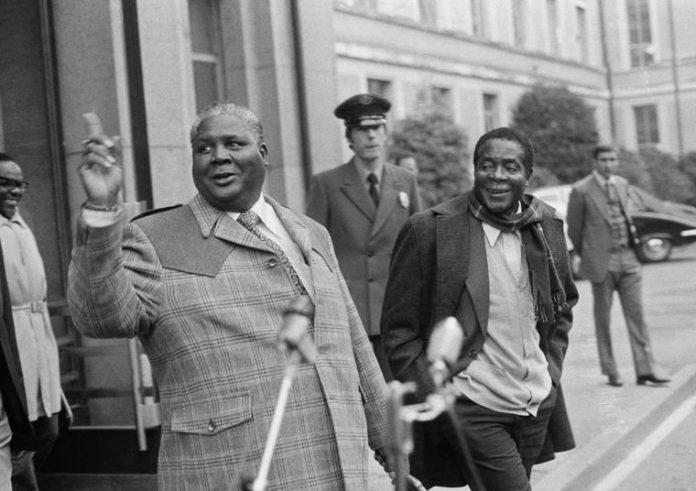 THE occasion on which Cde Joshua Nkomo showed his acknowledgement of Cde Robert Mugabe’s future role was most probably the strangest experience the author of this narration had during the struggle.

It originated as a request by some Karol regional traditionalists for Cde Joshua Nkomo to get cleansed of what they termed blood of Shona people killed by Ndebele warriors during the days of King Mzilikazi and King Lobengula.

They said should that be done, Cde Joshua Nkomo would be acceptable as Zimbabwe’s national leader.

Cde Nkomo accordingly looked for an appropriate Shona traditional medicine man (n’anga) and found one at what was then called ‘Skyline Hotel’ at what were the African accommodation section near the Hunyani River Bridge, seven miles along the Harare-Masvingo Highway.

He instructed Cde Joshua Nkomo to go and look for a bull and a cock, a brand new metal dish, a brand new kitchen knife, a brand new axe, a packet of coarse salt and a large pinch of snuff and bring them to him.

Cde Joshua Nkomo did and one day in the very early hours of the morning in late January 1962, few ZAPU loyalists and youths gathered at the Skyline Hotel compound where the traditional medicine man lived.

Cde Joshua Nkomo had been told to come.

Present at that solemn occasion were comrades Aaron Jirira, Josia Chinamano, Mark Nziramasanga, Willie Musarurwa, Robert Mugabe, Chenjerai Huzvi (who was Jirira’s nephew and was at that time living at Jirira’s house as was Nkomo), Patrick Kombayi (who had been responsible for bringing the bull from Chivhu, (then Enkeldoorn), Lovemore Gumbo, William Mukarati as well as a group of youths, especially those living in Highfield.

Cde Nkomo was duly ordered to use the axe to kill the bull, and he did.

He was told to cut its throat with the knife, but appeared uncomfortable bending and he gave the knife to Cde Mugabe who cut the animals’ throat.

The white enamel dish was given to Cde Nkomo to receive the oozing blood.

Again he appeared uncomfortable bending and Cde Mugabe took the basin and received the blood.

The cock was brought and Cde Nkomo cut off its head while Cde Mugabe was holding the bird’s body.

The cock’s blood was mixed by the man whose name was, I strongly believe, Chiriseri Nyandoro, with that of the bull by the use of a porcupine’s quill.

The second time, he called on Changamire and used the same words.

But whether or not the charm he put in the mixed blood was the same or different, the writer of this article cannot say.

The third time, he called on Mambo and said exactly the same prayer.

He then told Cde Nkomo to open his mouth.

Cde Nkomo did and using the porcupine quill, he dropped a little of the doctored blood on his tongue and told Cde Nkomo to say the same words that he had just been saying to first Munhumutapa, then to Changamire and lastly to Mambo.

Cde Nkomo moved a step backwards and said in English: “But I can’t speak Shona; I will ask Robert to speak on my behalf.”

Cde Mugabe moved a step forward and took over to complete that traditional rite.

After Cde Mugabe, whose part was the last ceremony, the bull’s carcass was cut up and roasted and consumed.

It was not clear whether Cde Nkomo was asking Cde Mugabe as his personal assistant, or as a symbolic gesture that he preferred him as his successor in the political African nationalist hierarchy. To the author of this article, one would have thought that such a traditionally important ceremony should have been attended by the then ZAPU deputy president, Dr Tichafa Parirenyatwa, who, however, was absent.

The author of the article noticed much surprise on the faces of all those who attended the rite and later heard them say Cde Nkomo had in effect given his own power to Cde Mugabe and that Cde Mugabe would eventually rule this country.

That was a very heated topic, particularly among a group comprising comrades Musarurwa, Nziramasanga, Herbert Munangatire and myself. Munangatire always emphatically stated: “Whether we like it or not, Robert Mugabe is destined to rule this country.”

Much reservation about how Cde Nkomo had most unexpectedly passed the final ritual responsibility to Cde Mugabe was expressed.

But to me, an unapologetic Cde Nkomo loyalist, his decision to ask Cde Mugabe to take over such an important rite was practical expression of deep, personal confidence, if not faith, in the leadership of a man in whom he had expressed some doubt.