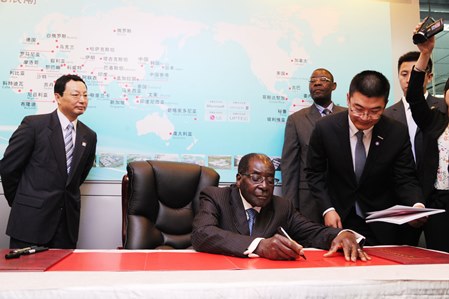 FINANCE and Economic Development Minister Patrick Chinamasa this week unpacked vast opportunities unlocked by President Robert Mugabe’s recent visit to China to captains of industry, diplomats and the investing public.
The visit which saw President Mugabe and his delegation sign nine mega deals has generated a lot of interest with many not understanding what the deals mean for Zimbabwe.
The breakfast meeting organised by Zimbabwe Newspapers themed ‘Historic Sino-Zim Agreements-What’s Next?’ was another effort to make the public understand opportunities that the country stands to benefit following the signing of the deals.
This follows other attempts by Minister Chinamasa who took parliamentarians through these deals and ZANU PF provincial committee members in Bulawayo last week.
The Harare International Conference Centre main auditorium was packed with captains of industry; diplomats including those from the West, United States and the general public.
They had so many questions that needed answers.
As the meeting began one could see that perceptions created by the West had almost succeeded in derailing progress, but Minister Chinamasa who chided all these critics was so convincing that at the end no one had a hanging question.
To those who questioned what the country got from the Chinese, Minister Chinamasa had this to say;“What we have been able to achieve was serious engagement with the Chinese authorities and we got a commitment from the highest authority to fund bankable and viable projects,” said Chinamasa.
“China does not give budgetary support to any country.
“It is interested in giving infrastructural support.
“They are prepared to fund bankable projects.”
On why Zimbabwe had to go to China rather than re-engage the West and America, Minister Chinamasa responded:
“In the last 30 years, China is now number two as one of the growing economies in the world from position 120,” said Chinamasa. “It has overtaken countries like Japan and Germany and it will soon overtake the United States.
“If you want to borrow serious money, you go to China.
“We will engage them because; they know how to do their work.
“We have to understand their systems.”
Many may take the all-weather friend as a cliché, but the Chinese stood by Zimbabwe throughout the liberation struggle.
The military strategy used by ZANLA forces, the military training and equipment, were all from the Chinese.
When the war ended, the new Zimbabwe seemed to have forgotten about the Chinese, but they never complained.
And two decades later Zimbabwe got another disappointment from London.
And what did we do?
We went back to the Chinese and they received the country with open arms.The multi-million infrastructure deals Zimbabwe signed with China will lay the bedrock for accelerated investment and economic growth and reduction in the cost of doing business.
Zimbabwe will be able to export surplus power in the next three to four years following the deals signed with Chinese institutions.
Power generation deals signed include the US$2 billion integrated Gwayi energy water projects that will add 600MW into the national grid.
Another power generation deal is the commissioning of feasibility studies into coal exploration and a thermal power station in Sibungwe Binga, another 600MW coming into the national grid.
China Exim Bank also bankrolled US$320 million for the Kariba South Expansion, which will add 300MW to the national grid while the US$1, 2 billion Hwange thermal unit seven and eight project will bring an additional 600MW to the pool.
Government also secured funding commitments for procurement of locomotives for the National Railways of Zimbabwe, in what will help cut the cost of bulk freight which is pushing up the cost of production.
“The problem with this country is we allowed the railway to go to the dogs and roads are carrying heavy loads they should not carry,” explained Chinamasa.
Heavy loads such as coal and fertiliser should go to the rail, which should reduce the cost of doing business.”
Other key infrastructure set to benefit from the commitment include feasibility studies for the dualisation of roads; Harare-Nyamapanda, Harare-Beitbridge and Harare-Chirundu and the digitalisation of Zimbabwe Broadcasting, the expansion of the TelOne’s fibre optic network and expanding Net-One’s network base coverage.
The Chinese government also agreed to support irrigation projects in what is expected to open up 20 000 hectares of small-scale farmers irrigated land under the Osbourne Dam and Dande irrigation scheme.
Loan facilities amounting to US$150 million were also agreed with the Chinese firms for social infrastructure in the resettled areas under the Land Reform Programme and other areas.
Surprisingly some still think all these deals are a pie in the sky.