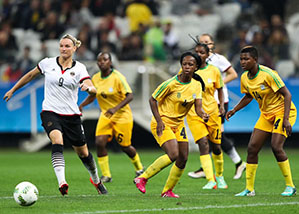 EDITOR – ALTHOUGH the Mighty Warriors recently lost by 6-1 to an experienced Germany, they played their hearts out representing their Nation.
Playing a team that has won three bronze medals in the previous respective Olympics and several World Cup titles was a mammoth task, but our Mighty Warriors did well.
Germany is known to punish weak teams.
Ghana was punished 11-0 by Germany.
Ivory Coast was crushed 10-0 by Germany in last year’s World Cup, while Argentina was also hammered 11-0 by Germany in the 2007 World Cup
However, the Mighty Warriors fought tooth and nail and even scored against the so-called ‘Mighty Germany’.
It was just unfortunate the team was playing a well-prepared Germany, which had prepared physically, psychologically and tactically.
Our team has great players like Kuda Bhasopo, Emmaculate Msipa, Rudo Neshamba and Talent Mandaza.
I am sure they can defy all odds and win the next two matches to qualify for the second round.
To coach Shadreck Mlauzi, I say study the opponent’s play during the game and make the necessary changes for your team to win.
Yes, we are yet to play Canada and Australia and I would like to say let us come together and continue supporting Zimbabwe at the Olympics; not just the Mighty Warriors, but the entire Zim entourage in Brazil.
Thumbs-up to Brazilian soccer fans on the terraces who supported our Mighty Warriors all the way. Perhaps we must emulate them because playing at the Olympics is an achievement we must celebrate as Zimbabweans.
Go Mighty Warriors go!
Unesi Phiri,
Harare