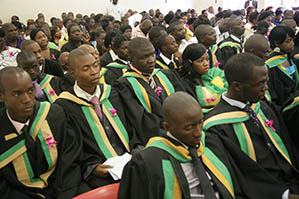 ZIMBABWEAN writers, home and abroad, are still reeling from the shock of Dr Vimbai Gukwe Chivaura’s untimely death.
While many writers applaud the provincial hero status accorded to this man, who was a human library (as they passionately called him), some feel it was wrong and unfair for the late Dr Chivaura to be given a Christian burial; taking him to a chapel, especially as he strongly believed in African traditional religion.
It would have been befitting if his burial had been accompanied by African drumming and Mbira playing.
But there is a general feeling that there should be a way to remember him, to keep his spirit alive.
This could be through a postgraduate scholarship for English students, annual festivals held in his honour or at least naming one of the University of Zimbabwe’s (UZ’s) lecture theatres after him.
Who knows?
It has happened elsewhere, it can also happen here.
He was such a great man, a hero and pan-African giant who defended his beliefs with a passion.
Below are some of the leading writers who have paid tribute to the late Dr Chivaura:
Tendai Humbasha Maduwa (Internationally celebrated award-winning Poet; Actor; TV presenter): “Dr Vimbai Gukwe Chivaura was a literary icon who made strides in developing the literary industry in Zimbabwe and internationally.
“His wisdom in literature should not die with him.
“I challenge the UZ and other local gate keepers to locate one building which they can name after him and we also need an annual life commemoration to celebrate his life.
“If South Africa did it on Miriam Makeba; why can’t we honour this literary icon?”

Shingai Rukwata Ndoro (Sunday Mail religion columnist): “The news about the sad and painful loss of Dr Vimbai Gukwe Chivaura was hard to receive.
“Here was a man who was forthright about what it means to be an African in a sea of confusion caused by foreign cultural and religious missionarism.
“Here was a man who made it possible for people to appreciate enlightened education for continuous learning, research and service to others.
“Here was a man who keenly advanced the human agency of Africans as active citizens without being apologetic.
“For 15 years I have known and closely interacted with Dr Chivaura.
“It was always a pleasure to read his articles, listen to him and be reminded about the untiring responsibility of all Africans to seek and promote knowledge that raises the self-knowledge and confidence of Africans on the continent and in the Diaspora.
“With a very confident personality, he would disarm many missionaries of foreign cultures and religions among us with well-thought out deconstruction of knowledge whose narrative was framed and centred in the West.
“Here was a man who pierced through the conventional Western knowledge to find the pearls for Africans and uncover many distortions.
“With his death, all these pursuits will be poorer because he was an iconic and towering figure.
“His death now provides us with a challenge and encouragement that we should be willing to be foot soldiers for the liberation, freedom and well-being of an African whose human agency should not wallow in the deep sea of ignorance and falsehoods, distortions and lies of cultural and religious colonialism sustained by the inferiority complex of the local hands.”
David Mungoshi, writer and former UZ lecturer, wrote the following poems
Now that the well is dry
(Thinking of Dr Vimbai Gukwe Chivaura)
The water was quiet and unruffled:
Though intemperate winds blew on it
Ne’er once did it ever really stir
And we got so used to its pervasive presence
In line with global trends everywhere
We took notice only when loud waters bubbled
Like wayward children we scoffed
When delectable words of wisdom
Wafted like therapeutic mist out of Wisdom Well
But now that the well is empty and dry
Our deprivation begins in earnest
And soon, very soon, nostalgia will whip us
One and all till we learn the bitter lesson:
That second chances belong to storybooks only;
Now that this veritable repository of true wisdom
Is in other dimensions our dilemma cries out
Who amongst us shall quench our thirst
Now that the water in the well has dried