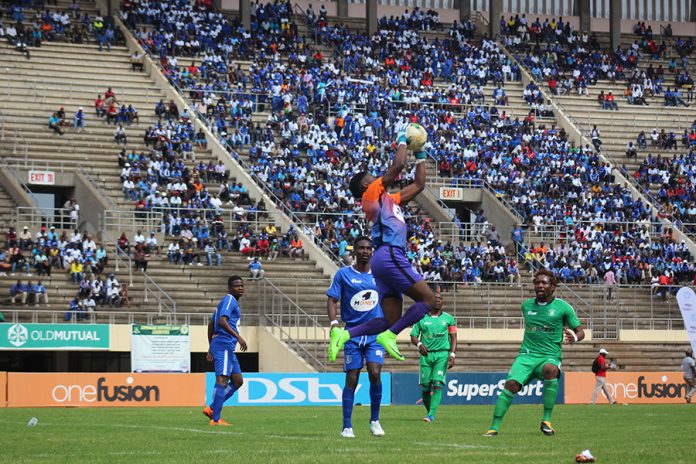 ONE of the country’s biggest and oldest football clubs, Dynamos, is in a quandary.
The 2018 term has begun horribly for the club which is yet to record a victory in the Premier Soccer League.
And a loss to nemesis Highlanders on Monday at the favourite hunting ground, Rufaro Stadium, has sent diehard fans into a tailspin.
Now the fans are baying for blood; specifically for that of club president, Kenny Mubaiwa.
Mubaiwa is being accused of poor administration which has been cited as the major problem behind the country’s most successful football club’s latest misery.
The fans blame the executive for failing to prioritise pertinent issues, chief of which is failing to secure players.
Several players left DeMbare during the off-season after the team failed to secure their services by failing to pay them.
Stars who include Godknows Murwira and Tichaona Chipunza, their best player, left for Ngezi Platinum Stars.
Cameroonian import and goal poacher Christian Epoupa has been frustrated by the club which is failing to pay him his dues and thus has not been featuring in the club’s games.
Chipunza was Dynamos’ best player while Epoupa was on the Soccer Stars calendar and was the club’s top goal scorer last season.
Skipper Ocean Mushure has, on a number of occasions, withdrawn his services citing failure by the club to pay him his sign on fees.
Lloyd Mutasa’s fringe players, who dazzled during the Commander ZNA Charities Shield, are failing to deliver in the PSL.
The fans are not yet ready to blame the coach, arguing the dismal performance is a result of an executive which has forgotten its mandate.
Fans still believe in Mutasa’s acumen as the former Tanganda midfielder is credited for scouting the four-time (2011-2014) champions squad that was later coached by Calisto Pasuwa.
The next game is a must win if DeMbare is to stead its ship.
The Glamour Boys travel to the resort town of Kariba to face fellow strugglers ZPC Kariba at Nyamhunga Stadium.
The hosts are failing to establish themselves in the league this season as they have neither scored nor registered a point.
Dynamos may capitalise on the hosts’ poor form and register their first league victory. Dynamos’ four matches have been a tale of poor defending.
The first match was a 0-1 loss to Chicken Inn then a 3-all draw with Shabanie Mine.
The team also lost to Ngezi Platinum Stars.
The match against Shabanie exposed the DeMbare rearguard as at one time the Harare giants were leading 3-0.
The defence seem not to be able to deal with crosses and aerial balls.
At Baobab Stadium in Mhondoro-Ngezi, unbeaten Ngezi Platinum Stars face-off with Chicken Inn in a potential thriller.
Both teams, who have made their intentions clear this season, trade blows in an epic clash.
Stakes will be high in the match, with the winner guaranteed pole position on the log.
Ngezi Platinum Stars have a 100 percent record. They have not conceded a goal in all their matches and are the favourites to win the match.
However, Chicken Inn have not been bad travellers and count on experience in their team.
The 2015 league champions have 10 points in four matches and are still unbeaten. They have conceded one goal, meaning they have a solid defence.
Elsewhere, Highlanders host newboys Nichrut at Barbourfields Stadium while Bulawayo City welcome Black Rhinos.
Tendai Chikuni faces his former paymasters FC Platinum as the airmen host the defending champions at Ascot Stadium.
The Zvishavane miners are on track to defend their hard-won title that came after six years in the premiership. The Norman Mapeza-coached side have 10 points from four matches.
They won their first match as walkover against ZPC Kariba before they dismissed Yadah 2-0 at Mandava.
The third match was a goalless draw against CAPS United in Harare before securing three points against Bulawayo City on Sunday. FC Platinum are yet to concede a goal in four outings.
CAPS United play host to Herentals College in Harare derby slated for the National Sports Stadium. The college boys registered their first victory against ZPC Kariba. They have four points from four matches.
Shabanie Mine host returnees Mutare City Rovers at Mandava Stadium while Yadah host Taurai Mangwiro’s Triangle.
Harare City welcome Bulawayo Chiefs at Rufaro while Bulawayo City play host to Black Rhinos to wind up Week Five action.