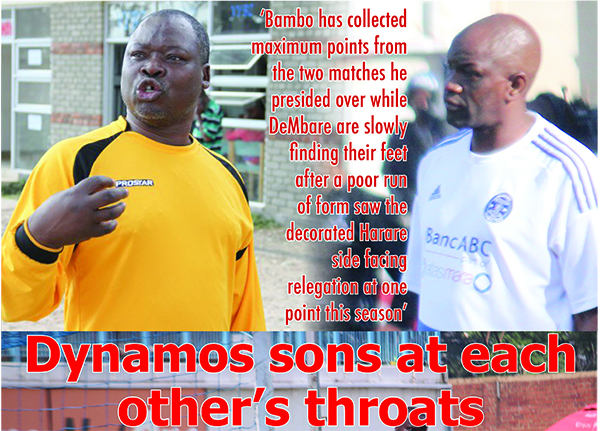 THE Moses ‘Bambo’ Chunga roller-coaster comes to Rufaro Stadium when the affable gaffer’s resurgent Harare City lock horns with former champions Dynamos in the high profile tie of week 11 of the Zimbabwe Castle Lager Premier Soccer League (PSL) on Sunday.
Both sides will be looking to maintain the purple patch they have been enjoying in recent weeks after dreadful starts to the campaign.
Since taking over from Taurai Mangwiro early this month, Bambo has collected maximum points from the two matches he presided over while DeMbare are slowly finding their feet after a poor run of form saw the decorated Harare side facing relegation at one point this season.
Dynamos coach Lloyd ‘Samaita’ Mutasa completed his five-match probation with a convincing 2-0 dismantling of debutantes Ngezi Platinum FC at Rufaro Stadium on Sunday.
However, the trigger-happy DeMbare executive seems to have been charmed by Mutasa’s performances. The soft-spoken mentor collected nine out of 15 points to see DeMbare slowly climb up the ladder in the log standings.
DeMbare have reportedly been working on boosting their squad which has been short on the creative spark that suits Samaita’s passing game with deals for the midfield trio of former crowd favourite Denver ‘Mundikumbuke’ Mukamba, Archford Gutu and Ovidy Karuru believed to be inching closer.
Several non-performing players are set to be shown the door.
Bambo will rely on the return to form of striker Francesco Zekumbawire and Martin Vengesayi who scored in the 2-0 drubbing of Bulawayo City FC last Sunday.
The former DeMbare mentor has promised to fight for the championship this season.
On the other hand, Dynamos is drawing inspiration from the demise of its eight supporters who perished in a car crash on their way to Ascot Stadium a fortnight ago.
The inconsistent Harare giants have vowed to win the next eight matches in honour of their fallen supporters and will bank on star midfielder Masimba Mambare, who has found the form that made him one of the most feared attackers in the country during his time at archrivals Highlanders.
Mutasa endured the embarrassment of watching senior player Stephen Alimenda and the controversial Roderick Mutuma involved in a near fist fight over a free-kick.
These two players are likely to be shown the exit door as DeMbare look to shore up their misfiring outfit.
It will also be a battle of goalkeepers as both sides boast two of the best goal minders in the land.
Harare City have Maxwell Nyamupanedengu while Dynamos boast Warriors stopper Tatenda Mukuruva.
Action started on Wednesday when Highlanders, who have the most lethal strike force in the league this season, took on strugglers Border Strikers at Barbourfields Stadium on Wednesday.
The black-and-white army beat Border Strikers 2-0 to shoot to top of the log courtesy of a Bruce Kangwa brace.
The Bulawayo giants have scored a staggering 19 goals in their first 10 matches.
Today (Friday) Chapungu United take on Kelvin Kaindu’s struggling How Mine at Ascot Stadium.
The expensively built How Mine have gone for four matches without tasting victory and another defeat might signal the beginning of the end of Kaindu’s reign.
Chapungu are not doing any better.
Despite a rare victory against Border Strikers, the Midlands outfit sit just above the dreaded chop, having managed a paltry two wins from 10 matches so far this season.
Tomorrow, Ngezi Platinum host Border Strikers who, despite the league in its infancy stage, are headed for a quick return to Division One.
Border Strikers anchor the log with just one victory after nine matches.
In another fixture, Norman Mapeza’s flamboyant outfit, FC Platinum, take on surprise package Triangle FC at Mandava Stadium.
FC Platinum’s side were disconnected by veteran coach Sunday Chidzambwa’s ZPC Kariba in their last encounter a fortnight ago.
In Bulawayo, Rahman Gumbo will seek to revive his side’s campaign that has gone off rails when his reigning champions Chicken Inn play Tsholotsho FC at White City Stadium.
On Sunday Highlanders tackle ZPC Kariba in a top of the table clash that promises thrills.
Chidzambwa’s fiery side are second on the log standing with CAPS United at 21 points while Bosso have 23.
At the National Sports Stadium, CAPS United have a date with a Bulawayo City side that is currently defying odds.
Bulawayo City occupy number eight position on the log. At the Colliery Stadium, Hwange FC will play newcomers Mutare City Rovers to complete the weekend fixtures.
Fixtures
Friday June 24
Chapungu vs How Mine (Ascot Stadium) (Supersport Broadcast)
Saturday June 25.
Ngezi Platinum Stars vs Border Strikers (Baobab Stadium)
Harare City vs Dynamos (Rufaro Stadium)
Tsholotsho vs Chicken Inn (White City Stadium)
FC Platinum vs Triangle (Mandava Stadium) (Supersport Broadcast)
Sunday 26 June
CAPS United vs Bulawayo City (National Sports Stadium)
Highlanders vs ZPC Kariba (Barbourfields Stadium) (Supersport Broadcast)
Hwange vs Mutare City Rovers (Colliery Stadium)
All matches kick off at 15:00 hours