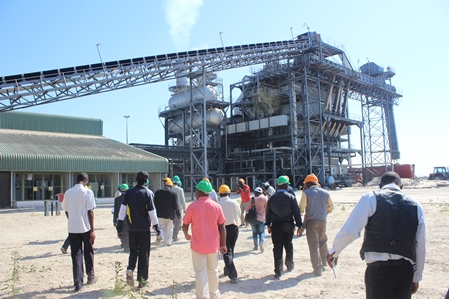 LAST week at Cleveland Shooting Range, President Mugabe said the economy was on the rebound and torched a storm.
Local detractors dismissed his assurance of an economic recovery as wishful thinking.
They accused him of living in the past and making forecasts divorced from reality.
But is it not true the economy is on the mend? Here are some indicators that point to the recovery.
The first is the finalisation of the billion dollar Essar/Zimbabwe Government deal to resuscitate the collapsed Zimbabwe Iron and Steel Company (ZISCO) in Kwekwe.
The deal includes construction of a 300 megawatt power station in Chivhu to fire the steel works.
Then there was the resuscitation of the Chisumbanje Ethanol Plant, employing over 3 000 people and has a sugar-cane outreach growing programme involving hundreds of small-scale growers.
The project has the potential to cut the country’s fuel import bill by over US$$200 million a year.
Another strong indication is Old Mutual, the London Stock Exchange listed conglomerate setting up funds for infrastructure and agriculture development to support Government effort to turn around the economy.
The signal is the company is positioning itself for a promising future that it foresees for the country.
This year, the country has witnessed an increasing foreign investor interest on Zimbabwe, particularly in the mining and manufacturing sector.
A consortium of Russian firms comprising Rostec, Vi Holding and Vneshekonombank (VEB) are keen to invest US$3 billion in developing the Darwendale platinum field.
The project will see production capacity of platinum rising to 600 000 ounces annually.
In addition, the world’s biggest steelmaker Arcelor Mital has since made an offer for Zimbabwe Alloys Chrome, the country’s troubled ferrochrome producer which is currently seeking investors.
ZimAlloys, 85 percent owned by Benscore Investments, controls 40 percent of the country’s chrome reserves, the biggest after South Africa.
Chinese investors have shown interest to inject at least US$25 million for the newsprint manufacturer, Mutare Board and Paper Mills. MBPM closed its newsprint division in November 2009 due to viability problems caused largely by under-capitilisation and antiquated machinery.
Consequently, Zimbabwe’s printing and publishing market has been depending on imported newsprint from South Africa costing the country US$15 million annually.
A number of facilities have started to inject funds into the economy.
Chinese Firm, Xuzhou Construction Machinery Group availed a US$100 million credit facility to support small-scale miners.
Small-scale miners will access loans from the Chinese firm to acquire equipment through the Commercial Bank of Zimbabwe (CBZ).
This will certainly improve viability of small-scale miners and raise gold production to 14 tonnes from the current four tonnes.
Early this year, Government secured a US$57 million loan from AFDB for rehabilitation of water, sewer systems and power infrastructure.
The funds are meant for the rehabilitation of water supply and sewer systems in Chegutu, Kwekwe and Masvingo.
Harare has got its US$144 million water reticulation facility from the Chinese.
Lined up also is the Barclays Bank Zimbabwe US$100 million loan facility to support local businesses. Last month, the European Investment Bank resumed lending to the private sector.
This can be slightly less than what the country requires, but if used wisely it is very meaningful.
Thirdly agriculture, which was expected to grow by nine percent has performed well after output of the staple maize, tobacco and sugar surpassed targets.
The country’s 2014 harvest for maize rose 82 percent to 1, 46 million tonnes, enough to meet annual domestic needs for the first time since 2003.
Tobacco output has surpassed the target of 180 million kilogrammes as 211 million kilogrammes of flue-cured tobacco has been sold at US$615 million compared to the 166 million sold during the same period last year.
The tobacco industry has become one of the fastest sectors to recover from the economic meltdown of the past decade accounting for 10,7 percent of the country’s Gross Domestic Product.
Tobacco exports are expected to show a further increase for the fourth successive year, a development that bodes well for the economy.
Sugar production also boasts of a sharp increase having recorded 544 700 tonnes against the projected upward revised 500 000 tonnes.
Initially, sugar production output had been projected at 475 000 tonnes, but was later revised due to increased rainfall.
Fourth, the banking sector is very sound having recorded a leap net profit of US$20,47 million during the first quarter of the year compared to last year’s US$0,47 million during the same period.
Important to note is the housing infrastructure development which received a major boost through the construction of 5 000 housing units and two schools by a Turkish company called Anadola construction.
In addition, ZIMRE Property Investments unveiled a US$5,6 million housing project while Government commissioned another housing project by Fidelity Life Assurance.
In the same vein, two cement factories are being constructed in Harare and Rushinga.
Last, but not least is the phenomenal growth of the Small and Medium Enterprises (SMEs) and the informal sector in the last decade, employing more people than the formal sector.
The economy is on the rebound.
The truth is everything cannot happen overnight.