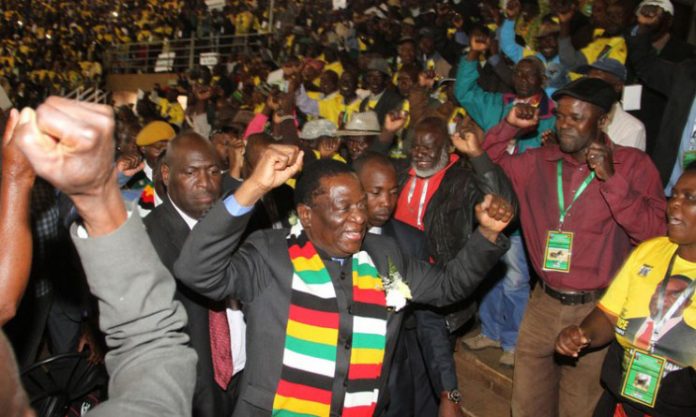 THEY came from far and wide and all the country’s 10 provinces were represented.
Some travelled by road during the night and made it to the City Sports Centre in Harare on time.
War veterans braved the chilly night and could not wait to meet a fellow comrade in Harare, President Emmerson Mnangagwa, who is also the Patron of war veterans.
These are comrades who shared the trenches during the war.
Liberation war songs lit up the venue as war veterans waited for their Patron.
The song ‘Nzira Dzemasoja’ was the anthem of the day, just as it was during the liberation war.
Later during his speech, the secretary for the war veterans in the Politburo, Cde Victor Matemadanda introduced everyone in the room, the high table included, as soldiers, comrades and as brothers and sisters who had the same dream then and now, to see the emancipation of sons and daughters of the soil.
He was right.
The director of ceremonies, Cde Munyaradzi Machacha was a key figure at the Chitepo School of Ideology during the war.
Cde Christopher Mutsvangwa who is the chairperson of the Zimbabwe War Veterans Association also played a crucial role in the Battle of Mavonde, while Vice-President General Constantino Chiwenga (Rtd), whose Chimurenga name was Dominic Chinenge, joined the war in 1973 and trained as a ZANLA cadre.
President Mnangagwa, whose Chimurenga name was Trabablas, is the only surviving member of the Crocodile Gang which bombed a Rhodesian locomotive in the then Fort Victoria (Masvingo) in 1964 and escaped death by a whisker after being sentenced to death.
This was President Mnangagwa’s inaugural meeting with war veterans.
Upon entrance, President Mnangagwa did not go straight to the high table.
Instead, he went round the venue waving at the comrades who sat at different bays.
After that, it was time for business.
Held under the theme, ‘War Veterans Advancing the New Dispensation’, the meeting tackled challenges faced by war veterans and their expectations regarding their welfare and political life from the new dispensation.
In his speech, Vice-President Chiwenga said war veterans were critical to the survival of ZANU PF and the nation at large.
He said the new dispensation had seen the reverting of the war veteran’s administration to the Ministry of Defence as a department in order to concentrate resources and improve on efficiency and effectiveness.
Said VP Chiwenga: “In this regard, the ministry is aware of the challenges facing the war veterans including outstanding school fees dating back to 2016.
“The Ministry is working with Treasury to ensure that all the arrears are paid in the shortest time that resources permit.
“However, I am pleased to announce that most of the school fees for all terms in 2017 and the first term of 2018 have been settled and payments for the second term are in progress.”
Vice-President Chiwenga urged war veterans who benefitted under the Land Reform Programme to register and benefit under the Command Agriculture Programme.
He encouraged those with A2 farms to obtain 99-year-leases which are bankable and facilitate easy access to some of the agricultural support programmes.
Addressing war veterans, President Mnangagwa said the task at hand was to rebuild the economy and re-align the politics with current imperatives.
Said President Mnangagwa: “I stand before you fully cognisant that I am a fellow comrade, freedom fighter with no superior endowments than any of us except that I have been chosen by the people of Zimbabwe as their President, at this moment in time.
“The task before us is to rebuild our economy, re-align our politics with current imperatives without deviating from the founding principles of our Party and revolution as well as chart a better future for the next generations.
“This will, however, never be accomplished by one person or a few select group of people but must involve all Zimbabweans, no matter their tribe, status or gender.”
President Mnangagwa urged the veterans of the struggle and the nation to work tirelessly in ensuring that the Constitution is enforced and that its full implementation is raised to a new standard.
He reiterated that it was the war veterans’ responsibility to reignite the hopes and dreams of fellow countrymen and not fail the hopes of comrades who sacrificed their lives during the armed revolution of Zimbabwe.
“We cannot change the past, but the present and the future are in our hands for us to shape,” said President Mnangagwa.
The new dispensation, he said, had resolved to increase the requisite safety nets to cushion war veterans with regard to their daily needs such as health care and timely disbursement of school fees for their children, among other requirements.
He said the new dispensation recognised the need to attract both domestic and foreign investments as a means to leapfrog the economy to catch up with other industrialised economies in Africa and the developed world.
“We have further set ourselves on a course to have Zimbabwe become a middle-income country with per capita income of US$3 500 by 2030, with decent jobs, broad-based empowerment, increased investments, free from poverty and corruption,” he said.
“Thus, strategies are in motion to ensure the resuscitation, retooling, expansion and modernisation of various industries, agriculture, mining and manufacturing, tourism, infrastructure development, ICT and the financial services.”
On the impending harmonised elections to be held in July, President Mnangagwa exhorted the war veterans to go out, full throttle and in huge numbers to campaign for a landslide victory for ZANU PF.
He underscored the need for Zimbabweans to always maintain peace, love and unity.