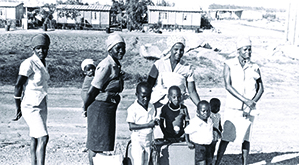 BEFORE colonialism, a Zimbabwean woman was responsible for her home, the field, harvest, pottery-making and many other activities that she knew from childhood.
She held a strong position in the family as a mother, sister, aunt, grandmother cousin or great grandmother.
In spiritual terms, the Zimbabwean woman could have been a sprit medium or svikiro, midwife, traditional healer or a powerful elder and leader of the family group.
However, most of these roles were to be denigrated and dismissed when colonialism and Christianity came.
When the missionaries came, they did not see these powerful roles.
All they saw was an African woman who was in need of the so-called civilisation.
They wanted her to be submissive.
This idea resonated very well with the Victorian values, whereby women were seen as the weaker sex waiting for men to marry them and protect them.
Overall, colonialism provided a way for the British to produce a position that the Europeans represented a superior civilisation.
Gender difference and the idea of equality was a foreign concept to how women were viewed in African culture.
How can a senior aunt or tete be seen as playing a subjective role when yet she commanded her brothers and her male nephews to obey her orders?
While women continued to work in the fields, the growth of the mining and agricultural industries under colonialism offered men opportunities to work outside the rural areas.
The city became a domain for men, while women were expected to stay in the village and look after the family.
This meant that women were to preoccupy themselves with domestic issues and leave employment in urban cities to men.
But not all women stayed in the rural areas as peasant farmers and buyers of consumer goods.
With rapid urbanisation, women found themselves in the city.
Those who migrated to the cities worked in the informal sector as ‘traders, petty commodity producers, sex workers or manufacturers and retailers of food and liquor’.
But the Europeans did not leave women’s lives uninterrupted.
As part of that ‘civilising’ goal, one of the colonial aims was to introduce Western consumer products to African women.
European traders argued that African traditional products were primitive and useless.
They introduced consumer goods like Lifebuoy soap, Lux, Surf, Ambi Skin Lightening cream or Impulse perfume.
In a book titled Lifebuoy Men, Lux Women: Commodification, Consumption, and Cleanliness in Modern Zimbabwe, Timothy Burke writes about the effects of British colonisation on Zimbabwean women.
The key questions Timothy Burke asks are these: “How do people come to need products they never even knew they wanted?
“How, did indigenous Zimbabweans of the 1940s begin to believe that they required Lifebuoy soap?”
He investigates the role of cosmetic products and how the idea of cleanliness was seen in European terms.
The products are presented in such a way that a woman who does not use soap from the European traders is somehow uncivilised.
This campaign to encourage women to buy European goods was done through direct marketing or advertising on radio or with posters.
The most effective way to target Zimbabwean women as consumers of Western households and beauty products was mainly done through the formation of church groups and women’s clubs.
The women were instructed to form many local and community-based women’s groups in order to improve skills in domestic management and the production of handicrafts.
Naume M. Ziyambi in Traders and Wives, Shona Women in the History of Zimbabwe, 1870-1939, notes that the earliest women’s groups in Zimbabwe were connected to missionary activity and the church.
Among them were the Wesleyan Women’s Groups and the Zimbabwe Methodist Church Women’s Ruwadzano which began in Southern Rhodesia around 1919.
Through these church groups and women’s clubs, African women were taught about God and cleanliness.
The colonial assumption was that African women were not clean before the missionaries came.
Missionaries therefore relentlessly preached about the virtues of European womanhood and how that would somehow get transferred to the lives of African women.
Caroline Schmidt also notes the following: “The Victorian ideal of virtuous wife, selfless mother, and tidy, industrious housekeeper was the goal for which all African women should be taught to strive.”
The clubs presented the Europeans with a strategic, but subtle way to impose colonial Western values.
Such ideas undermined the economic and political power of African women in traditional society.
Nigerian professor, Oyeronke Oyewumi argues that the Western concept of viewing women’s bodies as being ‘unclean’ or ‘clean’ was not a feature of the African society.
In Sticks and Scones: Black and White Women in the Home Craft Movement in Colonial Zimbabwe, Carolyn Martin Shaw argues that white women, primarily British settlers from South Africa and the United Kingdom, formed groups to socialise among themselves.
Her book presents a historical view on how Shona women were organised into various Christian groups.
The concept of Homecraft clubs was part of a colonialist approach to gain the support and loyalty of literate rural and urban women.
Shaw writes: “During a period marked by the idea of progress and the fear of African nationalism, these middle and upper-class colonial women reached out to African women, forming Homecraft clubs that taught various domestic tasks such as sewing and cooking.
“In developing the very popular Homecraft clubs, white women placed their skills in the service of the colonial state on a scale never before seen.”
Ironically, some of these Homecraft groups provided opportunities for women to mobilise themselves and secretly support the liberation struggle for independence.
The Zimbabwean women’s role firstly as consumers of Western products and then as secret agents within the women’s clubs presents a field of study yet to be researched and written about.