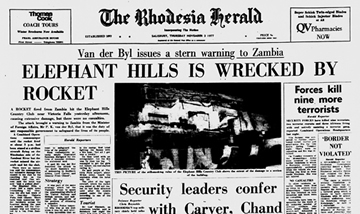 The story of ‘Pheneas Ncube’

I TREMBLED with fear when I saw Cde Sam Mbambo, a ZIPRA cadre, in a bar in Chinotimba Township, Victoria Falls, while I was having one-or-two with my fellow soldiers.
We were dressed in our Rhodesian army uniform and it was in November of 1977.
I was now an enemy to ‘ubhudhi Sam’ as we called him back in Bulawayo.
Cde Mbambo was a few years older than me and had left school at Mpopoma High in 1975 to join the liberation struggle.
I remember I was in Form Two when Cde Mbambo and some older boys from Lobengula left the neighbourhood to join ZIPRA forces in Zambia to fight the British colonial regime.
Cde Mbambo stayed a stone’s throw from our house, so I was among the first people to learn that he had gone to Zambia.
I was inspired.
Having finished my ‘O’-Levels in 1976 at Mpopoma High School in Bulawayo, I joined Radio Electrical and Musical Industries as a counter salesman because I wanted to raise money to go to Zambia to join ZIPRA forces.
However, on August 8 1976, my plans took a dramatic turn.
I was told by one Mackintosh, my supervisor, that it was our national duty to fight and crush the ‘terrorists’ (freedom fighters as they were called by whites).
A Rhodesian military truck was waiting for us at the car park.
There were only six African workers at the firm and we were not given the chance to go home and bid our relatives farewell.
They drove us to a railway station where we joined other young Africans, also on ‘Call-Up’.
We were about 200.
Imagine we were forced to go and fight our kith and kin!
Military trucks were waiting for us at the railway station in Salisbury (now Harare) to ferry us to Inkomo Barracks.
At Inkomo Barracks, I was subjected to other forms of racial discrimination.
Whites had their own mess where they had special meals.
Africans were served food from their own mess, the worst food.
Training was for three months and I still remember two instructors Sergeant William James and Sergeant Major Lambat.
Upon completion of training, we were told we would serve for six months in the army, then six months at work, alternately until the war was over.
I specialised in engineering and was deployed to Victoria Falls.
Therefore, on this particular day in Victoria Falls in 1977, much to my surprise, Cde Mbambo came straight to me and greeted me cordially as I was having drinks in a bar.
I was relieved.
He grabbed my hand and we went outside the bar.
I told him of how I was forced to join the Rhodesian army.
To him, it was a blessing in disguise.
As long as I remained in the Rhodesian army, it was to the comrades’ advantage.
We arranged for a meeting the following day at a secluded place in Chinotimba Township.
At that meeting, Cde Mbambo asked me if I had access to Elephant Hills Hotel.
Fortunately that area was in my operational zone and I readily agreed.
I was given the task to go and do a sketch plan of the hotel and submit it to Cde Mbambo.
He told me the mission was highly classified, hence I was supposed to communicate with him only.
Since I was in the Rhodesian army, getting the sketch plan was not difficult as we used to frequent the hotel on our daily security routines.
I managed to gather all the details of the hotel in two visits and I was very careful not to attract the attention of my ‘fellow’ Rhodesian soldiers.
I met Cde Mbambo at yet another place we had agreed after I had drawn the sketch map and I was given another task of stealing batteries of signal radios.
This was the most dangerous task, but I managed to steal the batteries from the Quarter Master’s office from our military base.
This time when I went to hand over the batteries, Cde Mbambo told me his intention was to attack Elephant Hills Hotel.
I had to pretend to my fellow soldiers that everything was normal because alerting them would be betrayal and I knew the consequences.
I was told to avoid going to the hotel in the next 36 hours hence I suggested together with other soldiers we go to Wankie (Hwange) since we had last patrolled the area a fortnight ago.
When the news of the bombing of Elephant Hills Hotel came, it was after two days of our patrol in Wankie.
The following day we were called back to tighten security in Victoria Falls.
I was shocked, but thrilled at the same time.
The hotel was decimated.
Rubble was all over the place, with security details everywhere.
I later saw Cde Mbambo after the war.
This is my first time to disclose this story since 1977.
Compiled by Emergencey Mwale-Kamtande and Fidelis Manyange