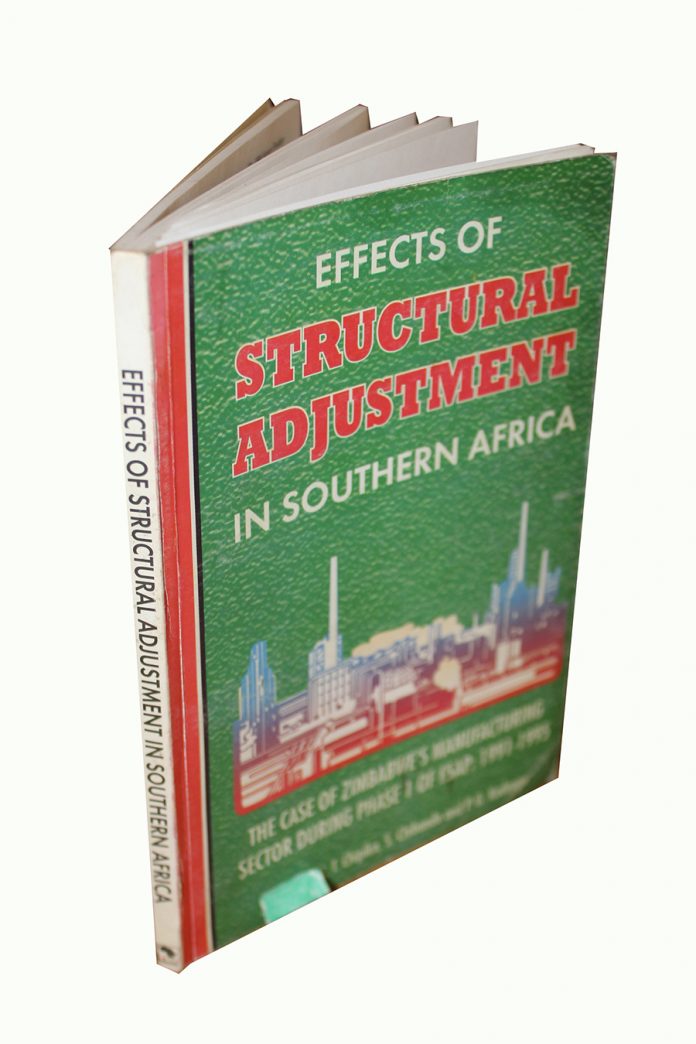 THE Economic Structural Adjustment Programme (ESAP) is a neo-liberal market-driven policy measure adopted in Zimbabwe as a prescriptive solution to the economic crisis of the 1980s.
It was introduced in Zimbabwe in October 1990, but started in March 1991 after a meeting with aid agencies and the World Bank in Paris.
Hence, the ESAP framework contained the standard features of the World Bank and IMF economic reform strategies.
ESAP entailed the reduction of Government expenditure by retrenching 25 percent of the civil service, withdrawing subsidies, commercialising and privatising some state-owned companies and introducing user-fees in the health and education sectors, among others.
However, J.T. Chipika and others, in their book Effects of Structural Adjustment in Southern Africa, note that although ESAP was accepted as a way of achieving sustained economic growth in many African countries, many economists have dismissed the effects of the structural adjustment and stabilisation programmes as disappointing.
The authors note that: “There has been much talk in Zimbabwe about the negative effects of the reforms and specifically on the response of the manufacturing industry and the performance of manufactured exports.
Historically, Zimbabwe’s growth strategy, since the colonial era through to the post-independence period, has been built on the basis of the private sector playing a central role in the country’s performance.
The Government also participated in the heavy social sector expansion with the aim of redressing colonial, social and economic injustices.”
Chipika and others say prior to ESAP, unlike its regional trading partners whose manufacturing sectors were still predominated by the production of consumer goods and the processing of primary products, the Zimbabwe manufacturing sector had already advanced into engineering, chemical, metal and transport industries.
They further argue if ESAP had been successful, Zimbabwe had the potential to become the first new industrialised country in southern Africa.
However, instead of yielding the desired results, ESAP made the economic situation worse.
“According to UNICEF (1991), SAPs lack a human face since the poor have suffered disproportionately from the adjustment and stabilisation measures,” write the authors.
“Reforms have, therefore, failed to protect goods and services consumed by the poor such as Government provisions in health and education.
“The initial results of the studies carried out by UNICEF (1983) on adjusting countries indicated a cross country worsening situation of children and women, general decline in GDP which was transmitted to the poor and the vulnerable.”
Chipika and crew say the re-introduction of both medical and school fees in adjusting countries created panic and outrage since the most affected people were the poor and women.
It is imperative to note that during that period, primary school education was free in Zimbabwe and it laid a foundation to the country’s high literacy rate which Zimbabwe boasts today.
ESAP tried to derail that progress through the mandatory introduction of school fees.
It also contributed to gender inequality because families ended up prioritising educating the boy-child at the expense of the girl-child.
It resulted in gender imbalances in the political, health and business sectors among others.
Despite this setback, President Robert Mugabe has made strides in the uplifting of the girl-child.
Affirmative action was taken and a Ministry of Women’ Affairs was created and today Zimbabwean women are involved in leadership roles.
Turning to the Zimbabwean dollar.
The devaluation of the Zimbabwean dollar and inflation contributed to brain drain as professionals migrated to other countries in search of the so-called ‘greener pastures’.
In that process, it robbed Zimbabweans of the values of family structures as parents left their children in the hands of maids and guardians.
Hence, Chipika and company argue ESAP was an extension of policies that work in Washington when they say: “Although some countries have dubbed their SAPs ‘homegrown’, they have only adopted what was made in Washington.
Structural adjustment is therefore essentially a World Bank project, with some limited, if any, involvement by aid recipients.
Usually experts are brought into the country intending to carry out reforms, to conduct research leading to the design of the programme or to brief officials in key ministries or organisations such as Finance, Agriculture and Central Banks.”
The authors say SAPs imposed on host governments as a condition for donor funds support and African policymakers who entertained no illusions about the efficacy and efficiency of SAPs have adopted SAPs under duress so as to secure much needed loans.
However, President Mugabe has stood firm on his beliefs and disregards the conditions set by the IMF and World Bank because they are not compatible with the demands of the development in Zimbabwe and other developing nations, especially in Africa.
Hence, Zimbabwe is not a preferred recipient of funds from Western financial institutions.
This stance by President Mugabe, coupled with the successful Land Reform Programme which restored land to the black majority, has made it near impossible for Zimbabwe to get funding.
Despite all this, Zimbabwe’s success story continues with the country enjoying a bumper harvest as a result of a homegrown initiative dubbed the Command Agriculture Programme.
The initiative has spread to other sectors which include livestock in order to improve the national herd and resume beef exports.
Command agriculture comes under the Food Security and Nutrition Cluster of the country’s homegrown blueprint, the Zimbabwe Agenda for Sustainable Socio-Economic Transformation (Zim-ASSET).